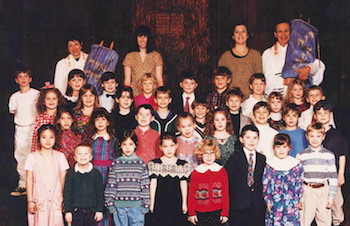 A teacher shapes her students in many ways, sometimes just by listening. Lena Benikov, or Mora Lena as her students came to know her, retired this year after more than two decades at Congregation Beth Israel’s religious school. She found that the simple act of listening was the best way to connect with her students. “Why should they pay attention to me if I don’t pay attention to them?”

Besides listening, Lena cannot overstate the crucial role that Pokemon cards had in her success and longevity as a teacher. Lena often found common ground with her students by actively listening to them tell her about the show-and-tell tchotchkes they would invariably bring to class. “That’s why when they bring something from home, a toy or a collection we should pay attention to them. I am so happy for Pokemon cards, all these years.” When the children would proudly show her their be- loved treasures, Mora Lena would encourage them to pass them around to share with the class. This act of sharing helped to bring the classroom together. “It’s so much a teaching moment.”

Part of the last wave of Jewish refusniks to leave the former Soviet Union, Lena arrived in the United States in 1990 with her husband and then 9-year-old son, Alex, and pregnant with her daughter, Michelle. A teacher in her native Ukraine, she had to demonstrate to the U.S. government that she joined the Communist Party only out of necessity to be able to teach. “I was always a teacher. That’s why coming to America to teach was like coming home.”There was no religious school at all in the U.S.S.R. “We were Jews by nationality, not religion.”

In 1991 she began teaching at CBI, first as a kindergarten teacher and later first grade. When it came time for her own daughter, Michelle, to attend kindergarten at CBI, she would only go if she could sit in Mommy’s class! Lena especially enjoyed teaching first grade because at ages 6 and 7, “they still love school.” She explains that at that tender age, “It’s all about connecting with friends. Kids absolutely learn only through relationships. Even a teacher can be a friend.”

As for why Lena is retiring now, she says that after 22 years, “It’s sort of time for me.” She is currently back at school herself, attending Portland Community College as she pursues an as- sociate degree in art. As she begins the next chapter in her life, Lena insists she will be back to teach her grandchildren.

Lena acknowledges that she will miss her students. “The kids at our synagogue (CBI) are very special. That’s hard to find.” She thinks the parents are pretty special too. “Jewish parents spend a lot of time with their children.”This is critical for build- ing trust so that years later, when the stakes are higher, they will still listen to their parents.

As Mora Lena advises, “Always listen to your kids and it will pay back later. It all starts with a Pokemon card and an interest in them.”