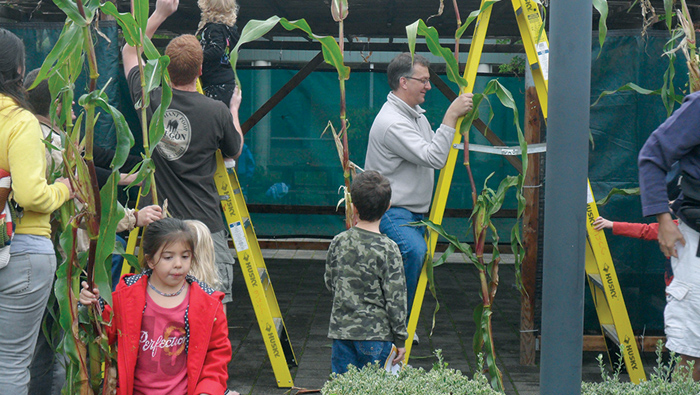 In the Book of Leviticus, Moses tells the Israelites that beginning on the 15th day of the seventh month (counting from Nissan, the month containing Passover), “You shall live in booths seven days; all citizens in Israel shall live in booths, in order that future generations may know that I made the Israelite people live in booths when I brought them out of the land of Egypt, I am the Lord your God” (23.42-43). The most remarkable aspect of Sukkot in Israel, for someone who observed the holiday in various locations in the States before making aliyah, is the fact that the idea of obeying Moses can seem like a pleasant one.

Whether Sukkot comes at the end of September or in October, the climate in Israel is perfect for being outdoors, especially at night. One never has to worry about rain, and even if the sun is still hot during the day, there is usually enough of a breeze to make a meal inside the sukkah (which by Jewish law must contain more shade than sun) seems more like a picnic than an onerous religious ritual.

Jews in the States are usually not that lucky. In Miami, for example, where I lived for six years before making aliyah, Sukkot occurs in the middle of summer (summer in Miami being mid-April through early-November). Daytime Sukkot meals in Miami leave one drenched in sweat, and many families eat some of these meals indoors. At the other extreme, for my cousins in Chicago, the most vivid memory of Sukkot is of eating soup with gloves on, hovering over their steaming bowls for warmth. And it often happens that in many parts of the States the rabbi’s brief remarks on Sukkot eve sound more like “notes from the rain bunker,” covering such topics as “Kiddush in drizzle” and “when to throw in the towel.”

In Israel, the weather is so nice that it is indeed much more common to find people doing what Moses had intended: living in the sukkah. There are people who move their dining room tables and chairs into the sukkah, along with their china-laden buffet. At night these people will not just make do with sleeping on floor mattresses; they move their whole beds outside to their sukkah.

There is just one problem with the pleasant weather in Israel on Sukkot: it ruins a popular rabbinical teaching. Remember the reason given for the booths in Leviticus? The Sukkot are reminders of the temporary booths used in the Exodus from Egypt. A classic rabbinical question therefore is: if so, if the booths are connected to the Exodus, then why was the Sukkot holiday not assigned to one of the months more immediately following Passover? Here is the traditional answer: A Sukkot in the late spring or early summer would not demonstrate a Jew’s commitment to Judaism. After all, the whole world enjoys going outside at that time. But when a Jew builds their temporary hut in the fall and must fight the elements, they show they are doing so not for pleasure but because they are following God’s commandment.

What are we to say, then, about Sukkot in Israel? Given that September and October are just as mild as May or June, perhaps we should move Sukkot in Israel to its proper historical place in the year? Aside from the fact that I believe the Chief Rabbinate would tend to give a little more weight to centuries of Jewish custom than to the arguments of this column, I like to think of this situation as our chance in Israel to show solidarity with you in the diaspora.

'Sukkot in Israel: The weather is fine' has no comments