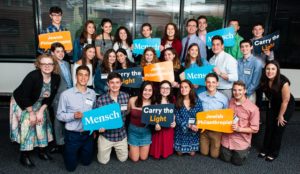 ered data from 17,576 Jewish teens between the ages of 13 to 19 in a national survey administered through the 14 participating Jewish youth groups.

The largest study ever on American Jewish teens paints a picture of a cohort that simultaneously embraces family, Jewish culture, and friends, while also grappling with anxiety and pressure to succeed—in a world permeated by social media and constant communication. Researched and written by The Jewish Education Project and Rosov Consulting, GenZ Now: Understanding and Connecting With Jewish Teens Today shares survey results and interview responses from a total of 17,576 teens to reveal data and insights about their interests, challenges, and passions in all facets of life, in unprecedented depth and scope.

The report is filled with findings covering a range of areas:

·        Jewish teens like their parents and value their perspectives. Teens enjoy spending time with their family and often look to their parents to help them make sense of the world.

·        Being Jewish is often about family and is an expression of family bonds. Jewish beliefs and practices are closely linked with family in the hearts and minds of teens.

·        Teens in the GenZ Now study believe adolescents need help with social-emotional issues. Similar to other American teens, teens in this study named coping with anxiety, academic pressure, self-esteem issues, and failure as the biggest needs of their peers.

·        Jewish teens see positives and negatives to social media. Teens acknowledge that social media can cause them stress, but many also believe it helps cope with stress, connect with friends, and organize for change.

·        Americans increasingly describe themselves as having “no religion.” But even many “no religion” teens—a sizeable minority in the study—are interested in engaging with Judaism

at certain points in their life. Moreover, the majority of engaged teens who responded to our survey unequivocally identify as Jewish and also report belief in God.

·        Teens feel Jewish culture is something to celebrate and most commonly use the word “culture” to express what it means to be Jewish. The concept of Jewish culture captures the elements of being Jewish about which teens feel good.

On Anti-Semitism and Israel:

·        Many of the teens interviewed for GenZ Now report anti-Semitic experiences but do not feel personally threatened or see it as a primary lens to understand their life experience.

·        Teens from the study are interested in Israel and believe that as Jews they have a special connection to the land and country. They want to ask trusted adults questions about Israel, and most teens who have not traveled there yet, hope to do so one day.

Researchers also looked closely at the influence of 14 Jewish youth-serving organizations (YSOs)—representing a range of ideologies and interests—on teens and teens’ abilities to flourish in life as defined by a 14 item framework that was developed in the 2016 Generation Now study (Available at JewishEdProject.org/GenerationNow). They found that teens who participate with YSOs feel more of a connection to being Jewish, feel better about themselves, have deeper relationships with family, friends, and mentors, and feel empowered to make change in the world.

“A major shift is occurring in how the Jewish community understands its relationship to teens,” adds David Bryfman, Chief Innovation Officer and incoming CEO of The Jewish Education Project. “We no longer engage teens simply for the sake of Jewish continuity.  Rather, GenZ Now is a call to engage teens on a deep level because Jewish experiences and community can be sources for their own personal growth and well-being. Teens care deeply about their friends, family and the broader world around them—and they want to create change that positively influences peoples’ lives. Jewish engagement that is meaningful to them will integrate those values and desires.”

Researchers gathered data from 17,576 Jewish teens between the ages of 13 to 19 in a national survey administered through the 14 participating YSOs: BBYO, Bnei Akiva of the US and Canada, The Bronfman Fellowship, CTeen, Diller Teen Fellows, Friends of Israel Scouts/Tzofim, Habonim Dror North America, JCC Association of North America, Jewish Teen Funders Network, Moving Traditions, NCSY, URJ Youth/NFTY, USY/USCJ’s Youth Movement and Young Judaea. Over 800 of these teens also wrote comments about how they think about being Jewish.

“American Jewish teens as a group are deeply curious and motivated; and they understand the challenges of navigating a complicated modern world,” adds Jeffrey Kress, a member of the GenZ Now Advisory Committee and the Dr. Bernard Heller Chair in Jewish Education at JTS. “From a policy perspective, the data suggest that YSOs can have a very positive influence on the lives of teens. We need to explore how we can amplify this work and better support leaders who have deep and important relationships with teens during such formative life years.”

“Our GenZ Now research is premised on a framework of thriving,” adds Wendy Rosov of Rosov Consulting. “What conditions do teens need for optimal development? This study helps us understand how participating in Jewish activities helps teens grow in different aspects of their lives – personally, socially, and Jewishly. So when we hear that they like being with their family, engaging in Jewish holidays and culture, asking questions about Israel, and more—those are important findings to understand and to bear in mind when creating programs and initiatives to engage and support teens.”

ABOUT THE JEWISH EDUCATION PROJECT:

The Jewish Education Project® is a 501(c)3 nonprofit organization that inspires and empowers educators to create transformative Jewish experiences, helping children, teens, and families thrive in today’s highly complex and challenging world. Nationally renowned for its leadership training and professional development, The Jewish Education Project works directly with thousands of educators from more than 500 Jewish schools, congregations and nonprofit ventures. Together, our work impacts the lives of more than 160,000 Jewish children and families of all backgrounds, in metropolitan New York and throughout North America.

Founded in 2008, Rosov Consulting is a professional services firm helping foundations, philanthropists, and nonprofits in the Jewish communal sector meet their goals, assess progress, and make well- informed decisions to enhance impact. Working at the nexus of the funder and grantee relationship, our expertise includes evaluation and applied research, strategy development, launching new philanthropic initiatives, and systems coaching. We utilize our range of life experiences and knowledge to best serve our clients.