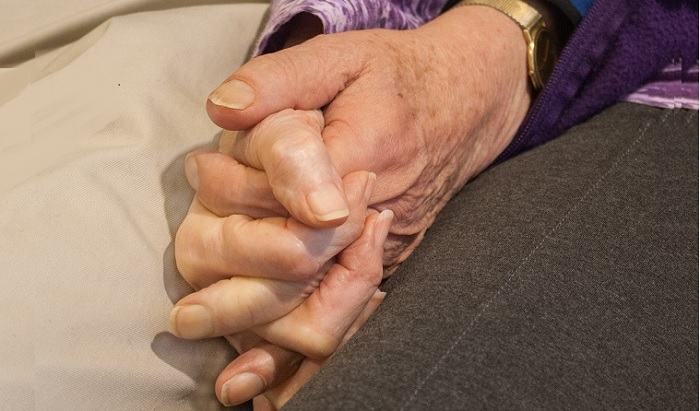 Maggie Portrait, 86, has known her husband Daniel, 90, since she was 4 years old. She attributes their successful 65 years of marriage to being in love, accepting the bad times along with the good and not entering into marriage lightly.

“We were both serious about marriage,” says Maggie. “We weren’t going to ‘try it’ and see if it worked.”

“It’s easy to get hung up on either the good times or the bad times,” she adds. “But we had the attitude that both of these will pass and it does.”

Born in London, the couple now lives at Cedar Sinai Park – Maggie at Rose Schnitzer Manor and Daniel, who has dementia, in one of four Greenhouse households in the Harold Schnitzer Center for Living.

“I go to have dinner with him every night and spend a couple hours hanging out in his apartment after dinner,” says Maggie of living on the same campus but in different apartments to meet their differing needs. “He comes here (the Manor) sometimes, but lately he doesn’t seem to enjoy it. He feels safe and comfortable in his own environment. … It (dementia) is a difficult illness for me to understand.”

“We both had a serious fall,” explains Maggie of the long ago accident. “A balcony collapsed at a party, and we both fell onto a concrete patio. Dan hit his head and had to have surgery.”

CSP offers several avenues of support for couples who need different levels of support. Rose Schnitzer Manor Assisted Living offers quality care in an elegant community supporting a vital lifestyle. When one partner needs additional support, the CSP campus has several resources. Following a fall, surgery or serious illness, residents of the Manor can rehab on campus at the Robison Health & Rehabilitation Center until they are ready to return to their apartment. Additional support in their own apartment is available through Sinai In-Home Care if one spouse needs additional help with daily activities. If one spouse needs a more structured environment during the day, they can attend the Adult Day Services program from one to five days a week. When a spouse is in need of long-term nursing care, they can make their home in one of four Greenhouse households at the Harold Schnitzer Center for Living while their partner maintains their apartment at the Manor; the spouses can dine and visit together in whichever building they wish. In Robison’s Post Acute unit (all private rooms with bathrooms), the spouse who is not receiving services is welcome as a guest and can spend the night and receive meals.

Although they have experienced their share of the good and bad of life, Maggie says their story is similar to many of her generation. But she adds, “Talking to the Holocaust survivors who live here, I think we had it pretty easy.”

Maggie’s  and Dan’s mothers had known each other as teenagers, so when both families moved to the same street in London, the mothers resumed their friendship and Maggie and Dan played together. When the drumbeat of war started rolling out of Germany in the 1930s, both families moved to High Wycombe outside of London. Dan and Maggie’s cousin, Eric, were classmates and became close friends (Eric served as best man at their wedding). Maggie and Dan reconnected as teenagers at a Jewish youth dance when Eric reintroduced her to Dan, who asked her on a date; they attended a comedy show with Dan’s parents.

“I remember telling my parents, ‘They (Dan’s parents) are the most handsome couple I’ve ever seen,’ ” says Maggie, adding she thought Dan took after them.

“The war interrupted our lives,” she says. Dan joined the Navy when he was nearly 17. He stayed in four years.

After the war at a birthday party for Eric, Maggie and Dan met again.

“I was attracted to him,” she says with a smile. “He was fun to be with; he was outrageous. He must have been a devil in school – one of those students always up to something.”

But Maggie’s parents didn’t want her dating just one boy when she was 17, so she and Dan both dated each other and other people, too. Then one night Maggie invited Dan to an election party (“He was very interested in politics and very knowledgeable, which I was not.”) “We were all watching TV and there was a huge crowd at Trafalgar Square,” says Maggie. “I said, ‘Let’s skip out and go to Trafalgar Square.’ We skipped out, but it was my party so we couldn’t stay long. … That was the beginning.”

Two years later they married in their synagogue.

In the late 1950s, they moved to San Francisco with their two sons, Mark and Simon.

The family has flourished in the states. Mark, 64; Simon, 62; four grandchildren; and four great-grandchildren all live in the Portland area. Mark is semi-retired from his own advertising agency, and Simon closed his furniture store in Medford to move here but remained in the furniture business.

While dementia is one bad thing that won’t pass, the couple still hang on to the good they have together. “Perhaps that is why we’ve survived in our marriage – we simply love each other,” she says.