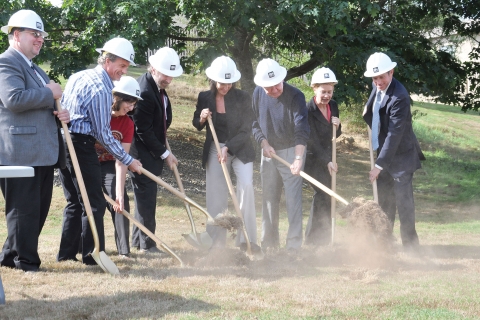 Kehillah Housing, a two-story, 14-apartment building for adults with developmental disabilities, will offer residents affordable housing near public transportation and access to an array of social services.

The board of Cedar Sinai Park, where Kehillah Housing is being built, expanded its historic mission of serving seniors to include adults with special needs.

Major funding for the project came from the U.S. Department of Housing and Urban Development, which awarded $2,035,800 to the project under the Frank Melville Supportive Housing Investment Act. Additional funding came from Oregon Housing and Community Services, Portland Housing Bureau, National Council of Jewish Women, Wayne D. Kuni and Joan E. Kuni Foundation, Jerry and Helen Stern and the Stern Family, as well as many other individual donors.

A stand-alone nonprofit organization, Kehillah Housing will support residents’ inclusion in the community through social activities and supported employment. A number of service providers, including Jewish Family & Child Service, will help residents transition into independent living.

'Special needs affordable housing on the way' has no comments