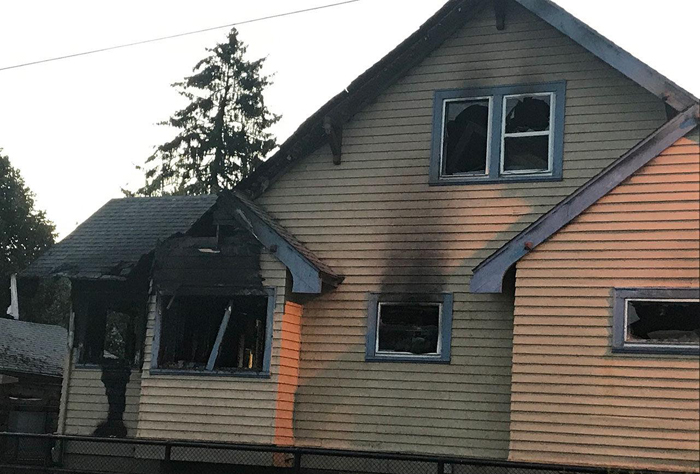 Firefighters put out a large fire Wednesday, Aug. 19, at the Chabad Center for Jewish Life – SW Portland — the second at the building in five days.

The building suffered extensive damage from the blaze, which broke out in the early morning, according to local news reports.

Fortunately, the Torah scrolls had been removed from the building months ago, when the pandemic first started.

“Thankfully because of COVID we’ve been closed, or off our regular schedule, so we moved the scrolls and are very happy and grateful that happened because they weren’t here to experience that,” says Rabbi Wilhelm.

It is unclear what caused the fire. Lt. Rich Chatman of Portland Fire and Rescue said the progression of the fire, along with the time of night it happened, leads investigators to believe it is suspicious.

“They’re not able or ready to say this fire is arson,” Lt. Chatman said in a news report. “There are still a lot of possibilities as to what caused this fire.”

Both fires started in the upper floor of the building and the causes are under investigation.

“Our mission is to spread the love of our Creator, the love of Torah and the love of our fellows. Together as a community we passionately commit to doubling and redoubling our efforts in doing so,” stated Rebbetzin Mimi Wilhelm in a Facebook post on her private page.

Anyone with information about the fire or other crimes in the Hillsdale neighborhood is urged to contact authorities.

Donations are being accepted at jportland.raisegiving.com.