Sarah Gertrude Shapiro escaped her job as a producer on “The Bachelor” to find true love and professional and personal success.

After a couple of years in Portland communing with horses to restore her equilibrium, Sarah is now living back in Hollywood with her wonderful husband, Jacinto, and young son, Moshe. 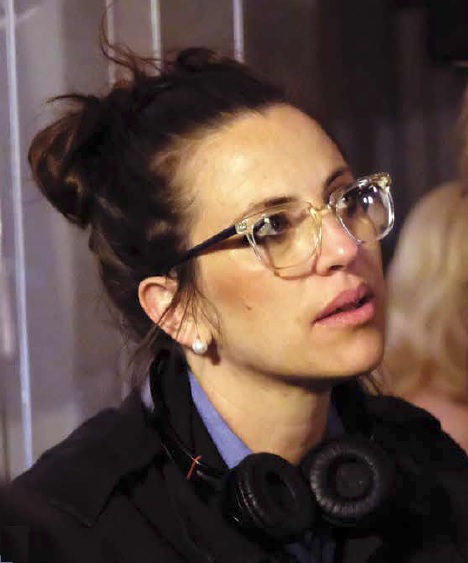 As much as she is enjoying family life, her career is also soaring.

In the fall she signed a two-year overall deal with ABC Studios to develop projects for ABC Signature Studios and ABC Studios.

She is also finishing a screenplay for Amazon Studios about women who were kidnapped and enslaved by ISIS. Most of the enslaved women were from the Yazidi community, a Kurdish religious minority in the region ISIS seeks to control. But one of the enslaved women was an Arizona woman who went to Syria as a volunteer with Doctors Without Borders.

According to a 2017 article on Deadline Hollywood (deadline.com): “One of the stories she (Sarah) is researching is of Kayla Mueller, the young, Christian aid worker from Prescott, AZ, who was held captive and made a sex slave with a Yazidi girl at the home of ISIS leader Abu al-Baghdadi. Mueller was held captive for 18 months. … The Yazidi sex slave eventually escaped and lived to tell the tale, but Kayla did not.”

Early reports described the film as a portrayal of the women who escape and create a 100-plus female army fighting ISIS. Sarah’s research has led many directions and she is now busy writing.

Sarah’s professional rebirth began while she was living in Portland. She drew on her disenchanting experience at “The Bachelor” to write and direct “Sequin Raze.” She created the short film in 2012 for the American Film Institute Conservatory’s Directing Workshop for Women, which, per AFI’s website, is “a hands-on training program committed to increasing the number of women working professionally in screen directing.” Filmed in Portland, “Sequin Raze” won an honorable mention at SXSW’s (South by Southwest’s) Short Film Jury Awards. The film evolved into Sarah’s successful series “UnREAL,” a fictitious behind-the-scenes glimpse into the chaos surrounding the production of a dating competition program. “UnREAL” premiered on Lifetime on June 1, 2015.

When the series ended after its fourth season last year, it had received an American Film Institute Award and two Emmy nominations. It was also nominated for a Gotham Independent Film Award and three Critics’ Choice Awards, with Constance Zimmer winning the CCA for Best Supporting Actress in a Drama.

Originally from Santa Barbara, CA, Sarah started writing when she was 5 years old. She has pursued filmmaking ever since she was 16 and saw “8½,” an Italian surrealist comedy-drama film directed by Federico Fellini. After seeing the film, she shot a roll of black and white Super 8 film and knew filmmaking was her calling. Sarah graduated from Sarah Lawrence College with a degree in fiction writing and filmmaking. During college, she spent a summer in Portland and made her first film at the Northwest Film Center. After graduation, she interned at Killer Films with Christine Vachon as part of the New York indie film scene.

This month, Sarah turns 41. In the following interview, Sarah shares her thoughts on reality TV, Judaism, feminism and family life. Her replies have been edited for brevity and clarity.

I read a couple of articles from the past year about your thoughts on reality TV – one regarding how the concept propelled Trump’s rise, and two, that it doesn’t need to be real, just entertaining. Are you considering another reality show in conjunction with ABC?

To be honest, I never meant to work in reality TV. I went to Sarah Lawrence for Fiction Writing and Filmmaking and considered myself a “Serious Writer.” “The Bachelor” was a day job for me when I first moved to Los Angeles and was playing in bands and writing short stories.

I initially took a job on a different show, “High School Reunion.” While there I got approached by this lady who said, “I’ve heard good things about you kid, I want you to come work on my show.” She told me it was “The Bachelor” … and laughed when I explained I was a “radical feminist, hence pretty sure you’d hate me.” Then she told me to check my paperwork. It turned out I had signed an unlimited contract with that company. I couldn’t find a lawyer who would take on Warner Brothers to get me out of it. So I was stuck working on “The Bachelor” … for years.

Can you share a bit about your time as a producer on “The Bachelor” and why you wanted to leave?

When I worked on “The Bachelor,” my job was to manipulate the contestants into having breakdowns. That involved giving them terrible advice, depriving them of sleep and faking complicated manipulative friendships. Some of the worst things I did were on the night of the proposals. I would go to the hotel room where girls were staying and say, ‘I’m going to lose my job for telling you this, but he’s going to pick you – he’s going to propose.” After they got dumped, I’d join them in the limo and was told to drive them up and down the 405 until they cried, and “if they don’t cry – ‘You’re Fired.’”

In hindsight being fired would have been a great solution to my problems. 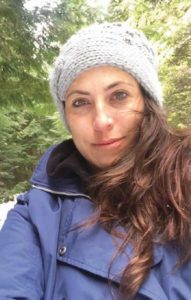 Why did you choose to move to Portland when you left “The Bachelor?” Had you been here before?

I took my junior year off in college and got a house off Belmont with my friends. I fell head over heels in love with Portland. I was a waitress at the Pied Cow, biked through Cherry Blossoms and made Super 8 movies. It was dreamy dream town. I wanted to drop out of college and stay in Portland forever, but my dad threatened to duct tape me to a plane and send me back to the East Coast to finish school.

Portland was where I fell in love with filmmaking; I made my first film ever there. There was a place called the Northwest Film Center, and at the time Miranda July, Matt McCormick and Vanessa Renwick were making movies there. My first movie was called “Jelly” … set in Portland and really fun.

Were you involved with the Portland Jewish community while you were here?

I went to High Holidays and did Pesach with friends. I’ve always embraced my Judaism, but have come to practice it more formally in recent years.

How did you meet your husband?

I had been so consumed with work for a decade that I had basically forgotten to make time for relationships. It was also scary for me to make myself vulnerable, open myself up to rejection. Writing alone is way more comfy for me. But when my father was diagnosed with cancer, it was a giant wake-up call. I suddenly forced myself to get out there and date; it was terrifying for me – I’m totally into “stranger danger.”

I had some seriously terrible dates and then … one that wasn’t terrible at all. 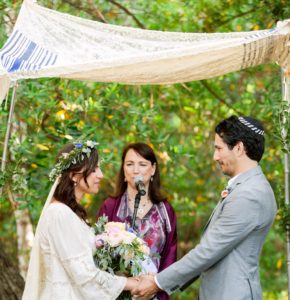 Where was the wedding?

The wedding was at a ranch in Santa Barbara where I rode horses as a kid. Rabbi Amy Bernstein officiated under a chuppah made from my grandfather’s tallit.

We are raising our son Jewish but cherish both sides of his heritage. My husband is Mexican American.

When/why did you move back to California?

After I sold “UnREAL,” I moved back to make the TV show. It’s the place to be for the industry. I had such great relationships in Portland, but to work in TV on the scale that I wanted to, I had to leave. But it was absolutely heartbreaking to leave Oregon.

How old is your son now? Does he like any Jewish rituals or foods?

He is 14 months old and loves challah! We don’t normally let him eat bread, but when we go to Shabbat mornings at the Silverlake JCC, he just about butt tackles other toddlers to get to the challah. He has terrible manners about it. And he loves the “Shabbat Shalom!” song. 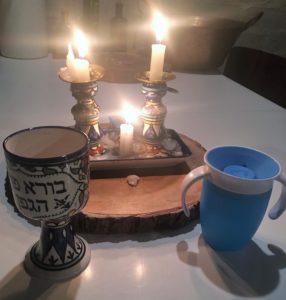 What was your Jewish upbringing?

Growing up we celebrated High Holidays in the woods, under scratchy wool blankets with my grandparents. It took me a very long time to understand their aversion to synagogue. It had to do with the old country and pogroms and some aversion to the trappings of organized religion, but a deep spirituality and Jewish identity.

Is there any Jewish concept, ritual or holiday that particularly speaks to you?

The Kol Nidre gets me every time, and every year the High Holidays are a time of deep reflection for me. My Jewish upbringing also involved all of the secular values that I’ve only learned to adore the older that I’ve gotten; I want to pass them along to my son.

Do your Judaism and feminism overlap, complement each other, or conflict?

Mostly overlap and complement each other. However, it’s been a problem with some of my old school relatives along the way.

What feminist ideal are you most driven to achieve?

Equality work wise – to dismantle the myth of the mad-male genius and to get people to start calling women geniuses! At different, perhaps more cynical times in my life, I thought equality would be when a mediocre, middle-aged woman showing up on set high and unprepared and still get hired again and again – because I’ve seen many men get away with this. Somehow dismantling the idea that men can be creators and behave terribly, but women are just there to support them.

So my feminist ideal is having a full range of opportunities for women to be considered full creative people and thinkers. And for women to be valued on the same playing field as men in terms of their creativity and output – whatever that is.

Whether that’s decadent self-care, ill-planned desert road trips, sailing around the world with someone questionable or a cozy craftsman home with many, many children, a compost pile and a subscription to The New Yorker.

For us to serve our desires and feel entitled to our own joy, rather than working ourselves into the ground in situations where the odds of ease and happiness are clearly stacked against us. That kind of martyrdom is taught early and rewarded. For me, it doesn’t mean leaving the industry; it just means choosing well and making sure to take care of myself, which actually works out better for everyone.

What project are you most proud of to date?

The pilot of “UnREAL.” After years of rigorous work and persevering through some daunting challenges, I was finally able to make it exactly what I wanted it to be, which is incredibly rare. I couldn’t imagine a better articulation of the idea or a stronger cast and am so grateful to everyone who collaborated on that ride.

Has your film on girls kidnapped by ISIS been released yet?

It has not – we’re still in the writing process with it, super excited but busy with other projects, as well. The research has been pretty extensive, fascinating and terrifying.

Do you have any specific projects with ABC that you can share yet?

I do have a couple specific projects that I’m not at liberty to discuss yet, but I am excited about all of them and loving the gig so far.