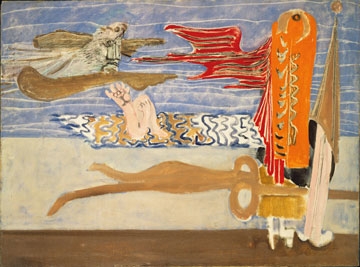 Actor Daniel Benzali began his quest to bring painter Mark Rothko to life onstage in 2004, about the same time Harold Schnitzer began his quest to bring the Portland-raised artist’s famed works back to the Portland Art Museum, where his first exhibit appeared in 1933-34.
Though Schnitzer died last April, it was his drive to showcase Rothko’s works that led to the broad-based cultural events that bring Rothko’s work and memory back to the city where he was raised.
“This is our major effort of the spring, thanks to the vision of Harold and Arlene Schnitzer pushing us to recognize this important member of our community,” says Bruce Guenther, the museum’s curator of modern and contemporary art.
Synchronicity and synergy are terms that repeatedly surfaced as I explored the lives and events that intertwined to bring a multisensory cultural experience to Portland.
The diverse range of visual, performance and musical experiences available this month are sure to sate Rothko fans and introduce neophytes to the life, work and legend of Portland’s most famous artist. The programs will appeal both to those who have already experienced the emotions elicited by meditating on the artist’s abstract expressionism and those who need a guide to understand why the large canvases of pure color are prized by museums and collectors worldwide. In fact, one painting topped $33.6 million at a Christie’s auction last year.
Rothko’s paintings are in such great demand that the Portland Art Museum “had to wait to get a slot in the international scene,” says Guenther.
Many Rothko exhibits only feature the artist’s “mature work,” which Guenther says can be found on posters in just about every college bookstore and museum gift shop across the country. But the Portland Art Museum exhibit will trace the evolution of Rothko’s work from an early Cezanne-style still life through his figurative American scenes in New York subways. It will encompass the ethereal world of surrealism, drawing on the notion of the subconscious until he “lets go of the lines and it becomes color – like squinting your eye into the sunset – you see color without edges.” (See Devotee for tips on viewing Rothko.)
One example of the synchronicity many people mentioned was the fortuitous move of stage and screen actor Daniel Benzali to Portland last fall, just in time to fill the role he had long sought. (See story titled “Red Road to Rothko”).
“It’s great for audiences to go to the museum and see the play,” says the actor. “It’s great for the theater and museum to do synergistic things.”
Chris Coleman, Portland Center Stage artistic director, said he was already aware of the Broadway hit when the museum asked if the theater would be interested in producing Red.
“We love collaborations, and this is one of the most exciting we’ve been able to do,” says Coleman. “Not only to present a play about a major figure in American art while his paintings are also on view, but because of the additional cool factor of Rothko’s Portland history. Our audiences are going to have a completely unique experience.”
Coleman added, “I had also heard from my friend Jerry Stern that Mark Rothko(witz) had grown up around the corner from him in South Portland – and thought – ‘what delicious synchronicity.’”
While the play continues through March 18 and the paintings will be on display till May 27, the opportunity to experience Rothko through music is a one-time event on March 10 at the Portland Art Museum.
“Word and sound, music and imagery” will come together in the Third Angle Ensemble’s performance of “Rothko’s Chapel,” which Guenther calls an exciting addition to the entire Rothko experience.
________________

DEVOTEE OR SKEPTIC, ROTHKO EXHIBIT CAN MOVE YOU

The actor who brings artist Mark Rothko to life on stage in Red has spent many hours experiencing the artist’s work as Rothko himself had said it should be.
“His work is always controversial because of its seeming simplicity,” says actor Daniel Benzali. “He wanted people to meditate with his paintings – and the more you stay with them from different directions and angles, the more there is to decipher and emotions to feel. A lot of people do feel it, some don’t. But if you do get into it, you would start to feel the same sort of emotion Rothko felt doing them.”
For Rothko devotees, the Portland Art Museum exhibit has several of the artist’s pure-color paintings to experience.
For those who don’t feel the emotional pull, curator Bruce Guenther has created a chronological flow of work to guide people toward understanding what Rothko sought to convey.
From his early figurative works, Rothko “entered the world of surrealism – the notion of subconscious,” says Guenther.
But when he releases form and line, his art “becomes a pure and formal exercise of response – he finds the beauty of colors,” says Guenther. In color, Rothko combined emotional and physical responses.
“Art is a mix of science and magic, of materials and ideas,” says Guenther. “He uses color as a way of stimulating eyes … of feelings associated with color.”
Guenther says he sees the influence of Judaism, in which God has no form, on Rothko’s mature work.
“Rothko approached the world as an intellectual, as someone who thought deeply about religion and life and painting,” says Guenther.
He hopes those who see the progression of Rothko’s work will take the time to let his mature works seep into their eyes and elicit emotions.
________________________________
DOROTHY REITER shared a photo her uncle Mark Rothko hugging her in 1968 on one of his last visits to Oregon. She said that in his later years, her uncle visited family in Oregon fairly regularly. While Rothko’s brother Albert also moved away from Oregon, his brother Maurice or Moise (Reiter’s father) and sister Sonia spent most of their lives in Portland. Reiter said that when she and her husband, Dr. Philip Reiter, went to New York not long before Rothko died, her uncle issued a rare invitation to visit his studio and see the works he was painting for the Rothko Chapel in Houston. She said both she and her husband found them dark and meditative and could only reply “interesting” when Rothko asked their opinion. And meditative is apparently just what the philanthropists who commissioned the works were seeking. Now, about 60,000 people a year visit the Rothko Chapel, whose mission is “to inspire people to action through art and contemplation.”

'Rothko Revisited' has no comments