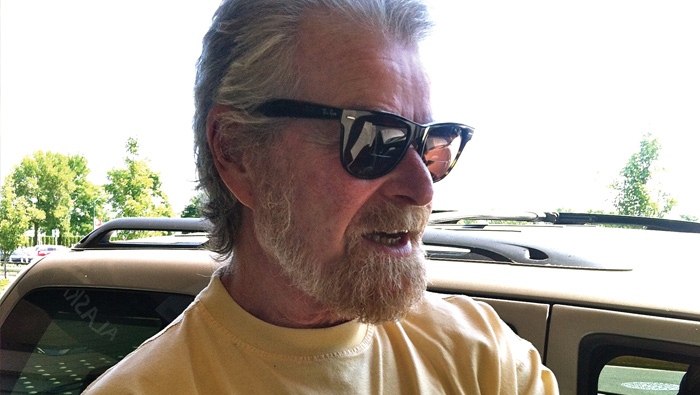 On Oct. 7, I traveled to Roseburg to attend the memorial service for Professor Larry Levine, who at 67 was the oldest person murdered during the Oct. 1 massacre at Umpqua Community College. I’d been invited by Larry’s sister, Joanne Press, in company with Eugene’s Or haGan Rabbi Jonathan Seidel, who presided over the event. Although Larry and his sister lived as secular Jews in separate states, at the end she felt a Jewish service was the right way to go.

Joanne learned I’d authored a book in 2008 entitled SCHOOL SHOOTINGS – What Every Parent and Educator Needs to Know to Protect Our Children. In the book, I tried to provide answers to two urgent questions: “Why do they do it?” and “How can we stop them?” For Larry and his UCC students, those answers would come too late, but every mass killing leads to renewed calls to “do something to prevent this happening again.” Maybe this time …?

But first there was a funeral to attend. UCC’s interim college president, Dr. Rita Cavin, could not begin speaking until her crying subsided – and she had another half dozen student funerals to attend that next week. Family members and friends spoke through unstoppable tears about the gentleness of this soft-spoken man who’d been cut down “at the pinnacle of his life,” as Joanne put it, referring to Larry’s joy in living in “his dream home” overlooking the North Umpqua River in nearby Glide, his love of fishing, gardening and other outdoor activities, and his happiness writing and teaching.

One of Larry’s poetic passages, included in the memorial pamphlet, described being hesitant to jump into that cold river on a hot summer day: “As I gazed into the depths, I saw my shadow and rays of light emanating around my silhouette. The light danced to the rhythm of the breeze on the water; it was all in one and magical, and that was what I dove into.”

But it was Rabbi Seidel who had the final word, and he spoke eloquently. He pointed out that Larry had died in the very classroom where he had inspired so many, and, “in a sense, became a martyr to teaching.”

On the way down to Roseburg, the rabbi and I had talked about the views of Douglas County Sheriff John Hanlin opposing any sort of gun controls, and we both disagreed with his stance. I feel the proliferation of battle-ready assault weapons is very much a part of the problem, and Rabbi Seidel saw gun-lovers as engaging in a modern form of idol worship, cherishing an object that allows them to decide life or death.

On the other hand, I applauded the sheriff’s decision never to utter the killer’s name, and so to deny this mass murderer the kind of recognition he sought in social media postings admiring how “nobodies” like himself could achieve global fame in a single day by committing atrocious acts of evil.

Rabbi Seidel pointed out that, in old Jewish tradition, the necessity to speak the name of an evil-doer must be accompanied by the exclamation “Yamach shemo!” (“May his name be blotted out from Heaven!”) while spitting on the ground, all in the same breath. That would certainly be impractical from a media standpoint, but it led me to another suggestion that I wish to seriously propose.

Because I believe fame has become the prime motivator among school shooters, I’m now convinced that mass media is morally obligated to change the way it reports these incidents. Instead of incessantly broadcasting the killer’s photo and name, refer to them by assigning each school shooter and mass murderer a number, and use that number exclusively in the media. Yes, their names and photos could be searched out by those who felt compelled to do so, but withholding information is not the point. The objective is to avoid granting the killers’ wish for sensationalistic publicity, for we have seen that doing so clearly inspires others to repeat and surpass these horrifying crimes.

Of course, setting this plan in motion would require an enormous amount of restraint and cooperation by media conglomerates bent on outdoing the competition, but it is far more plausible than expecting action on gun control or better funding for mental illness anytime soon. Numbering killers would cost nothing and potentially change everything.

Consider: The incident at UCC represents the 264th mass shooting (defined as involving four or more gunshot victims excluding the shooters) in the United States this year, as counted by the Gun Violence Archive. It was the 45th school shooting in America in 2015, according to gun safety coalition Everytown. Thus, the UCC gunman could be referred to as Shooter 264-45-15. The Northern Arizona University murderer on Oct. 9 would be Shooter 265-46-15, but the Texas Southern University killer that same day would be Shooter TX-47-15, substituting state initials for the first number because just two were shot in that incident (one dead, one wounded). The coding is not that complicated.

Such a numbering system would serve to deny the shooter his quest for fame, and simultaneously remind the public of the human cost we are paying to preserve America’s love affair with guns and lack of treatment for the dangerously mentally ill. Does any would-be mass killer really want to be remembered only as Shooter Number 266-48-15?

Instead, we should remember kind and innocent victims like Larry Levine, who inspired students, teaching about “the power of awe to transform” people. It’s sadly ironic that concerning his own life in Oregon, Larry recently observed, “Being here only gets better, the more here I become.”