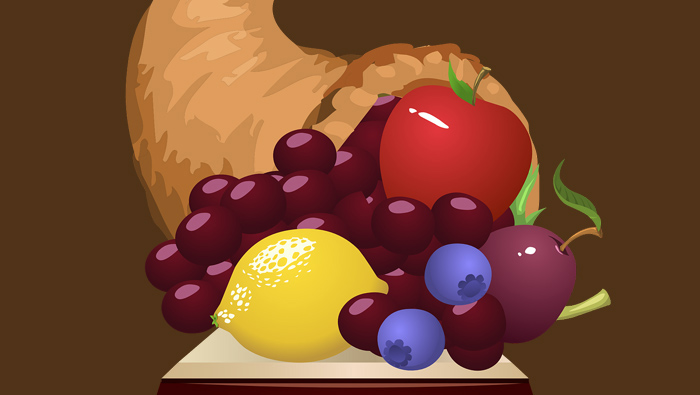 Many Americans have lost touch with the origins of Thanksgiving. When you ask someone to explain the reason for the holiday, they often link the holiday to American ideals like democracy, pluralism and freedom of religion. Since most Americans live their lives far removed from agriculture, few remember that Thanksgiving grew out of the same impetus that people worldwide for millennia have felt in the fall: a feeling of thanks at the conclusion of the harvest season.

Though we do not celebrate Thanksgiving in Israel, our move here reconnected us with the bounty of the land for which the pilgrims were thankful.

In immigrating to Israel, my wife and I did not realize that we would be bringing our family closer to nature. After all, we were not moving to a kibbutz or a similar type of agricultural community – we moved to what is essentially a suburb of Jerusalem. And yet the following trees are in my backyard: lemon, apple, pear, grapefruit, olive, shesek (loquat) and kumquat. For those so inclined, and my sons Ezra and Elie are so inclined, fall brings opportunities to participate in the harvest of many different kinds of fruit. This year, in the span of a few weeks, Ezra took part in the harvesting of three of the seven biblical “species.”

The Bible speaks of the following as being special products of Israel: “a land of wheat and barley, of (grape) vines, figs, and pomegranates, a land of olive trees and (date) honey” (Deut. 8.8). The Hebrew language lovingly marks the specialness of these fruits by assigning unique verbs for their harvest. Whereas in English, you go out to “pick” figs, olives and dates, in Hebrew you do aryah, maysik and gedid, respectively.

In late August, Ezra and I drove to a park just 20 minutes from our home and “aryah’ed” about 10 kilos (22 pounds) of figs (which I cooked up into some excellent jelly). In mid-October, Ezra went with a friend to the same park and to a nearby neighborhood in Jerusalem and “maysik’ed” several hundred pounds of olives (which he took to a small commercial olive press and turned into 50 liters of olive oil), and in late October, Ezra worked “gedid’ing” for a week and a half on a date farm in a small Jewish settlement near the Dead Sea.

I volunteered and joined Ezra for several days of gedid. In return, date farmers Meirav and Doron gave me two jars of date honey (known as silan), several bottles of date beer, one kilo of Grade B dates (which I turned into excellent date cake) and four kilos of premium Medjool dates (which are in great demand in Europe; sometimes when a date fell to the ground we would jokingly say, with good reason, “pick up that Euro”). Though Ezra grumbled a bit at the low hourly rate (which was minimum wage, a bit under $7 per hour), I loved the experience. You and your fellow workers stand on a special gedid machine that lifts you up to the dates, you shake each cluster of dates and they drop into the surrounding netting, then you release the opening of the netting, shake the dates into a pail and pour them into crates. Cumulatively, it’s hard work, but it’s also pretty peaceful 10 feet above the ground among the dates. And if you get hungry, you just pop a gorgeous Medjool into your mouth.

I’ll be thinking about this year’s aryah, maysik and gedid on Thursday, Nov. 23; this won’t be hard because I will still be enjoying the fruits of these harvests. It might not be Thanksgiving here, but I will be feeling thankful for the bounty of this land. The fact that I and my family in a small way are able to be part of the harvest makes me even more thankful.