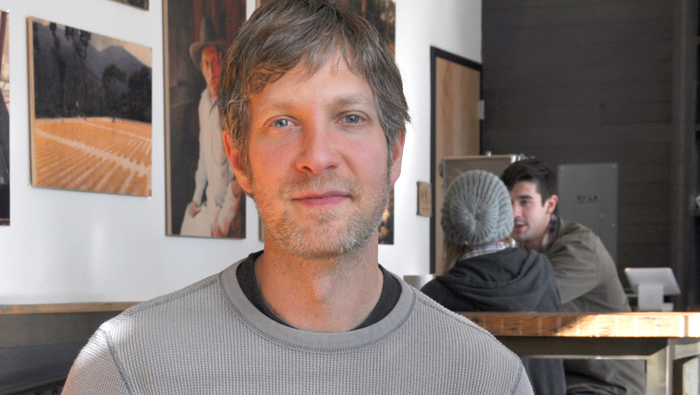 Although he was bored with his first bit part in his father’s “Beverly Hills, 90210” TV show, Randy Spelling decided in high school that he wanted to join the family business – entertainment.

Randy is the son of Aaron Spelling, television’s most prolific producer, and Candy Spelling.  He is the brother of actress Tori Spelling. Randy says he didn’t want to disappoint his family, and he has a great appreciation for the entertainment industry, but adds “It never was for me.”

He attributes the addictions that nearly killed him the year his father died (2006) to “not being true to myself.”

Now a 37-year-old husband, father, life coach and author living in Portland, he describes life as happy, fulfilling and full of good food. But it was an often gilded, occasionally tortured road he followed from Spelling Manor in Los Angeles to Southeast Portland.

“Any house that has a name is usually on the large side,” Randy says of the mansion where he spent his adolescence. “It is its own entity.” The family lived north of Sunset Boulevard in Los Angeles and then moved three blocks to take up residence in Spelling Manor after construction was completed on the 56,500-square-foot mansion when Randy was 12.

“It was large,” he says, noting it had an arcade and bowling alley. “I had a lot of fun there. My house was the place where my friends came.”

Randy says his father’s parents, who immigrated from Poland and Russia, “were as Jewish as they come.” His mother also grew up in a Jewish home, though she longed to celebrate Christmas, so Randy was exposed to both Jewish and mainstream holidays early in life. He lit the Hanukkah candles and said the blessings. The family went to temple on High Holidays and celebrated Passover. His parents gave him the choice of whether to study and become a bar mitzvah. “Eighty percent of my friends were Jewish, so I was going to bar and bat mitzvahs all the time,” he says. “Because they gave me a choice, the choice was ‘no.’ ”

A year after moving to Spelling Manor, Randy says his dad and sister thought it would be fun for him to try acting. “So he gave me a tiny part the summer of eighth grade. I wanted to play with my friends instead of waiting days for one line; there were lots of takes. I couldn’t wait to be done.”

About three years later, Randy had taken some acting classes in high school and decided he did want to pursue the family business. So during a family dinner in Las Vegas, he asked his parents if he could work with an acting coach. He began working with Kathryn Daley, Tori’s childhood coach. It was a momentous choice that turned out to have far-reaching repercussions.

Kathryn was into meditation and metaphysical teachings. In addition to studying acting techniques, Randy began to meditate daily and started “down the road of self-discovery.” He became an avid reader of self-help, new age and religious books including Kabbalah.

“In retrospect, if I didn’t go so far in that direction and have those experiences of connection, I probably would have died,” he says. “When I was in a dark place, I knew how light life could be, and I wanted to go back there.”

The acting payoff was more immediate. He landed a role on “Malibu Shores,” followed by a return to 90210 when a recurring role came up for Steve’s little brother. He also appeared in “Charmed” before starring on “Sunset Beach” for four seasons. After taking a break to run an independent recording company for a couple of years beginning in 2000, he returned to acting. He appeared in “a handful of movies” before his agent convinced him he needed to do a reality show to propel his career.

The show was “Sons of Hollywood.” He starred with Sean Stewart (son of British rocker Rod Stewart) and their childhood friend and agent, David Weintraub.

“I never wanted to do a reality show,” he says. “Shooting the show was a horrible experience. My father passed away while we were shooting. And I was struggling with an addiction. There were four times when I could have or should have died.”
Randy says he was addicted “to anything that would make me feel different – alcohol, drugs.”

When his father passed away in 2006, Randy says he realized he, too, would die “unless something changed.”

“Coupled with a feeling I had inside that there was so much more to life, a deeper spiritual connection I was in tune with before this madness,” he began to find his way out.

He attributes his addiction to “not embracing who I was, struggling to find my place in the world.”

In the world he grew up in, he didn’t know what else he could do besides join the entertainment industry.

“Finding my own voice … took a little longer, but I found it,” he says.

His first discovery was life coaching. Knowing he wanted to do something different, in 2007 he enrolled in a life-coaching course and “it felt fitting.” So he signed up for the two-year Coach U at a time when most people hadn’t heard of life coaching and began his new career.

In 2009 two more changes were on the horizon. Sitting in a doctor’s waiting room, he picked up a magazine and began reading an article about Portland. “I got an excited feeling in my stomach and thought ‘that’s strange,’ ” he says.

So he and his girlfriend, Leah, went to explore Portland the week before New Year’s. He proposed to Leah during the visit. They moved to Portland in February 2010 and got married in September. He describes the outdoor wedding on a Hillsboro farm as “spiritual, nature-based,” then adds “We did have a chuppah.”

They enjoy being in nature, hiking and visiting farmers’ markets.

I love the farm-to-table restaurants,” he says. “Portland really showcases what is grown around here. I really like to eat.”

The couple has two daughters, Sage, 4, and Lotus, 2, so most family activities revolve around seasons and festivals. This Passover he says Lotus latched onto the traditional song Dayenu and for weeks kept singing “day, day enu.”

He says his mom loves being a grandma. “I’m close to Mom; I visit her and she visits us.” He also stays close to his sister Tori, who now has four children ages 3 to 8. Given Tori’s and his own busy schedules, he says they don’t see each other as often as he would like, but they keep in touch with photos and texts.

Meanwhile, Randy has built a thriving life-coaching business called Being in Flow (Randyspelling.com). His is an Associate Certified Coach of the International Coach Federation. Though based in Portland, he says he has clients from around the world with about 70% of his business via Skype or on the telephone. He is also a motivational speaker and leads workshops and mastermind groups.

While acting professionally wasn’t for him, he says it did equip him with skills he uses in his presentations and working individually with clients.

“When I’m giving a talk in front of hundreds of people, I can sit in a chair or have more fun with it,” he says. “I act things out so people can see themselves in me and then change it. … Sometimes it’s so hard to see yourself; if we see ourselves in someone else, it can be an ‘aha moment.’ It creates a visual of what the pattern is.”

After years of life coaching, Randy says, “I saw patterns in people – the same wants and needs no matter what country or age. The stories varied, but the underlying wants and needs are the same. We are all inhibited by our own limitations.”

So earlier this year he wrote his first book, Unlimiting You: Step Out of Your Past and Into Your Purpose. He calls it a guidebook to living a better life. As he does in his coaching and speaking engagements, he helps people visualize themselves by sharing stories from his own life and those of clients and friends. The stories “illustrate the biggest themes in the book. The point is to make it digestible and easy to read.”

The 286-page book from In Flow Books is available from unlimitingyou.com and on Amazon in paperback and for Kindle.

His business is also expanding this year. In late November he instituted online memberships on his website.

“The most exciting thing about membership is personal coaching can be expensive,” says Randy. “For a small monthly fee … people can work on weekly challenges at home without paying the same rates.”

Between his family and running a business, Randy says life is busy, but now he is being true to himself, which for him means anything that is authentic and grounded in truth.

“I can get stressed and overwhelmed,” he says. But he realizes that when he is reacting to things happening around him, he is not being his true self at that moment. “I am an effect of happenings.”

At that time he says it helps to take a deep breath, go for a walk or simply ask himself,
“Is this my true self?”

“That simple question brings a slight shift that makes an expansive difference,” says Randy. “If you look at something slightly differently, one tiny angle changes everything.”
For Randy, the changes have all been good.

'Randy Spelling: from glittery Hollywood to fulfilling Portland' have 2 comments