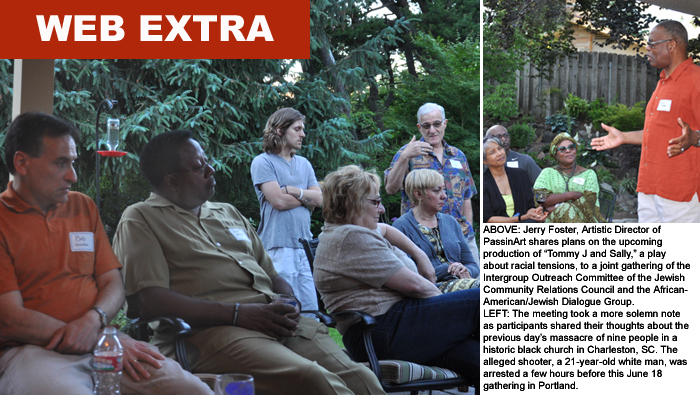 On June 18 joint gathering of the Intergroup Outreach Committee of the Jewish Community Relations Council and the African-American/Jewish Dialogue Group went far beyond its original intent.

Originally planned as a social gathering with an informal presentation about a special collaborative theater project, the gathering evolved into an opportunity to share feelings and prayers in the wake of a white gunman’s massacre of nine people in a historic black church in Charleston, SC, the day before.

The planned part of the evening featured Jerry Foster and Kim Moreland from PassinArt: A Theatre Company. The two provided details on the play, playwright and director for the October performances of “Tommy J & Sally,” a two-person play that confronts racial tensions and personal relationships in a powerful way. The JCRC and the dialogue group also discussed proposed talk backs.

Following dinner and presentation at the home of Joanne Van Ness Menashe and Joe Menashe, the 20 some participants shared their sadness, frustration, hopes and fears with each other. Several people arrived late after attending a vigil at Portland’s Bethel AME Church.

Initially, Joanne said she thought people would not want to attend the event after the shooting, but “so many of you have expressed it is comforting to know that we can come together as one community in sorrow and work for a better world together. As Kathy (one of the participants) said earlier ‘not only will I be there; but I NEED to be there (tonight of all nights) among friends and others during these horrific times of unpredictable hate and madness in our country and around the world. It will be good to be among friends – so much ‘comes at us’ which we are expected to somehow bear.’”

\• “I’m coming from the vigil at our church. …Our congregation is mostly people in their 80s and 90s – for them to have to relive the memories they grew up with – it just hurts.”

In the wake of the shooting the JCRC issued the following statement:

The Jewish Community Relations Council (JCRC) of the Jewish Federation of Greater Portland expresses its outrage and deep sadness at the news of the horrific massacre last night at Emanuel African Methodist Episcopal Church in Charleston, South Carolina. We stand today with the people of Charleston, the city’s faith community, and the congregants of the Emanuel AME Church as they confront this senseless act – the hateful shooting of nine people in a holy sanctuary.

Hate crimes attack both individual victims and entire communities. They are meant to isolate and terrorize. In contrast, we stand for an inclusive and pluralistic community, one that cherishes life and recognizes that every person is created in the divine image.
This horrible act has occurred at a time when ugly currents of racism still run deep in our society. We must address them directly and justly. We applaud the local and state authorities’ vigorous efforts to capture the suspected perpetrator, and we hope that all appropriate resources are marshaled in a unified pursuit of justice. We must clearly and unequivocally demonstrate that hate violence has no place in our society.

We extend our heartfelt prayers to the families of Rev. Clementa Pinckney and of all the other victims. May their memories be for a blessing.