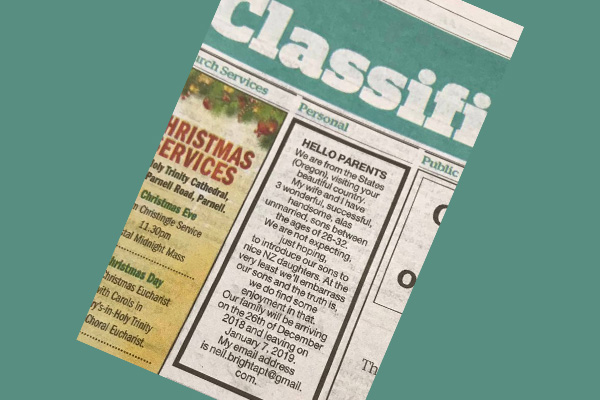 Photo: The ad that made the Szyfbergs celebrities in New Zealand. 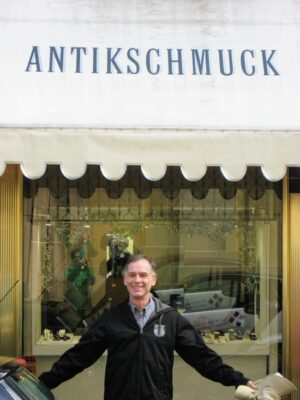 After two lighthearted conversations with Neil Szyfberg of Eugene, Oregon, I can tell you one thing, Jewish mothers don’t have anything over this Jewish father. In fact, Neil’s wife, Mindy – who was a Hebrew school teacher at  Temple Beth Israel in Eugene for 20 years – is the first to say that he has more stereotypical Jewish mother traits than she does.

Neil Szyfberg is nothing if not caring and care he does about his three adult sons, Benjamin, Jeremy and Matthew.

Almost two years ago, Neil and Mindy went on a family trip to New Zealand with their sons. What his three sons did not know until ”it was too late” was that Neil, a business owner in Eugene, had placed an ad in the local New Zealand paper ahead of their arrival:

“We are from the States (Oregon), visiting your beautiful country. My wife and I have three wonderful, successful, handsome (alas unmarried) sons between the ages of 26 and 32,” the ad read. “We are not expecting, just hoping, to introduce our sons to nice NZ daughters. At the very least, we’ll embarrass our sons, and the truth is, we do find some enjoyment in that.”

Surprisingly, he received more than 200 responses. Fortunately, his sons understood their dad’s motivation and humor, and after the initial shock, they found it rather funny.  The ad created such a buzz in the New Zealand media that they enjoyed a kind of celebrity status while they were there. All three sons went on some wonderful dates during that time, but alas, no lasting relationships. 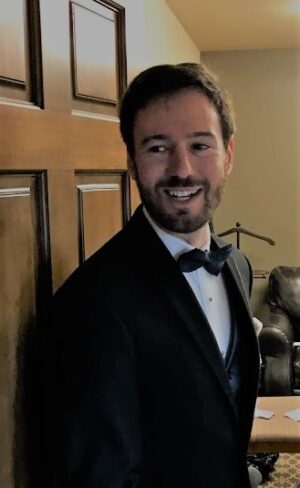 Fast forward to today, and although the two youngest sons who live in Seattle are in relationships, Matthew, 33 (the oldest), who lives in Portland, is single. And though he would like to date a Jewish woman, he claims that he has not successfully found many in Portland.

Both Neil and Mindy would like Matthew to find a ”nice Jewish girl” and are convinced she is out there. Neil also has a more serious reason for wanting his sons to marry someone Jewish. His parents met in the Warsaw Ghetto, and during the uprising, they miraculously escaped together. They hid out in the forests and eventually were sent to two different displaced persons (DPs) camps. In 1949, they were able to begin a new life in the United States.

Partially because of what his parents went through and what many Jews have gone through, Neil and Mindy feel it is especially important for their sons to marry Jewish women. On the other hand, as Neil has said throughout our conversations, like all good Jewish mothers….fathers, would say,’ ‘I just want them to be happy.”

So citizens of Portland, let’s help Neil find his son a wife…or at least a promising date.