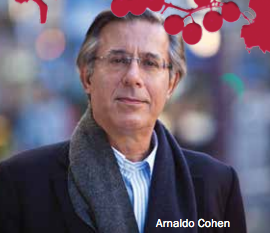 “My favorite thing about Jewish food is eating it and then not eating it for awhile,” declares pianist Arnaldo Cohen, the newly appointed artistic director of Portland Piano International. An active performer, Cohen is often on the road for months at a time and receives many invitations to dinners in restaurants or private homes, which has allowed him to sample cuisines from all over the world. The Brazilian-born Cohen, now an American citizen, had a head start on accustoming himself to a variety of different cuisines thanks to his rich Ashkenazi-Sephardi upbringing in Rio de Janeiro as the son of a Ukrainian mother and Persian father.
“I grew up eating a mixture of Ashkenazi and Sephardi dishes,” Cohen explains. “I don’t know if there’s a specifically Jewish Sephardi way to cook; it’s basically Arabic.” A typical Shabbat dinner would begin with a Sephardi consommé made from chicken, or the family might have chickpeas in a soup. “My grandmother would make kibbeh, known as the national dish of Lebanon. It’s basically meat croquettes with bulgur and onions. My mother says you have to have a special manual talent for them; if you don’t make them well they become too thick.” In place of kibbeh Cohen’s family would have either chicken or fish, and the chicken would always be boiled with some potatoes, a quintessentially Ashkenazic method of preparation. In addition to the main course, the table would be loaded with green salads and lots of fresh fruits and vegetables.
For Saturday meals Cohen’s mother would make kreplach – “like ravioli in a Ukrainian way with cottage cheese inside,” he says. The family would also eat fluden, an Ashkenazi dessert pastry filled with bits of dried fruits. Other dishes that made regular appearances on the Cohen family dinner table werefarfalle, bow-tie pasta with kasha varnishkes, and herring in cream sauce, a favorite of Cohen’s father. Cohen’s family also adapted Brazilian dishes, many of which contained pork. “We’d eat a lot of feijoada, often described as the national dish of Brazil,” Cohen remembers. “Brazilian feijoada has pork, so my mother would make the recipe without the pork using other sorts of meats like pastrami.”
Cohen’s favorite childhood dessert was a crème caramel made out of condensed milk. “It’s very rich, like flan but thicker and better. It’s more of a condensed milk pudding.” It’s often difficult for Cohen to avoid eating heavy food, especially when he is invited to a private home for a meal, so he eats light on the road. “I try to have a lot of salads, chicken or salmon.” In his previous visits to Portland to perform with the Oregon Symphony, Cohen became a champion of Oregon wines. “Of course red wine is always the right partner for me for any food,” he says. “Wine is important; don’t start eating until you’ve had the first glass. A good pinot makes any food wonderful.”
Cohen is looking forward to sampling new eateries in Portland now that he’ll be here more often. “The Heathmanis always my default restaurant; they have some special appetizers, very small, which are fantastic,” he says. “I’m also a fan of the creative meals you can find at a place like Higgins. I’m always looking for a restaurant that can serve a good vitello tonnato. It’s one of my favorite Northern Italian dishes. The veal is cut very thin with a tuna sauce that has the same sort of texture as hummus.”
Adaptability is essential for Cohen because he eats out so often. “My attitude is put it on the table and I’ll eat it,” Cohen declares. “Fortunately I have a strong digestion; I can eat pretty much anything. Since I don’t cook myself, I’m always very curious to try new things. I like surprises.”
Portland freelance writer Elizabeth Schwartz is a founding member of Portland Tuv Ha’aretz (“good for the earth”) and teaches the Melton spotlight course “Kashrut and Beyond: Jews and the Ethics of Food.”