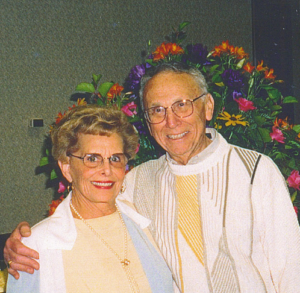 Kalman, known as Ken to his Portland friends and relatives, is the son of Ray and Dorothy Packouz. Ray, 97, and Dorothy, 98, are veterans of World War II and recently celebrated their 72nd anniversary at their home in the Courtyard Village in Raleigh Hills. courtyardvillage.com/ray-dorothy-packouz/

Kalman, known as Ken to his Portland friends and relatives, is the son of Ray and Dorothy Packouz. Ray, 97, and Dorothy, 98, are veterans of World War II and recently celebrated their 72nd anniversary at their home in the Courtyard Village in Raleigh Hills.

Rabbi Packouz, 68, grew up as a Reform Jew in Portland’s Temple Beth Israel before becoming an Orthodox rabbi. After graduating from the University of Washington in 1972, he sampled kibbutz life in Israel before becoming a student of Rabbi Noah Weinber. He cofounded Aish HaTorah, now a noted outreach organization in Jerusalem. In 1979 he cofounded the first American branch of Aish HaTorah in St. Louis. He returned to Israel as CEO of Aish HaTorah and served in the IDF.

Since 1992 he has been educating people around the world with insights into life, personal growth and Torah. What started as a local fax to 50 people quickly expanded nationally and internationally to more than 100,000 subscribers. Rabbi Packouz was either one of the first internet bloggers – or a blogger before bloggers existed.

The rabbi has been on the cutting edge of technology since the early ’80s when he started one of the first Jewish computer dating services as director of the Aish HaTorah in St. Louis. Local news coverage touted the service as “Yenta Becomes Honeywell!” and the Today Show featured this innovative program to promote Jewish marriages. Rabbi Packouz said, “My fascination with computers presented an unparalleled opportunity to help Jews meet and marry other Jews.”

His fascination with the internet led Rabbi Packouz to another first – placing a camera on the Aish HaTorah building overlooking the Western Wall, enabling people around the planet to see the hustle and bustle of Jews gathering and praying at the Wall. The website (TheWall.org) allows anyone to send a prayer to be placed in the Wall. Every day notes arrive from people of all religions from around the world and are printed out and placed in the Wall. 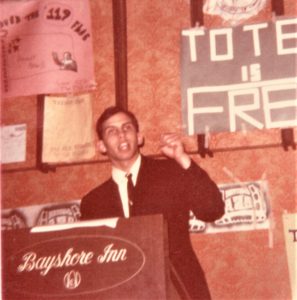 As a BBYO president, the future Rabbi Kalman spoke at a regional conference.

During his youth in Portland, Rabbi Packouz became a bar mitzvah at Congregation Beth Israel and was active in BBYO, serving as regional and district president. He received Beth Israel’s coveted John F. Kennedy award as the top graduating senior from the congregation’s Sunday School. Rabbi Emanuel Rose, rabbi emeritus of Beth Israel, once asked his former student why he transitioned from his Reform background to an Orthodox orientation. Rabbi Packouz replied, “I was taught in Sunday School that Reform Judaism is about doing what one finds meaningful in Judaism. I find all of the Torah and the mitzvos meaningful. I don’t look upon myself as an Orthodox Jew; I look upon myself as a fully Torah-observant Jew. Perhaps one could say I am an ultimately fulfilled Reform Jew!”

The Shabbat Shalom Weekly started in 1992, first as the Shabbat Shalom Fax being sent to 50 people. A few months later it became one of the first Torah emails on the internet. It now goes out to 20,000 people by fax and 80,000 by email. The Shabbat Shalom contains five elements: insights into personal growth and life or an upcoming holiday; a quick overview of the Torah portion of the week; a short d’var Torah, a lesson for life learned from a verse in the weekly Torah portion; candle-lighting times around the world; and a quote of the week. (Some people subscribe just for the quote; many people read it first!)

The Shabbat Shalom ends up in some unexpected and far-flung places. Visitors to India and Singapore were surprised to find copies of the Shabbat Shalom on their seats in the synagogue on Shabbat. A Jewish woman was receiving the fax edition in a Catholic school where she worked. When asked to have it stopped, she appealed to the head priest. After reading a copy he responded, “You may continue to have it faxed to you on one condition – that I receive a copy each week!”

Over the years it has changed people’s lives and brought them closer to the Torah, the Jewish people and Israel.

In an era when few people say thank you, the rabbi frequently receives messages about his weekly missive: “This week’s edition meant a lot. It helped me. It’s just what I needed to get through the day.” “My life has really changed since I started reading your articles.” “I always marvel at how you fit so much insight into short, easy-to-read emails.” “Your articles are always so well-written and meaningful.” “It not only inspires me, it teaches me so much about our beautiful religion.” “You are at our Shabbos table every week!”

After 27 years of sending the Shabbat Shalom Weekly in English, Rabbi Packouz has added Hebrew and Spanish versions of SSW. One can view the English, Hebrew and Spanish current editions and/or subscribe to receive the emails at ShabbatShalom.org. A Portuguese translation is also available by emailing meor18@terra.com.br.

Rabbi Packouz credits his parents for his many accomplishments for the Jewish people. “They instilled the values – the importance of striving for a meaningful life, strengthening the Jewish people and Israel, and making this a better world!”

Jonathan Weiss is a former journalist.  He began his career in newspapers and radio before transitioning to television news for 12 years. Most recently he was a supervising producer with CBS in New York.