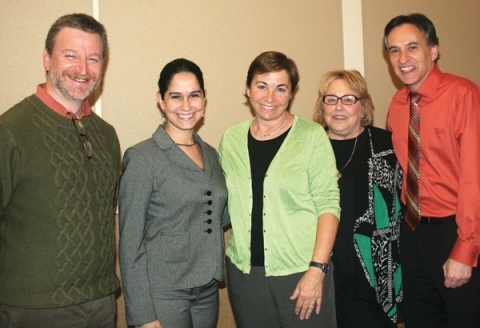 Britons and Americans sometimes joke that they speak the same language but do not understand each other’s words. Indeed, while people from around the world might experience the same event, perceptions can differ so greatly that they scarcely believe they breathe the same air.

Clearly, nonstop media messaging, culture, religion and the environment create the framework for how we understand issues. On Dec. 10 Colonel Miri Eisin spoke at the Mittleman Jewish Community Center about how this influences perceptions of Israel. Hosted by the Community Relations Committee of the Jewish Federation of Greater Portland, the free talk drew about 120 people.

Born in California, Miri grew up in Israel and served in the Israeli intelligence during her 20-year military career. She has also worked as Israeli Prime Minister Ehud Olmert’s international media advisor and is a senior fellow at the Center for International Communication at Bar-Ilan University.

According to Miri, frameworks for understanding Israel fall into three main categories: Arab, Israeli and Western European. While leaning toward Western Europe, the United States is sometimes closer to how Israelis see themselves.

Perhaps conflicting views begin with the question – what is a Jew? Are we a religion only, or are we also a people and nation? This, Miri says, forms the basic gap between Muslims’ and Israelis’ views of the Jewish state. Additionally, Arab countries focus on the Palestinian tragedy and see Israel as an occupying army.

While Israelis and Western Europeans once shared the view of Israel being a weak underdog surrounded by enemies, the 1967 war began a reversal. Today, Western European media portray Israel as the “Goliath,” a powerful, monotone, one-dimensional aggressor that builds not a security barrier but an apartheid wall. The occupation causes the violence; end the occupation and the killing will end. Palestinians are victims, and therefore not accountable or responsible. And Western European’s post-World War II mindset, Miri says, includes a deep suspicion of nationalism and the effectiveness of military solutions.

Israelis, on the other hand, continue to view themselves as a small nation surrounded by enemies. They are nationalistic. Most people are drafted, and many see military solutions as one possibility. Unlike Europe, Israel is not post-Holocaust. Some say that what happened when Jews did not have their own county is forever imbued in collective memory. Israelis do not believe their security issues begin and end with the occupation, but extend to the entire region including Iran, Iraq, the Islamic State and the chaos in Syria, to name a few. Perhaps most of all, Israelis do not define themselves by one conflict. While the international community may see the upcoming Israeli elections as a referendum on the Palestinian issue, the Israeli voters’ broader context includes the economy, religion versus state and other domestic issues.

Miri hopes that understanding different frames of reference will increase communication and move the international community beyond an often blinkered perception. She worries that the Israeli/Palestinian conflict has become so divisive that it makes any discussion about Israel almost taboo.

“Israel in the media is one-dimensional and shown only through the Palestinian conflict,” she says. “Dialogue can change when you understand the different frameworks.”