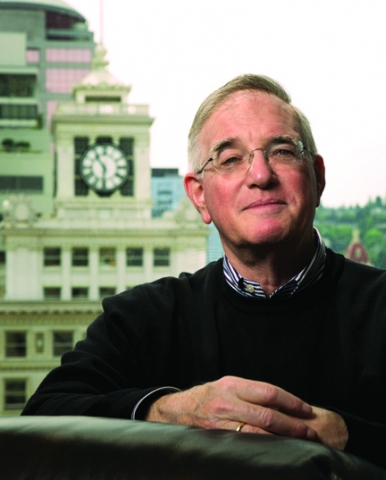 After hitting the New York Times best seller list with all 16 of his novels, Portland author and attorney Phillip Margolin is eager to publish the historical novel he has worked on for 30 years.

“It’s the best thing I’ve ever written,” says Margolin of the yet-to-be named novel due to be published by HarperCollins in 2014.

“Someone who likes my legal thrillers will like this,” he says as he leans back in his office chair with his feet on the desk and the covers of his novels displayed on the wall behind him. “It has a murder trial and courtroom scenes, action and a surprise ending. But there is another layer of quality writing and serious themes.”

Reviewers have praised all of Margolin’s novels for their page-turning plots and surprise endings.

During the launch of his latest novel, Capitol Murder, at Annie Bloom’s Bookstore in Multnomah Village, he said the goal of his legal thrillers is entertainment.

“I’m fabulous at plotting, but no one picks up a Phillip Margolin for literary quality,” he said during a later interview at his office. He added that reviewers often have criticized his lack of character development.

But he has spent 30 years, off and on, living with the characters and researching the culture and real Oregon slavery case at the center of his upcoming historical novel. He says early readers all agree the writing is strong and the characters well developed. In addition, the novel has two very serious themes – grief and the impact of slavery on an individual.

He says this novel is as similar to, and as different from, his previous novels as To Kill a Mockingbird is from the Perry Mason mysteries he loved to read as a child.

“Usually I have no emotional involvement in anything I write, but I’m not objective about this book,” he says. “I just finished The Ottoman Scepter (another legal thriller) and after that (the publisher) will get to this. … I’m very excited.”

He notes this is “a side project” for HarperCollins, which has published his last 10 best sellers and has slated The Ottoman Scepter for publication in 2013. “It’s different from what I usually do.”

But what he usually does has certainly attracted a wide readership base.

Ever since Gone But Not Forgotten hit the NYT best seller list in 1993, Margolin has been turning out about one thriller a year. In hardcover, Gone hit number 12, but in paperback it rose to number 3 on the list behind Forrest Gump and a Tom Clancy novel. Gone sold more than a million copies and was picked up by more than 25 foreign publishers. It stayed on the best seller list for nine weeks. In 2004 Gone was made into a mini-series starring Brooke Shields.

Two novels he wrote a dozen years earlier (Heartstone, 1978, and The Last Innocent Man, 1981) became NYT best sellers when they were reissued after Gone’s success. During their first release, Heartstone was nominated for an Edgar for best original paperback mystery of 1978 by the Mystery Writers of America, and Innocent Man was made into an HBO movie. Margolin also won the Spotted Owl Award for the Best Northwest Mystery for Executive Privilege and has been nominated for two Oregon Book Awards. Several books have been Book of the Month Club selections.

From 1972 to 1996, Margolin was in private practice specializing in criminal defense. He argued at the U.S. Supreme Court, represented about 30 people charged with homicide, including several who faced the death penalty, and was the first Oregon attorney to use the Battered Women’s Syndrome to defend a woman accused of murdering her husband.

One might wonder if some of his characters’ views reflect his own. He cautions people not to confuse his characters with himself. But he says that views expressed by at least two characters on the importance of providing the best defense possible to those accused of truly heinous crimes do reflect his own views.

He explains that he gained an appreciation for the American legal system when he was a Peace Corps volunteer in a west African dictatorship.

“It’s very important to give the worst person a fair trial, because if that type of person can get a fair trial, then when average citizens are arrested they feel they can get a fair shake,” he says. “When citizens lose faith in the system, that’s when you have revolution. So you work your butt off for bad people. Maybe you’d pull the switch yourself, but you make sure if they are convicted, it is by the system following the rules. It’s worse for the government to break laws to get a conviction than for an individual to do a heinous act.”

“Governments can be oppressive, so they should have the burden of proving to 12 people that a person did what they are accused of,” he says. “It’s better that nine guilty people go free than one innocent person goes to prison.”

“I loved being a lawyer,” he says. “Writing is fun. Law is fun too, but law is serious. I did 12 death penalty cases. If I messed up, someone died (none of his clients were sentenced to death). … There’s a medicinal value to a good book, but it’s not like saving a human being from life in prison. It puts writing in perspective.”

Of the Jewish adage that saving a life is like saving the world entire, he says, “If that’s true, I’ve saved the world a number of times.”

Two of his characters are Jewish attorneys Amanda Jaffe and her dad, who are featured in four of his novels.

Margolin describes himself as a “gastronomical Jew” who misses the chopped liver and pastrami that were so readily available where he grew up in New York.

He said his family always celebrates Passover with a seder, and, though they race through it “at the speed of light,” they always include The Four Questions and the hunt for the afikomen for his two grandchildren. He says he used to join his wife, Doreen, for High Holiday services at Congregation Beth Israel, but has not gone since her sudden death from an aggressive cancer in January 2007.

“When Doreen died, I did find the rituals comforting,” he notes. “Rabbi Rose and Cantor Schiff were very helpful.”

Even more helpful was the support of his two adult children Daniel and Ami. Daniel is a lawyer specializing in family law in Portland. Ami is now the executive director of the North Clackamas Education Foundation.

“I would have had a hard time after Doreen died without the kids’ support,” he says. “Doreen was the single most amazing human being I ever met … beautiful, brilliant and a nice person. In the 38 years we were married, she never did anything bad.”

When she died, the Oregon Legislature passed a resolution honoring her commitment to the state’s community colleges and her work as chair of the Portland Community College Board. In addition, a section of the library at Lewis & Clark School of Law, where she graduated near the top of her class, is dedicated to her.

“I couldn’t write while she was sick. I canceled all my speaking engagements,” he says. “When Doreen died, Ami stayed with me (even though she had just married Andy) instead of being a newlywed.”

When he started to write again, he says it was like therapy.

The book he began to write was Executive Privilege, the first of what became a trilogy with one book for each branch of government – executive, judicial and legislative. Book two was Supreme Justice and finally came Capitol Murder, which was released in April of this year.

“The ending is the most important part of a book; it’s what the reader takes away,” he says. “I won’t write a word unless I know who the bad guy is and how he’s going to get caught.” So even though he considered making the president of the United States a suspect in a serial murder case in 1995, he didn’t use the plot because he didn’t know the ending.

So 10 years later, when the ending “hit me like lightning,” he was ready to start writing. His wife’s illness and death intervened, but when he resumed writing he poured himself into it.

And now he’s eagerly awaiting the publication of the book he expects to surpass both.