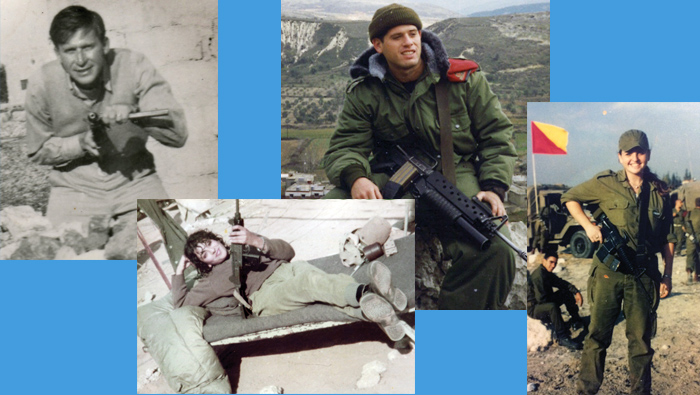 On Nov. 29, 1947, Joshua Stampfer, then a young rabbinic student in Jerusalem, awoke to the news that the United Nations, the night before, had approved the creation of a Jewish state.

Soon after the UN announcement, he joined the Haganah, the underground Jewish defense army that, after statehood, became the Israel Defense Forces. His wife, Goldie, assisted the Haganah in communications work.

“These were among the most exciting and fulfilling days of my life,” says Rabbi Stampfer, who turns 95 this December. “To be participating in the creation of the State of Israel was the fulfillment of a lifelong dream.”

After training in various camps, he was stationed in the Jerusalem suburbs, often doing night patrols along the boundary areas with Arab villages. One night, he and 35 members of his unit were to be sent to Gush Etzion to aid four kibbutzim under Arab attack. He was pulled out of the group at the last minute; none of the 35 survived the mission.

With the impending birth of their first child, the Stampfers returned to the United States so Goldie could receive needed medical care.

Once an advocate for a two-state solution to the Israeli-Arab conflict, Rabbi Stampfer today says it’s no longer possible because of other developments in the Middle East. Still, he hopes. “My only dream is that we should have a strong and a truly democratic Israel, one that enables every community in the land to thrive and to be respected.”

Dorice Horenstein says it was an honor to serve in the IDF.

Born in 1966 in Tel Aviv to Iranian émigrés, she joined other young Israelis who went into the army out of high school – and was among the 10% of women who, in the 1980s, became officers or frontline soldiers. She was part of Nahal, an IDF program that combined military service and the establishment of kibbutzim and other agricultural communities.

During the first part of her service, picking apples on a kibbutz, she met Robert Horenstein, who was visiting a Sunday school teacher who had made aliyah. They married in 1988, two years after Dorice moved to Portland after completing her tour of duty.

In the military, she became a chief sergeant (rav samal), training other soldiers how to operate Uzis, M-16s and Galil guns. She also taught the important skill of topography.

“My service in the IDF changed me and made me the person I am today,” says Dorice, who has been education and program director at Congregation Shaarie Torah since 2001. “It gave birth to my personality, my ethics, my leadership. In Israel, 18-year-olds have an awesome responsibility – the responsibility to protect the country.”

“We grow from the things that make us uncomfortable,” she adds. “Serving in the army is the greatest growth that anyone can have. It takes you out of who you are, and it makes you who you are going to be.”

Josh Ross, originally from Texas, decided to stay in Israel after a junior year program at Hebrew University.

“I wanted to be an Israeli, and I understood that being an Israeli meant serving in the army,” he says. Josh, now 44, had visited Israel on a Young Judaea program in 1990-91 during the first Gulf War. He’d also participated in Marva, an IDF program for young Jews from the diaspora.

He served in the IDF from March 1995 through December 1996, ultimately becoming a sergeant with the 890th Paratroopers Brigade. After six months of basic and advanced training, he was stationed in southern Lebanon, attached to an intelligence unit in the northeastern section of the security zone overlooking the Litani River.

“We could see the entire valley and all the way to the coast,” Josh recalls They could see two mountaintop outposts – one at Beaufort, a Crusader-era castle, and the other at “The Pumpkin” – the subject of the recent book, Pumpkinflowers. “We would always see smoke billowing out of those areas.”

His service also included time in the Golan, Hebron and Nablus. Afterward, while working at a Jerusalem restaurant, he met Racheli Karlinsky. They married in 2000, shortly before moving to Portland, where Josh attended law school. He’s been an attorney with Stoll Berne since 2005 and is a member of Havurah Shalom.

“I’m still a citizen of Israel, and my family is there,” Josh says. “I appreciate the need for defense and for a strong military. But my service in the IDF changed my view of what is going on there. It showed me how brutal and wrong the occupation is.”
“I have mixed emotions.”

Edit “Eddy” Meese joined the IDF after graduating from Tualatin High School in 1998. She credits her father, Michael Suchy, a retired Israel Air Force officer and former Oregon resident now living in Israel, for her decision to serve. “He taught me what it meant to be a Zionist and serve my country,” she says.

Today, she is a veterinarian at Willamette Valley Animal Hospital in Keizer and lives with her husband, Zvika, in Albany.

But during her service from 1998 to 2003, Eddy broke new ground for women within the Ordnance Corps of the IDF.

“I was the first woman in the IDF to be stationed in a combat unit as a tank electrician,” she recalls. “Until then, female tank electricians became instructors. I wanted to be in combat.”
After officer training, she was with a mounted infantry unit in Nablus, then served as an Ordnance operations division officer in Ramallah, making her also the first woman to hold these positions. She later moved on to Pikud HaOref in Haifa and then to Tel Hashomer.

Her primary responsibilities were to support the ground troops, which included everything from heading into the fighting to repair a broken-down tank, to repairing artillery in the field, to assisting in creating operational plans for different scenarios based on the current events in the region.

“In a historically male-dominated Corps, my service opened to women many Ordnance positions that had previously been closed to female soldiers and officers. In that sense, I feel like my service really achieved something.”