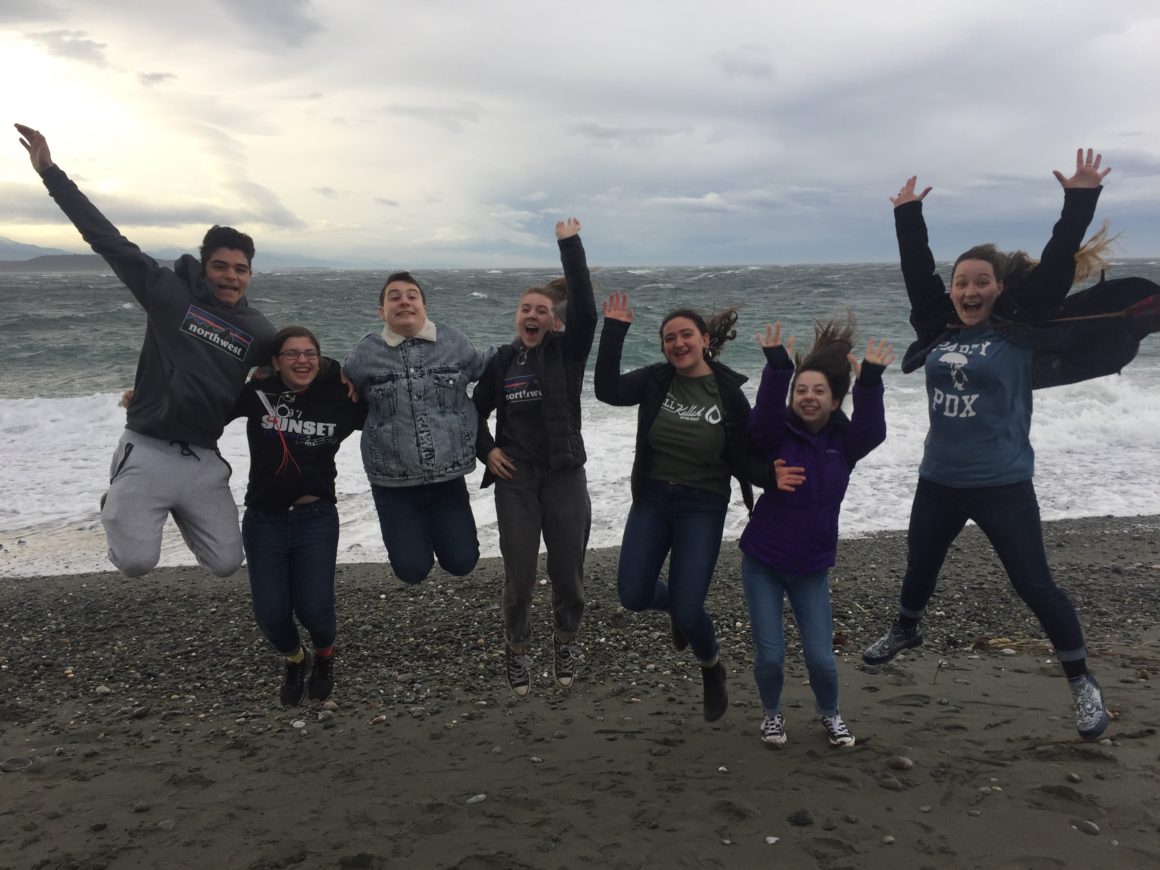 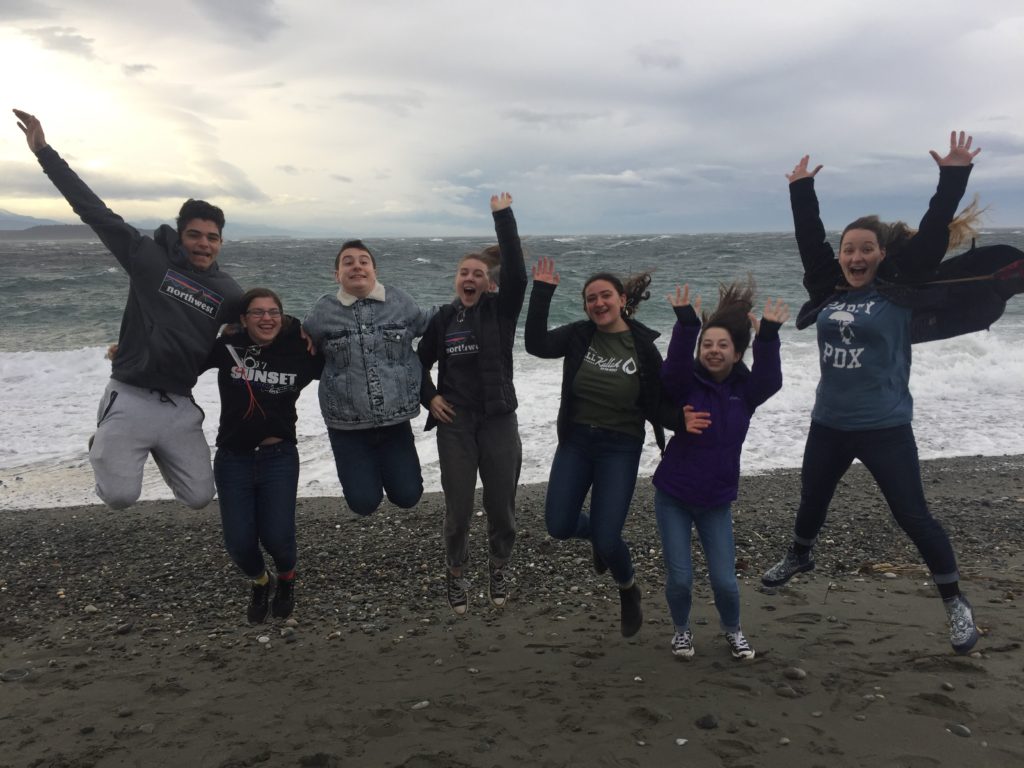 PARTY: Beth Israel teenagers, above, enjoy a day at the beach with their youth group, Portland Area Reform Temple Youth.

Editor’s Note: This story about Jewish youth groups was written by Melissa Diamond for our May 2014 issue. While Melissa is now a senior at the University of Washington in Seattle, the sentiments she shared as a teen and her descriptions of the youth groups are still pertinent, even though many of the groups’ leaders have changed. As Melissa predicted, her own Jewish journey has continued. She has participated in many social justice projects informed by her Jewish values. She served two summer internships with Planned Parenthood and was a campaign intern for U.S. Rep. Pramila Jayapal in Seattle in the run up to this year’s mid-terms. Melissa plans to go to Israel on Birthright this summer.

See the bottom of this story for a list of contacts for local youth groups in 2018-19. 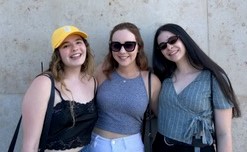 Discovering one’s Jewish identity is a lifelong journey. At 17 years old, I have attended both private Jewish day school and public high school. Surrounded by my Jewish peers, my elementary and middle school years were a time when I was able to study Judaism and easily embrace my heritage.

It wasn’t until I began ninth grade that I experienced what it is like to be the only Jew in the room, struggling to represent my religion while simultaneously striving to fit in with the many strangers I hoped to impress. This tense feeling does not stem from a shame of my Judaism. I love celebrating Hanukkah, spending my summers at Jewish camp and even traveling to Israel. It also does not come from any anti-Semitism among high school students; my school is a generally diverse and accepting place. Most simply put, it is just hard to be the odd one out, and while I was lucky enough to go to Jewish day school, some of my peers never had the opportunity to make other Jewish friends.

Fortunately, Portland has many Jewish youth organizations that offer the social and cultural benefits of Jewish day school. These organizations provide teens with a community not found at school, yet correspondingly teach them to be proud of their Judaism outside the group.

There are a few different varieties of youth groups in Portland.

First, there are the non-denominational and citywide groups open to any Jewish teen. Portland has three – BBYO, NCSY and the Oregon Jewish Community Youth Foundation. Eugene also has NCSY and BBYO chapters.

“BBYO’s mission can be summed up in one phrase – more Jewish youth, more meaningful Jewish experiences,” says BBYO Portland Director Sam Swire. BBYO has 80 members in four Portland chapters that meet weekly. “Sometimes they will have a board game night, sometimes they won’t even meet at their regular location and decide this week’s meeting will be having pie at Shari’s or dinner at Red Robin,” says Swire.

What makes BBYO unique is its commitment to youth leadership. “The adult supervisors, who are BBYO alumni, are there to provide support and make sure everything is safe. The teens are doing all the programming,” says Swire. “The teens are given a lot of freedom in how they program, and as a result of that, not only are there more creative ideas that come out but also more leadership skills and more of a sense of responsibility.” 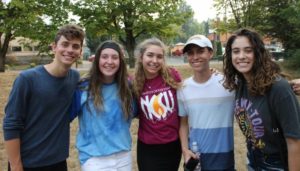 NCSY is also a nondenominational youth group. NCSY is focused on creating a Jewish identity in teens, and can achieve this in a number of ways that appeal to different people. “Every person is different,” says NCSY’s Portland Director Doovie Jacoby. “Some people just want to learn Hebrew, some people want to learn more about Judaism, some people want to study, some people just like the culture and club. There is something for every person. And for people looking to connect with Israel, we will help them get there.”

Activities include weekly Latte and Learn meetings at Starbucks, Jewish Student Union meetings at school during lunch and Israel trips, allowing NCSY to impact teens in a number of ways. “After NCSY, participants go on to make much stronger Jewish choices in life,” says NCSY Oregon Director Meira Spivak. NCSY does not charge for membership, which distinguishes the group and makes it available to any Jewish teen. “Anyone is welcome, and what I love about NCSY is when I look around the room and see teens from every single synagogue – and it doesn’t even matter,” says Spivak. 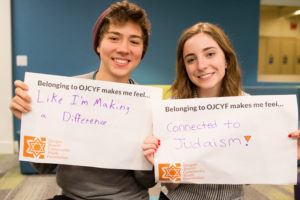 Tzedakah is one of the core values of Judaism, and if you want to specifically explore this area of your Jewish heritage, OJCYF is the perfect group for you. OJCYF, which is sponsored by the Oregon Jewish Community Foundation, brings Jewish teens into a professional environment where they will learn about philanthropy through the allocation of money they raise. “We have meetings once a month where we learn about how nonprofits work and how money is given and distributed. We learn what it means to be a nonprofit organization through both Jewish and non-Jewish organizations,” says Rachel Rothstein, an OJCYF advisor.

In addition to the monthly meetings, OJCYF members go on site visits to organizations they are considering donating to, as well as put on the annual benefit dinner where the majority of the money is raised. “Following the dinner, there is a large allocations process. Organizations submit requests for grant money. Teens start to really think about how their money can be used in different ways and see the impact that different organizations can have on a community,” says Rothstein.

If you are looking to further connect with your synagogue, Portland’s largest three synagogues, Congregation Beth Israel, Congregation Neveh Shalom and Congregation Shaarie Torah, offer affiliated youth groups. Portland Area Reform Temple Youth (PARTY) is Beth Israel’s chapter of North American Federation of Temple Youth. NFTY is affiliated with Reform Judaism and the organization Netzer Olami, a worldwide Zionist youth movement. PARTY brings teens opportunities for social activities but is also enriched with social justice and worship. NFTY’s mission is conveyed through 13 principles, which include “the unity of the Jewish people,” “the centrality of the State of Israel to the strength and survival of the Jewish people” and “the obligation to work for justice for all.” Congregation Kol Ami in Vancouver, WA, also has a chapter.

For members of Neveh Shalom and Shaarie Torah, United Synagogue Youth is available to Conservative Jewish youth. At Neveh Shalom, weekly meetings are held at the synagogue, but USY also holds frequent social events. “We’ve gone to laser tag,” says Rothstein, who is an advisor for USY as well as OJCYF. “This year we had a sleepover, as well as regional overnights. We went to Camp Solomon Schechter twice – in the fall and in the spring. At these overnights we have a combination of learning, fun and dance, as well as raising awareness about Israel and social action.”

A former member of USY, Rothstein demonstrates the longevity of involvement in synagogues and Jewish life after participation in the group. “USY is unique in that it is active in its synagogue community. Many of the teens teach at Sunday school, and they come to all the festivals and holidays,” says Rothstein.

While there are many youth groups to choose from, it is clear that in any organization teens will gain a greater connection to their Jewish peers and to their Jewish communities. “BBYO has brought me closer to the Jewish teens around me and helped me keep in touch with my Jewish culture,” says BBYO teen Sophie Rubin.

“Those that have been connected with youth groups have been involved in Judaism for a longer time. They have more interest and tend to do more in college, and really have more of a Jewish connection in life,” says Rothstein.

For teens, being an active member in a Jewish community is instrumental in fostering a lifelong Jewish identity. Whether you are looking to maintain your Jewish activity after Jewish school like I am, or you are hoping to discover your Jewish peers for the first time, Oregon’s youth groups give you that opportunity.