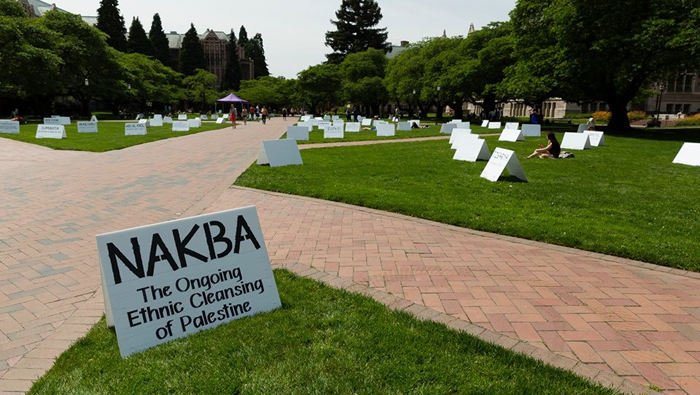 PHOTO: A SUPER University of Washington event on campus to commemorate the Nakba contained a sign saying, “Nakba, the ongoing ethnic cleansing of Palestine.”  Another sign read “Stolen Land.” Taken all together the signs demonize both Israel and Jews.  Source Credit: SUPER UW Facebook Page (May 16, 2016)

“The growing problem of campus anti-Semitism is no doubt a serious threat facing the Jewish community, but this disturbing and dangerous spike and the bolder, more brazen, methods of those perpetrating this hate are particularly alarming,” said Tammi Rossman-Benjamin, AMCHA Initiative director and co-founder.

The study, which examined anti-Semitic activity from January-June 2016 on more than 100 public and private colleges and universities with the largest Jewish undergraduate populations, found that 287 anti-Semitic incidents occurred at 64 schools during that time period, reflecting a 45% increase from the 198 incidents reported in the first six months of 2015.

“Instead of just boycotting Israel, the anti-Zionists are now boycotting Jewish students,” said Professor Leila Beckwith, AMCHA co-founder and one of the study’s lead researchers. “Sadly, all too often it is not debate but hate. The lines between political discussions on Israeli policy and discrimination toward Jewish students are being blurred. Anti-Zionists are attempting to harm, alienate and ostracize Jewish students; it is Jewish students’ civil rights that are being trampled. To properly address this rise in anti-Jewish bigotry, universities must adopt a proper definition of contemporary anti-Semitism and use it to educate the campus community about the distinct line between criticism of Israeli policies and discrimination against Jewish people.”

The report concluded with recommendations for university administrators including (1) adopting a definition of anti-Semitism that identifies all forms of anti-Jewish bigotry, including when criticism of Israel crosses the line into anti-Semitism; (2) allocating resources to educate students and faculty about contemporary forms of anti-Semitism and anti-Jewish discrimination; and (3) establishing clear guidelines about free speech protected under the First Amendment and conduct which violates others’ civil rights, including disrupting or shutting down campus events and restricting free speech and right of assembly.

A full copy of the report can be viewed here.

AMCHA Initiative is a nonprofit organization dedicated to combating, monitoring and documenting anti-Semitism at institutions of higher education in America.