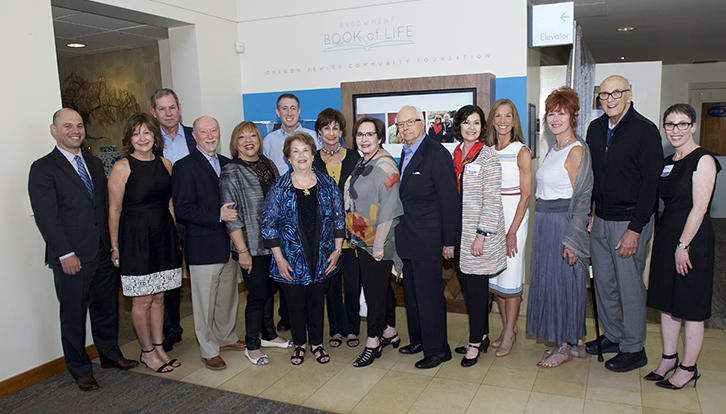 PHOTO: All the people who signed OJCF’s new Endowment Book of Life stand in front of the installation at the MJCC. Second from right is OJCF’s 2017 Legacy Society honoree Harold Pollin. Photo by Naim Hasan Photography

Pollin was instrumental in the establishment of the OJCF in the late 1980s, serving as its first president when it was known as the Portland Jewish Community Foundation.

“Harold has a real Jewish heart and he’s a true visionary,” said Jim Meyer, who introduced Harold at the annual meeting.  “It’s one thing to have an innovative idea that could change the future of a community,” Meyer added. “It’s another thing to make that happen. Harold did both – not alone – but he was the leader and the primary spokesman for the [Foundation] concept from day one.”

In addition to honoring Pollin, OJCF was thrilled to introduce its new Endowment Book of Life to the community. Life & Legacy National Director Arlene D. Schiff was in attendance and spoke about the impact an Endowment Book of Life can have on a community. Thousands of families and individuals have signed Endowment Books of Life in more than 40 Jewish communities across North America and now legacy donors in Oregon and Southwest Washington will have the opportunity to do so as well.

“The Endowment Book of Life has proven to be a very meaningful way for legacy donors to share their histories, values, visions and hopes for the Jewish community with their families, friends and future generations,” said Schiff. “These testimonials serve as a public statement of the important role the Jewish community and valued organizations have played in a donor’s life, providing the story behind one’s financial legacy commitment.”

Important board business was also conducted at the annual meeting, including the adoption of revised articles of incorporation and the election of new at-large board trustees. Outgoing trustees were acknowledged for their service and special thanks were shared with Jeff Wolfstone, whose term as OJCF’s board chair has concluded. Steve Laveson is the Foundation’s new board chair for the next two years.

A complete listing of OJCF’s 2017-2018 Board of Trustees is available at https://ojcf.org/who-we-are/board-of-trustees/. The Endowment Book of Life, located in the lobby of the Mittleman Jewish Community Center, is likewise available on OJCF’s website and http://www.ojcfbookoflife.org/.

'OJCF 2017 Annual Meeting' has no comments