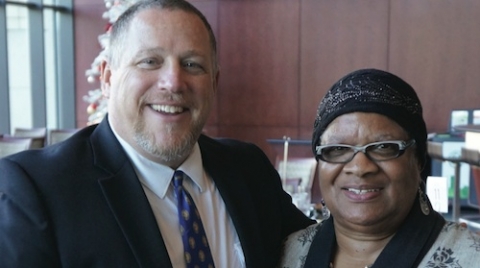 Sam Sachs, 46, calls his volunteer efforts on behalf of minority rights tikkun olam, healing the world. He’s been called an advocate, activist and even an agitator.

When he sued the Oregon Public Safety Academy in 1996 for anti-Semitic comments during his training there as a corrections officer, it launched a state task force investigation. Sachs says the task force determined there were systemic issues in the academy. Since then Sam has earned a bachelor’s degree in black studies from Portland State University, worked to eliminate Native American mascots for school teams and filed an OSHA complaint on behalf of Portland Park Rangers for training (such as CPR) to deal with homeless populations in the parks. He was also instrumental in expanding the Rooney Rule (requiring minority candidates be interviewed for head coach openings on NFL teams) to public university sports programs in Oregon. Oh, and he returned to the police academy in 2008 as an instructor in diversity. As part of his role as a Human Rights Commissioner for the city of Portland, he was recently named chair of the commission’s Community Police and Relations Committee.

Racial tensions between police and minorities have soared recently in the wake of grand jury decisions not to indict police officers who killed an unarmed black teen in Ferguson, MO, and an asthmatic black man in New York, who was put in a chokehold. In the wake of Ferguson, Sam’s says his immediate reaction was, “We still have work to do, and we’ve made progress.”

“People are divided on the decision to not indict, and it seems largely to be across racial lines and a distrust for police,” he adds. “To me there is a much deeper systematic problem around the way people of color are treated by police in this country, and the research and statistics support and validate that problem. People of color, especially black people, are justified in their anger and frustration.

“My role as the chair of the Community Police and Relations Committee, as I see it, is to work with the other members of the committee to try and provide some sort of balance and progress to help bridge the gap between the community and police, and to address these systematic problems.” Portland Police Assistant Chief Michael Crebs agrees with Sam’s description of the committee and adds that Sam was a good choice to chair the CPRC, especially in the current nationwide climate. “Sam has a good heart and passion for doing the right thing,” says Crebs. “That alone gives him a lot of credibility in the eyes of both the police and community.”

“Sam is a good person and someone I look up to,” adds Crebs.

Lawrence P. O’Dea, who assumes his new post as Portland Police Chief Jan. 2, met with Sam before he was appointed to the CPRC. “I very much appreciate Sam for his honesty, directness and commitment to Portland becoming a better community,” says O’Dea. “I appreciate his openness and thoughtfulness. The CPRC has been critical in helping the Bureau to continue to improve critical functions in the Police Bureau such as force policy and equity work.” Sam says that improving community relations will require open, honest and transparent communication, which will help build necessary trust.

“The police and community have to work from a place of trusting each other’s goal is building better relations,” says Sam. Leading up to the Ferguson verdict, that approach paid off. “I am very pleased with the work that the Police Bureau has done around our response to the Ferguson decision,” says O’Dea. “Police leadership and community leadership came together working on having a safe and productive event for weeks prior to the actual announcement. One of the most important priorities for the Police Bureau is to support people’s rights to peaceably assemble for free speech and expression events.” Sam says he is confident that things will continue to improve under Chief O’Dea.

“In the year to come we will have a new chief who is committed to seeing the equity work become a reality and is committed to fine-tuning the culture of the Portland Police,” says Sam. “I believe Chief O’Dea wants equity to be his lasting legacy as the chief.” Sam’s goal as CPRC chair is to reach out to the community to engage people in being part of the work. He says he believes the police members of the committee, including O’Dea and Crebs, are committed to improving relations with the community. “They do the work every day as police officers and community members to bridge this divide we have,” says Sam.

Public safety and community action were also key motivators in another project Sam helped create. Sam is a founding board member of Connected, an effort that started April 27, 2011, in response to the shooting death of 14-year-old Shiloh Hampton. A few dozen men and women, nearly all of whom are African- American, meet at 4:30 pm at Portland’s Holladay Park near the Lloyd Center. Sam says the group formed to “take back the park” and put an end to youth violence. In the group’s first year, crime in the park dropped 23%. In addition to fulfilling the Jewish value of tikkun olam, Sam attributes much of his motivation to the lessons of the Holocaust.

Seeing the potential for stereotypes and discrimination to descend into pure evil motivates him to fight for the rights of all minorities. Personal experience also plays a role. When he was the focus of anti-Semitic comments in the police academy, Sam filed a suit because, “I wanted to make sure nobody went through what I went through.”

Though the task force determined the anti-Semitic slurs were isolated incidents, the governor’s report found bias against women at the academy and some sexual harassment, blaming the problems in part on an organization dominated by white men. “Sometimes white males struggle with saying racism and sexism exist,” says Sam. He’s not content to simply follow the lead of others. He takes active leadership roles in many projects. For instance, he was a key player in expanding the Rooney Rule to state universities. Having become familiar with legislative procedures as an intern in former Oregon Sen. Avel Gordly’s office, he approached Rep. Mitch Greenlick (D-Portland) about the issue to help promote diversity in Oregon sports programs.

“Sam really made it happen,” says Greenlick. “I was just his vessel in the legislature. He did an amazing amount of lobbying. It went remarkably easy.” This legislative session, again at Sam’s behest, Greenlick has introduced another bill that would provide oversight to ensure universities follow the rule. Greenlick says that when the original bill passed in 2009, he and Sam disagreed on including an enforcement provision. Greenlick says it would not have passed if enforcement had been included in the original bill, because that would have entailed a cost and it would have gone to the Ways and Means Committee.

“Mostly it has been followed,” says Greenlick, though he says the few exceptions have frustrated Sam. So now Greenlick is proposing having the Higher Education Coordinating Committee provide an oversight role. Though he has not taken an active role, Greenlick has also watched Sam’s efforts to eliminate Native American mascots at all K-12 public schools in Oregon. “Sam is so committed to and concerned with human rights and justice,” says Greenlick. “I admire him and respect him a lot.” Sam says he took up the issue on mascots after
learning the impact they have on self-esteem among Native American youth.

In May 2012 the Oregon State Board of Education adopted a rule to ban Oregon public schools from using Native American mascots as of July 1, 2017. But early last year Senate Bill 1509 passed allowing schools to keep Native American mascots if the school has a written agreement with a tribe and the mascot follows a set of rules. “We are still working to have Native American mascots eliminated by 2017, because studies show even acceptable race- based mascots have a negative impact on minority students,” says Sam. Growing up in Albany where he says his family members were the only Jews he knew in town, Sam says he learned early to stand up and be “a proud Jew.”

He says his father, Eral Sachs, z”l, would take his children to Corvallis, where Sam attended religious school at Beit Am for a time. The family celebrated most holidays in Portland with his grandparents, Ralph and Florence Sachs, at Congregation Shaarie Torah. When he was 11, Sam says he started to wear a Star of David necklace visible outside his shirt. That first star is now buried with his grandmother in the Shaarie Torah cemetery, but Sam has replaced it with a second Star of David that he still wears.

He also has his late grandfather’s kippah, which he wore under his helmet when he played football in high school and at Western Oregon University, where he studied law enforcement after serving three years in the Army. He left before graduation when he was hired as a corrections officer at MacLaren Youth Correctional Facility. His knowledge and pride in his Jewish heritage got a boost when he was in his 20s and he unexpectedly gained an extended family – and not through the traditional route of marriage.

When Sam’s parents divorced, his father felt that raising 7-year-old Sam and his older brother, Hiram, and sister, Rachel, was all he could handle. He felt toddler Eli would be better off with a family who had more time for him. So Eral put Eli up for adoption on the condition that he keep his first name and be adopted by a Jewish family. When Sam knew Eli had turned 18, he began writing to every Jewish congregation in Oregon telling the rabbis he was hoping to be reunited with his brother. “In 1992 I got a call from Judy Fiestal, a member of Havurah Shalom, saying she thought her son, Eli Rosenblum, was my brother. We set up a meeting. I met him and became part of his family,” says Sam.

“When Eli’s younger brother, Jacob, had a bar mitzvah, he asked me to have mine with him.” Judy taught him Hebrew and he says he owes a lot of his knowledge of Jewish values to Judy and her ex-husband, Stu Rosenblum. When Sam decided to return to college to finish his degree, he focused on black studies at Portland State University feeling it would give him more credibility in his work. He also took classes in other minority cultures and women’s studies. And when he graduated he started working for equality for all and hasn’t stopped since. In addition to his advocacy work, he has created a website “The No Hate Zone” focused on ending hate and racism locally through education and information (thenohatezone.com).

“There’s still a lot of great work to be done,” he says.