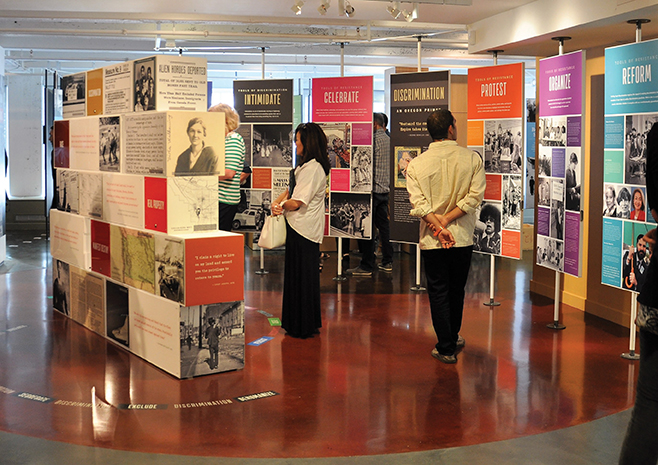 Staff at the Oregon Jewish Museum and Center for Holocaust Education have spent the past six months settling into their permanent home in the Pearl District – and that means filling the new positions that come with the larger building.

For the museum’s education department, that means finally hiring a full-time educator and filling an education coordinator position.

In the museum’s former space, April Slabosheski filled the role of Holocaust educator alongside part-time educator Cheyenne McClain. With the new larger space, the team has doubled in size by adding two employees. April oversees the expanded department as manager of museum and Holocaust education.

Educator Marta Eichelberger-Jankowska joined OJMCHE in October after moving to Portland with her husband and son, who attends Portland Jewish Academy. The family moved here from Washington, D.C., where Marta had finished her M.A. in experiential education and Jewish cultural arts at George Washington University. While in D.C., she was an intern at the United States Holocaust Memorial Museum.

Marta was born and raised in Warsaw, Poland. In Warsaw, she worked for many educational institutions dedicated to the transmission of the Polish Jewish heritage. These included the Taube Center for the Renewal of Jewish Life in Poland and the POLIN Museum of the History of Polish Jews.

The expansion of OJMCHE’s education team will enable the museum to accommodate more students, further develop curriculum and have a greater response to local hate and anti-Semitic incidents across the state. The education team’s main focus is on guided school group tours, but the team also supervises the Oregon Holocaust Memorial and museum exhibit docents.

School tours visit the current temporary exhibits plus three permanent, core exhibits: Discrimination and Resistance, An Oregon Primer, which identifies discrimination as a tool used to affect varied groups of people over the history of this region; The Holocaust, An Oregon Perspective, a history of the Holocaust that employs the stories of Oregon survivors; and Oregon Jewish Stories, an installation focused on the experience of the Jews of Oregon.

Since the beginning of the 2017-18 school year, the first at the museum’s permanent home, the largest group to visit was 160 middle-schoolers from Beaverton. For the first time, a school group from Eugene bussed for two hours to visit and tour the new museum.

The education team emphasizes outreach to schools and teachers around the state.

“It’s often a teacher who takes an interest,” April says. The museum sends a postcard to every school in the state at the beginning of the school year, does regular mailings and maintains email lists to make sure schools are aware of the programming.

Marta is still settling into Portland, but she is looking forward to making a positive impact on Holocaust education.

“Coming from Washington, D.C., I do feel the cultural difference,” Marta says. She is assessing and absorbing the experience with the school groups she’s encountered so far in order to adapt her methods to connect with Oregonians.

Marta says she is especially passionate about the impact of third-generation survivors, of which she is one.

“I’ve had the experience of speaking as a third-generation witness in Poland, mostly in the context of the renewal of the Jewish community, but also referring to what the impact is for us as Polish Jews,” she says.

She also hopes to do more to highlight pre-war Jewish history and culture.

“I want to make people aware of both the Holocaust and of the culture that was annihilated,” she says.

As for taking on the task of Holocaust education at a time when the political climate is tense, Marta says she is prepared.

“I am positive and optimistic, but also aware of how difficult the task is. I believe in what we do, I believe I chose the right place because of its focus and approach to the subject, and working in a team gives me faith we can do something significant.”

As for April, she’s thrilled to have expanded her team and be working in the museum’s permanent home. The museum’s new core exhibits help students understand discrimination in Oregon’s history, which she says feels especially crucial now.

“We are becoming more holistic in our approach to education at the museum,” April says. “That doesn’t take away anything from what we are doing in Holocaust education. … (We are) weaving it into every other type of education we are doing.”

“Part of our mission educationally is to look at our local Jewish history and our local history in general, not just Jewish, and to ask ourselves what is important to share with the public and what about all of this can help up shape the future,” she says.

“We are able to take a wide view of issues common in histories of discrimination,” she says, adding that different histories don’t compete with each other, they offer complementary perspectives.

April was recently named one of this year’s Light a Fire 2017: Emerging Leaders, sponsored by Portland Monthly. She was the recipient of a fellowship with the Council of American Jewish Museums to the POLIN Museum of the History of the Polish Jews, and was honored with other recipients at a dinner and featured in the publication.

April says she is grateful to have a solid education team and for the experience Marta brings. “She could not have come at a more important time.”