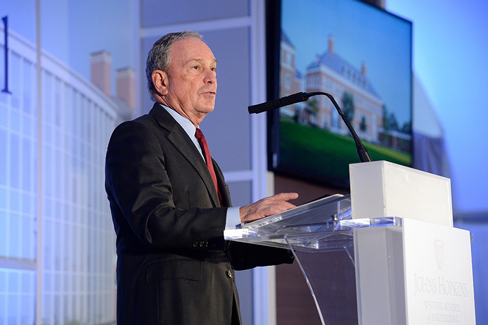 “This historic gift reflects Mike Bloomberg’s deep belief in the transformative power of higher education and his insistence that it be accessible to all qualified students, regardless of financial means,” Johns Hopkins University President Ronald J. Daniels wrote in a message to the university community today. “It also affirms Mike’s profound devotion to this university for the role that it played in enriching his life.”

Bloomberg, a 1964 Johns Hopkins graduate, announced his historic gift in a New York Times op-ed in which he identified college affordability as a national challenge.

“America is at its best when we reward people based on the quality of their work, not the size of their pocketbook,” Bloomberg said. “Denying students entry to a college based on their ability to pay undermines equal opportunity. It perpetuates intergenerational poverty. And it strikes at the heart of the American dream: the idea that every person, from every community, has the chance to rise based on merit.”

For more on Bloomberg’s gift, read the full text of Daniels’ message to the community here.