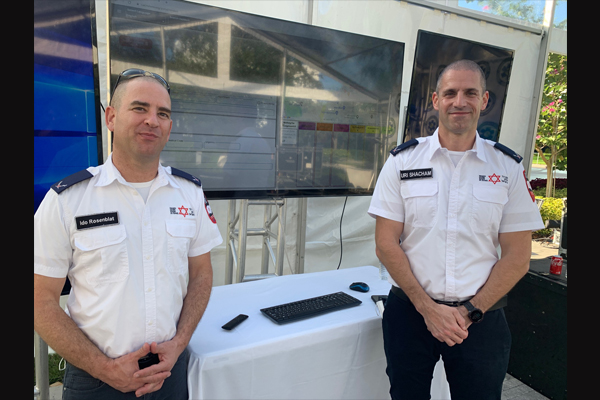 Magen David Adom’s groundbreaking technology, which powers the emergency dispatching systems in Israel for medical emergencies and the National Fire Rescue Service as well as for the EMS system in the Philippines, is now being used in the United States too.

Yesterday, Hatzalah South Florida, an all-volunteer EMS organization serving Miami-Dade and Broward counties, announced that MDA’s technology is now powering its new dispatch system. It marks the first time MDA’s dispatch technology has been adopted by an EMS organization in the United States.

“Given our close relationship [with MDA], it made perfect sense to adopt Magen David Adom’s technology and bring those innovations here,” said Joseph Dahan, director of Hatzalah South Florida and an EMT with the organization.

Hatzalah South Florida is one of the more than 50 independent hatzalah (Hebrew for “rescue”) volunteer ambulance services that primarily serve Jewish communities in the United States, Israel, and around the world.

“Magen David Adom is in the lifesaving business,” said Uri Shacham, MDA’s chief of staff and a Medevac paramedic. “So we’re pleased to be able to share our technology to help Hatzalah of South Florida in their sacred work of saving lives in their local community.”

In a ceremony attended by several hundred people last night in Aventura, Florida, the two organizations signed an agreement to continue to share knowledge and training, making their years of cooperation official.

While nearly all EMS organizations purchase dispatching solutions from for-profit technology companies, Magen David Adom began developing its own technology in-house in 2006, after concluding that third-party systems were not meeting the organization’s needs.

“In the 2000s, Magen David Adom was faced with responding to the Second Intifada and a war with Lebanon,” said Ido Rosenblat, Magen David Adom’s chief information officer. “The types of incidents we were responding to — including simultaneous suicide bombings and missiles falling on Israeli cities — weren’t the types of emergencies software developers based in the U.S. and Europe could ever have imagined.

“It became obvious to us that we would need to develop our own systems in-house, systems that would conform to the way we work, rather than conforming the way we work to accommodate the limitations of the systems,” he said. “So, by developing our systems ourselves we now have EMS applications designed by an EMS organization.”

Today, Rosenblat oversees more than 50 full-time programmers, many of them EMTs or paramedics themselves, who are continually adding new capabilities to the system.

“Because many of them are EMTs, they’re acutely aware of how the system needs to perform for the end-user,” Rosenblat said.

With that in mind, MDA designed its CAD system so all its functions operate as one integrated unit, making it easier for dispatchers to use, with all relevant data accessible from one workstation.

Taking the software development in-house has also enabled MDA to develop next-generation technologies that enable EMTs and paramedics to arrive faster and better informed about the nature of the patient’s illness or injuries, reducing the time in which patients receive potentially lifesaving treatment.

While Hatzalah South Florida’s system uses technologies already developed by Magen David Adom, they were customized by MDA to meet Hatzalah of South Florida’s unique needs. MDA designed it to be cloud-based, as opposed to the mainframe system MDA uses in its own National Operations Center. By having a cloud-based system, Hatzalah South Florida can seamlessly move its dispatching operations from location to location when necessary, an important consideration for the rapidly growing organization.

With Hatzalah South Florida’s new system, the organization’s dispatchers will be able to:

• Capitalize on AI (artificial intelligence) technologies to dispatch multiple resources — including first responders and the nearest Hatzalah ambulance — instantly and simultaneously — without having to await action on the dispatcher’s part, ensuring the fastest possible response. Only those EMTs responding to the call are privy to information about the call, ensuring the highest level of patient confidentiality.

• Pinpoint the exact location of cell-phone callers, an important consideration since 80% of all emergency calls are made from mobile phones and callers aren’t always certain where they are, especially in a car accident. People calling Hatzalah South Florida will be automatically geolocated by clicking on a text link that will provide their exact GPS coordinates to the CAD (computer-aided dispatch) system.

• Respond to text messages. There are times when people needing emergency help are unable to speak because of an injury or because they’re in a dangerous situation where it’s prudent to remain inaudible to avoid detection. Hatzalah’s system enables the organization to respond and converse via text, automatically in multiple languages.

• See live visual feeds of the scene. EMTs and paramedics using Hatzalah South Florida’s proprietary smartphone app can show dispatchers live visual streams from the scene of a medical emergency, enabling them to make crucial medical decisions, and allocate resources, depending on the severity of the injury or illness.

“While we brought our technology to South Florida first, we’re amenable to sharing it with any American EMS organization or PSAP [public safety answering point],” said Rosenblat. “We’re in the lifesaving business, so if there’s any way we can help anyone else achieve that goal — whether it’s through sharing our experience or our technology — we’re onboard.”

MDA Customizes its Computer-assisted Dispatch System for Hatzalah of South Florida from AFMDA on Vimeo.