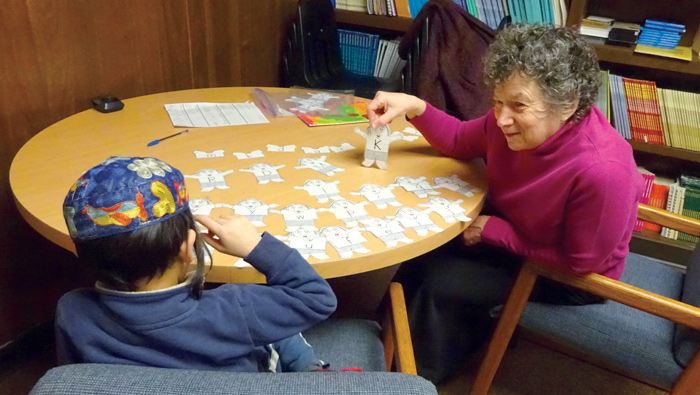 Every child has a time when he or she would benefit from some one-on-one time with an adult. For some it’s extra help with reading, for others it’s enrichment. At Maayan Torah Day School, a cadre of volunteers has stepped up to provide that one-on-one supplement.

Diane Blitzer, who volunteered to lead art lessons, has crafted teddy bears and a Torah scroll for the Maayan preschool. She stuffs her teddy bears with black beans instead of fluff to provide a calming weight to embrace students. Unlike most commercial toy scrolls, Diane’s Torah scroll has a removable mantle so children can practice “dressing the Torah.” Her “3D” volunteer projects grew directly out of her work as an architect.

Recently Diane added “reading buddy” to her volunteer repertoire. Now meeting weekly with an elementary student from Israel, she has discovered she enjoys the individualized interaction as much as the student does.

“I think it’s powerful for kids to get reinforcement from someone other than their parents, someone who wants to sit and read with them,” says Diane. For her part, Diane says she enjoys the fact that “kids are good at making an adult think; they ask moving questions.”
Diane is just one of the adults experiencing the interactions that benefit both parties at Maayan.

“A number of volunteers work with our students; these volunteers are reading buddies, big brother types and learning supports,” says Maayan Principal Aviel Brodkin. “They don’t have family or students connected to the school, they were just looking to get involved in children’s lives in our community.”

Another of those volunteers is Bruce Banasky, 67, who recently semi-retired from his family business.

“I had heard by word of mouth for the past few years that the school was filling a community need since its inception,” says Bruce. “Recently I heard Aviel was looking for volunteers.”

Noting he enjoys “giving back to the community,” with more free time now, he added Maayan to his other volunteer efforts, which include visiting seniors at Cedar Sinai Park and helping with recreational programs at the Shriner’s Hospital for Children in Portland.

“I enjoy children and they seem to enjoy me,” says Bruce. “To me it’s all about being yourself and letting them be themselves.”

Bruce works with two students at Maayan. “Both are lovely, caring, well mannered and highly intelligent,” he says. “I read both Hebrew and English with them, play some Hebrew letter board games with them and we do some light indoor kickball as needed!”

For volunteer Devora Fleshler, reading with a student at Maayan is in part a way to repay those who read with her children when they were young. She says Shoshana, now 24, needed extra help with reading, and Yofim, now 21, whom Devora and her husband, Aki, adopted from Russia at age 7, needed help both with reading and adapting to a new culture. Now she reads with a fourth-grader from Israel each week, providing the support that was so crucial for Yofim.

“We are reading Charlotte’s Web,” says Devora, noting stories are a good way to stimulate conversation. “When we talked about Charlotte getting a pet, I asked her if she had any pets. She really opened up and starting talking about her little dog.”

As a nurse practitioner working in women’s health care for 23 years, Devora says nurturing was an important part of her day. She is now enjoying bringing that nurturing to her new role.

“There is a sweetness about young children,” she says. “It is very fulfilling.”

This is the second year that Alan Horowitz has volunteered at the school. A long-time speech pathologist in the Beaverton School District and with the Forward Stride therapeutic riding program, Alan says he went to look at Maayan Torah after hearing fellow Kesser Israel member Morris Engleson praise the program. “I decided it was a nice place to volunteer,” Alan says. Last year he read with one student every week; he says the teacher told him the student’s reading is much better this year, which has made a big difference for him. This year he is reading with two elementary children (one at a time) each week.

“The kids enjoy the time and the teachers appreciate the help,” says Alan. “It is a positive, good program and I enjoy being a small part of it.”