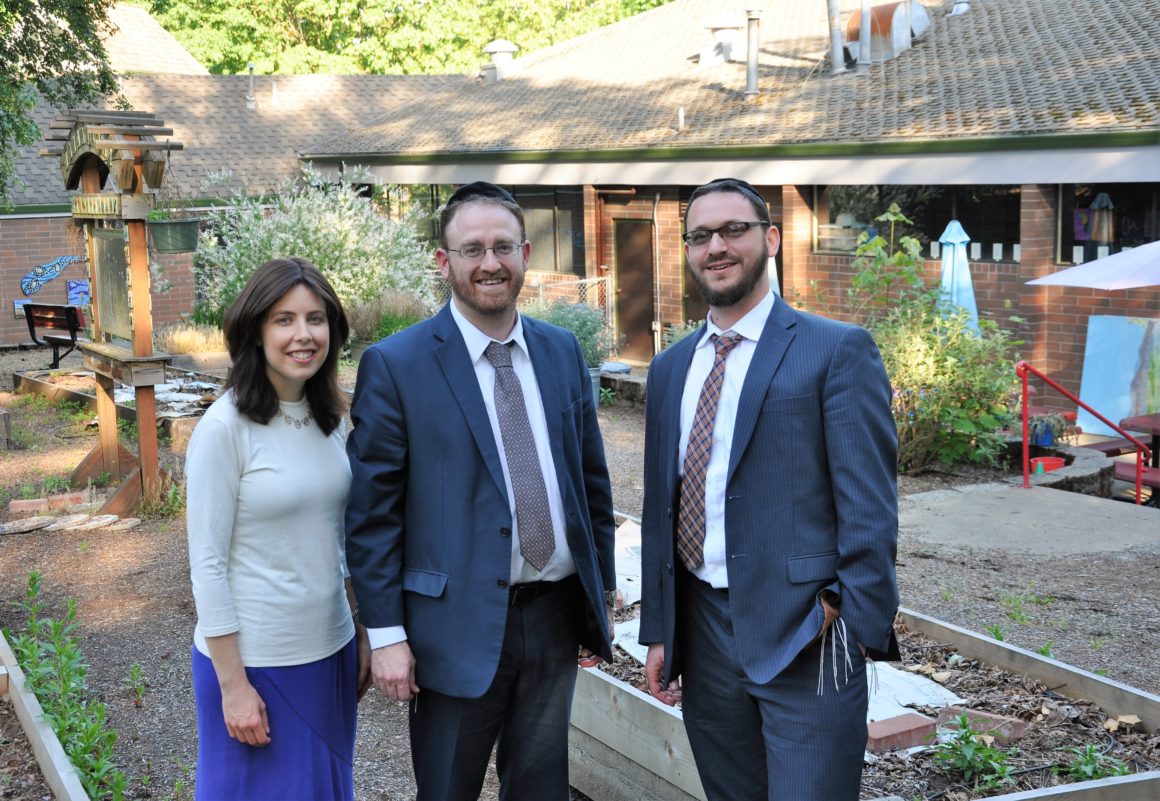 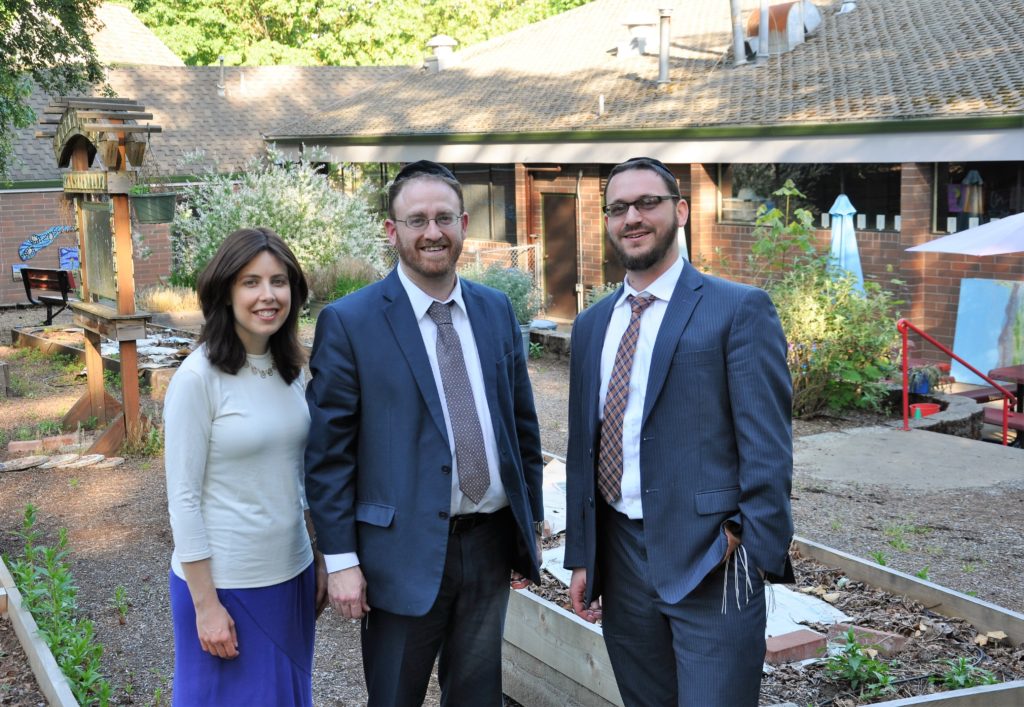 PHOTO: Maayan Torah Day School will move to this 1.2-acre campus for the next school year. The campus at 2 Touchstone Dr. in Lake Oswego has been the home of Touchstone School, which will close at the end of the school year. Standing in the garden behind the school are from left: Principal Aviel Brodkin, Dean Rabbi Kenneth Brodkin and Judaic Studies Coordinator Rabbi Yerachmiel Kalter.

After leasing space for seven years from Congregation Neveh Shalom, Maayan Torah Day School will start the next school year in a new home – a dedicated school building with a host of indoor and outdoor amenities.

On May 24, Maayan signed a five-year lease for the 13,000-square-foot school that features large classrooms and dedicated space for a variety of uses including a lunchroom and performing arts stage. The 1.2-acre campus hosts a garden area, outdoor playground and basketball court. 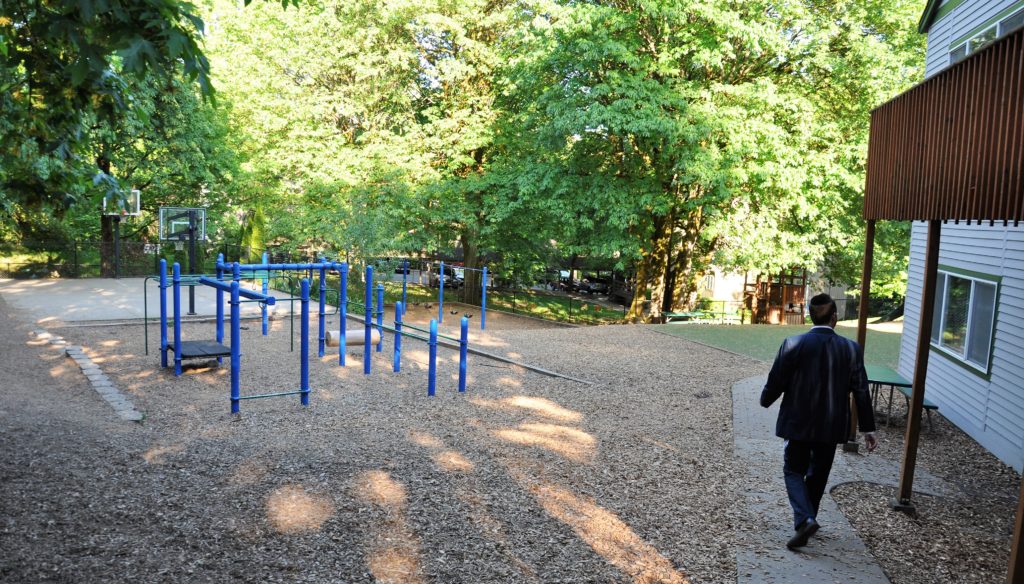 Due to the combined growth of Maayan and Neveh Shalom programs, the day school began to search for a new home in January. When the building housing Touchstone School became available in March, school leaders, the Jewish Federation of Greater Portland and local donors stepped up to help Maayan win the bid for the lease over five other schools.

“As we were looking for a new home, federation wanted to be engaged and help create a great solution,” says Rabbi Kenneth Brodkin, dean of MTDS. “They are a great partner, and this would not have been possible without them.”

Maayan Torah launched in 2011 with one preschool class of 10 students. This year, more than 90 children from eight congregations are enrolled in preschool through eighth grade with a waiting list for preschool. The school is accredited for K-12 by AdvancED. In 2017, Maayan students averaged a combined 86.1% on Oregon standardized assessments of reading and math – 7.5% higher than the two closest public schools.

JFGP Chair Ed Tonkin says he is proud of the role federation played in finding a new physical space for the Mayaan Torah Day School, one of three Jewish day schools in the community. “The community pulled together, and we were able to get Mayaan Torah Day School into a beautiful property, thereby ensuring a vibrant future for the school, which will allow it to grow even larger.”

“The school had basically one week to put their bid in on the building,” says JFGP President and CEO Marc Blattner. “We recognized the need to raise funds (the school needed about $70,000 a year in commitments for the next five years from donors). Federation leadership and Rabbi Brodkin raised that money in two days. At same time, Ed called a special federation board meeting for the Jewish Federation to serve as a guarantor (no funds needed) on the five-year lease. The board voted unanimously to serve as the guarantor. Two days later, Maayan Torah won the bidding process.”

Rabbi Brodkin says the school has a five-year lease, the option to renew for a second five years and the first right of refusal on any sale of the building.

“We are so excited about the new school,” says Maayan parent Jodi Garber-Simon, who, with her husband, Neil Simon, served on the committee to find a new site. “Maayan has really grown, and this new space will allow the students to have their own designated classrooms, a gymnasium, a stage for performances, multiple outdoor play spaces and room to grow more. The teachers will be able to decorate their classrooms.”

Maayan Torah staff stand on the artificial turf field below one wing of the school building.

With more space and amenities, the school is poised to attract more families. And since most of the current families live within 10 minutes of the new location, Rabbi Brodkin says they do not anticipate any loses.

“Every year, we have had to turn away kids from the preschool, which is a feeder into the elementary grades,” Rabbi Brodkin notes. With the larger space, he expects preschool and day school enrollment to continue their rapid growth. In addition to the school’s excellent secular education, he says families are attracted to Maayan’s values-based education and the strong Hebrew and Judaic programs.

“Neveh Shalom was such a fantastic space to start the school and to grow it, and we are so appreciative of the partnership we had with the synagogue,” says Jodi. “However, there is something so special about now having a school building all to ourselves – our own space where we can hang a sign out front and create the campus and atmosphere that reflects our school.”

“Now we are at the stage where it is important to have our own space,” says Rabbi Brodkin. “I’m happy to be able to take it to the next level.”