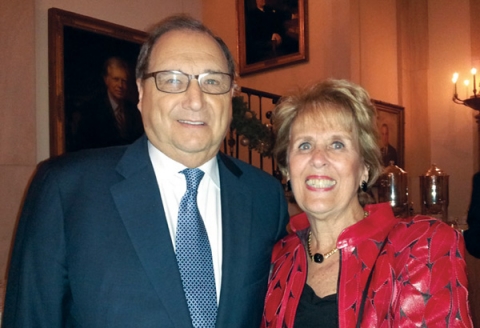 I lost count of the lavishly lit Christmas trees and the abundant decorations in green, red and gold. But for those of us honored to be invited to a Wednesday evening, Dec. 17, holiday reception at the White House, it was Hanukkah heaven.

I was in great company. Some 500 of us, Jewish religious and lay leaders, politicians, performers, Naval Academy midshipmen, members of the armed forces, journalists and activists, had received a coveted invitation (“The President and Mrs. Obama request the pleasure of your company”) to the annual White House Hanukkah Reception. My connection was Matt Nosanchuk, director for outreach on the National Security Council, whom I had met and befriended at a recent conference.

After a long wait on the security line on a cold, windy evening and going through four separate metal detectors (I overheard someone call it a “security cattle call”), we arrived at the southeast entrance and were welcomed into the hallowed halls by staff members and serenaded by The Shabbatones, a Jewish a cappella group at the University of Pennsylvania. We checked our coats and were free to meander through at least five warm and welcoming rooms, including the presidential library, to ogle and marvel at the impeccable décor. There were overstuffed couches, bouquets of fresh flowers on the tables and historic presidential portraits on the walls. Once inside the grand foyer, we heard the music of the U.S. Marine Chamber Orchestra performing a tribute to American-Jewish composers. The splendid buffet, under strict rabbinical supervision, featured lamb chops and latkes. Platters were filled – and refilled.

While some people noshed and schmoozed, others began to gather in the adjoining room behind a velvet rope leading to double doors topped by the presidential seal. It was clear that was where the Obamas would make their entrance. Jockeying for position while playing “Jewish Geography” with new friends was great fun. Case in point: Gwyneth Paltrow was standing close by. I tapped her on the shoulder. She turned and when I told her that growing up in Great Neck, NY, I had known her late father, Bruce Paltrow, I was rewarded with a big smile as she touched her hand to her heart.

When the doors opened and President and Mrs. Obama walked through, there was palpable excitement throughout the large room. (Ladies: she looked stunning in sleeveless blue silk.) The president began his remarks by noting it was an especially momentous day “because after five years, Alan Gross is free.” Gross, who is Jewish, had been arrested in Cuba five years ago for helping ordinary Cubans, including members of a small Cuban Jewish community, to access information on the Internet. Gross’s sister-in-law was among the attendees.

The Hanukkiah, on a stand in front of the Obamas, had been commissioned through the U.S. Embassy in Israel and created from clay, wood and iron by the children of Yemin Orde in Mount Carmel. Founded in 1953, this youth village first provided a safe haven to Holocaust orphans. Today it is the home of more than 400 children from around the world who have endured hardships ranging from extreme poverty to child neglect. The arms of the Hanukkiah represented the Jewish ancestry of Yemin Orde’s residents.

Atakalit Tesfaye, a Yemin Orde graduate, lit a candle and was joined by Dr. Adam Levine, who recently returned from Liberia “where he has been doing heroic work for Ebola patients,” the president said. Levine is among the Ebola Fighters recognized by Time magazine as a Person of the Year for having “risked and persisted, sacrificed and saved.” Manhattan Rabbi Angela Buchdahl led the prayers. She said she was “honored to be among so many machers,” and got an appreciative laugh when she observed that it was a miracle, along with the miracle of Hanukkah, that she, “a female Asian-American rabbi,” was lighting the Hanukkiah for an African-American president.

Joining in the chorus to sing the blessings as the candles were lit, I felt a sense of great pride – the highlight of a magical evening I will never forget. Actually I never will forget anything about that magical evening.