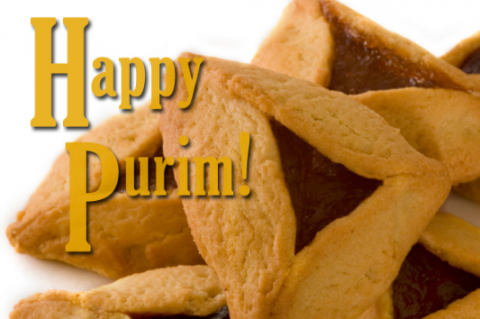 It’s Purim time!
That means merriment, costumes, candy, mishloach manot (“shalach munous” as we say in the old country) and happy kids. In my youth, we went to shul, listened to the reading of the Megillah and spun those groggers like crazy – even the synagogue’s elders didn’t get annoyed at us (although they were noticeably impatient). There was a Purim carnival and costume contests (of course Esther, Mordechai and King Ahaschverous were the most popular) and great merriment.

Best of all were the hamantaschen – so yummy! That was the only time of the year I saw bottles of lekvar in the house and my mother grating orange rinds for the dough and the fascinating way she cut circles out of the dough with the little Pyrex dessert bowls and formed the triangular cookies that we loved so much. And luckily – no poppy seed variety in our home.

Here in Israel, the customs are not much different. The kids definitely go for the top celebrities in their costume choices (cheap satin on identical costumes abound!) – doesn’t anyone sew originals anymore?

And the hamantaschen here take on a whole new meaning. First – they’re called “oznei haman,” as in “Haman’s ears.” Next – those fillings! Poppy seed – yes (unfortunately). Plus, there’s dark chocolate, milk chocolate, white chocolate, chocolate chip, apricot, raspberry, dulce de leche, apple, blueberry, and on and on. Lekvar? Hard to find. I learned to make my own prune filling and felt very proud.

But I just had an epiphany that sort of killed the holiday for me – it smashed all my previous beliefs. It broke something in me, something I took pride in and bragged about and made righteous statements about. Can you guess? It has to do with Vashti. My whole take on Purim has to be re-evaluated. Oh Vashti, Vashti, how you broke my heart.

I was one who always identified with the King’s first wife – the wife who refused to follow his order to dance naked for his guests. She stood her ground and said NO! I loved her even as a small child.

Vashti was my first feminist role model. Rather than Esther, who saved her people and did all that nice girlie-girl stuff, Vashti was my hero. Stand up for your rights! Be who you are! Say no to being exploited and paraded around. You are not just arm candy! Don’t let a man boss you around. You are woman. You are strong!

Recently, I was directing a Purim play I wrote for the International Women’s Club here in Israel. We were going to perform skits and songs with an irreverent, slightly feminist view and combine our Purim party with a celebration of International Women’s Day. That’s when I came upon the news that sent me to the Megillah searching for the truth.

Vashti, in fact, did not refuse to dance for the King as a matter of pride. On the contrary, it seems that our Vashti not only wanted to dance for King and his cronies, she would have been delighted to! But apparently, she had a skin condition and did not want to let the others see it. Are you kidding me? Vashti didn’t expose herself because she was embarrassed about a facial glitch? A pimple? Lack of Botox? A wrinkle? Oh honey, you were so misguided.

So … I lower my head in sadness and shame. My hero is hero no more. I will celebrate the holiday with a little less joy. I’ll eat my hamantaschen and get a kick out of all the celebrations, but I will have to find my heroes elsewhere.