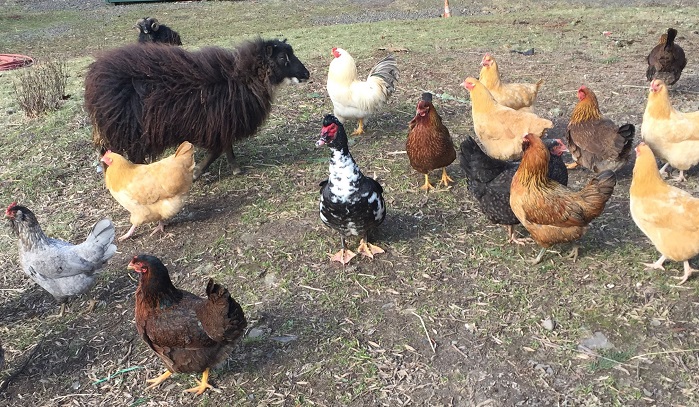 PHOTO: Animals roam freely on the Weisman family farm, where the family is closely connected to its food supply.

With the arrival of Passover later this month, most of us are looking forward to our seders. But for our distant ancestors Passover looked very different from today’s holiday. For the ancient Israelites, the primary Passover observance was not a seder but the ritual slaughter of a goat or lamb. While the seder may seem as if it came down from the time of Moses, it didn’t actually. The seder as we know it is a more recent innovation that didn’t really blossom until after the destruction of the Temple in Jerusalem in 70 C.E. However, for centuries while the Temple stood, Pesach was synonymous with the sacrifice of the Paschal or Passover lamb. The sacrifice was conducted to commemorate the Exodus from Egypt and the lamb that Jews had to slaughter in order to smear blood on their doors to warn the angel of death to “pass over” their houses.

Passover was a pilgrimage festival, and people would gather from far and wide in Jerusalem. On the afternoon of the 14th of Nissan, each family would bring a 1-year-old goat or lamb, without blemish, for sacrifice to the high priests, who would slaughter the animal. The priests would collect bowls of the animal’s blood and pass them to other priests who would sprinkle the blood upon the altar. The animal was skinned, the entrails removed and fat from the abdomen placed on the altar to be burned as an offering to G-d. The family would take their lamb or goat home to roast and eat with unleavened bread and bitter herbs. There would be a telling of the story of the Exodus during the course of the meal. The feast had to be completely consumed by midnight on the 15th of Nissan. With the Temple’s end came the end of the Paschal lamb sacrifice. Today the shank bone on the seder plate represents the Paschal lamb of long ago. We roast the bone just as the lamb was roasted in ancient times.

For Jews, especially at Passover, food both connects us to our past and ensures our future. Last year, I had an experience that really drove this point home. I was invited to a kosher slaughter. Using much the same methods as those used in the Paschal lamb sacrifice, kosher slaughter today is like living history.

Eliyahu Weisman is a yeshiva scholar in his mid-30s who has recently become a shochet (kosher slaughterer). I met Eliyahu through my work at Trader Joe’s. We struck up a conversation about kosher food in the Portland area, and he mentioned he had moved to Portland from Jerusalem with his wife, Malka, and their four children. He invited me to witness a shechita (slaughter). A city boy, I had never seen anything larger than a spider killed and was used to my meat magically appearing on grocery shelves in shiny plastic packages! Nevertheless, my curiosity was piqued.

Born and raised in Los Angeles, Eliyahu spent the last 16 years studying at Brisk Yeshiva in Jerusalem under the tutelage of Rabbi Dovid Soloveitchik. He began slaughtering animals in anticipation of his move to Portland. Uncertain of the kosher meat supply in Oregon, Eliyahu seized the opportunity to learn from a top Israeli shochet in Jerusalem, Rabbi Avraham Cohen.

Eating, especially for Jews, is about much more than simple nutrition. Eliyahu cites spiritual reasons as well for choosing to nourish his family on meat he slaughters himself. He believes that eating meat helps him to better serve G-d, citing the great sage Maimonides, who emphasized that “One cannot serve G-d if one is … malnourished.” In other words, eating well and taking care of one’s health is a necessary prerequisite for being present as an observant Jew.

For countless generations, meat consumed by Jews was procured locally and slaughtered by those familiar with kosher slaughter techniques. This method of slaughter, known as shechita, was intended to be as compassionate as possible, granting the animal a quick, painless death.

The Torah implies that a method of ritual slaughter exists, but does little to define it. “You may slaughter any of the cattle or sheep that the Lord gives you as I have instructed you.” Deuteronomy 12:21. The Torah prohibits the consumption of blood, which must be drained and removed.

The Torah also teaches us that prior to the flood, humans were primarily vegetarian. “I give to you every seed bearing plant upon the Earth…they shall be yours for food.” Genesis 1:29. After the flood, G-d informs Noah and his descendants that meat-eating is permissible “Every creature that lives shall be yours to eat; as with the green grasses …You must not, however, eat flesh with its lifeblood in it.” Gen 9:3. It was not until the Torah was revealed at Mount Sinai that the full flowering of kashrut went into effect.

Extrapolating from the barebones description provided by the Torah, the oral law or Mishnah (considered to have been revealed at Sinai contemporaneously with the Torah) contains a highly detailed set of rules pertaining to slaughter. The Mishnah was redacted and committed to writing in the first and second centuries of the Common Era by a group of rabbis. The chapter that codifies ritual slaughter is entitled Chullin.

The shochet’s knife is called a challif. While metal knives are most common, technically any material can be used in a challif, as long as it is sufficiently smooth and sharp.

The shochet gradually became a professional position requiring training and certification. The town shochet was a person of great honor in the community. A shochet must be a pious and “blameless Jew.” Just as kosher meat must be without blemish, so must a shochet be a man without blemish of the soul.

When I met with Eliyahu and his wife and daughter at Garden Vineyards in Hillsboro, I was under the impression that I would be merely observing a kosher slaughter for the purpose of this article. Eliyahu had other plans. He asked me if I would participate! After a moment’s hesitation, and with my manhood clearly on the line, I said yes!

The weather that morning was what my mom used to call “raw.” A deep, bone-chilling cold hung in the late-winter air. A couple of farmhands led Billy the ram to a small field, where we laid the animal down on its back. I held the rear legs, while one of the farmhands held the forelegs. Eliyahu snipped the dark brown fur away from the animal’s neck. He examined the knife a final time and almost under his breath recited the prayer just before the incision was made. To be a kosher cut, the shochet must cut cleanly through the trachea and esophagus. The cut was made, and the head was turned to allow the blood to drain out of the neck. The ram exhaled a final breath in a cloud of condensation and kicked one final reflex kick.

An examination found no defects in the lung or other organs, so the meat was kosher! Eliyahu skins and butchers the animal himself. He has a large freezer at home for the meat he brings home.

Eliyahu describes the moment of the kill as a moment of intense awareness. “Clarity of perception through the prism of the laws enables one to know if the shechita is kosher.” There is also a humbling sense of responsibility. “This animal gave its life for you. You had better do something positive with the energy you get from eating that animal. You better perform a mitzvah.”

Eliyahu has consulted with renowned animal rights activist Temple Grandin on keeping the animal calm prior to slaughter. She gave him the following advice: “You should do what keeps the cow calm. It is important that it does not see a lot of movement. You may be interested to read my book Thinking in Pictures. In two chapters, I discuss kosher slaughter.” Grandin has helped to move kosher slaughter into the 21st century by devising advances in animal restraints that hold an animal calmly in place for the shechita.

Today shechita is under assault across Europe as animal rights activists have carried out successful lobbying campaigns that have resulted in shechita being banned in countries such as Sweden, Norway and Denmark.

Yet in the end, the shochet with the sharpest knife often has the kindest heart. Writing in the forward of her book, Grandin stated, “If the cut is made correctly and the knife has no nicks the animal feels little or no pain.”

We live in an age when so many of us are so utterly disconnected from our food supply. Learning about and experiencing shechita with Eliyahu has provided me with much food for thought.