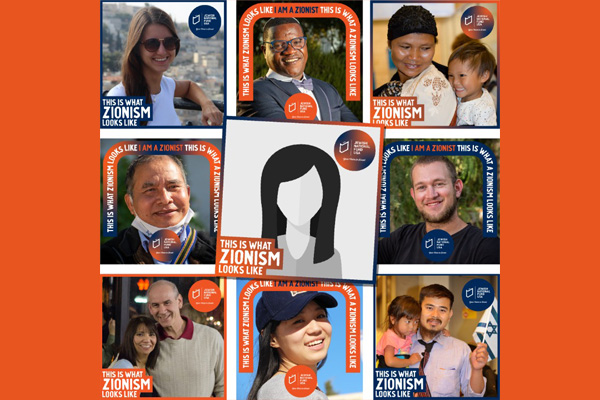 Decades after the U.N. General Assembly passed Resolution 3379, which declared Zionism was a form of racism, Zionists continue to be maligned on college campuses, social media, and city streets. Confronting the ongoing hostility toward Zionism in a positive, multifaceted way, Jewish National Fund-USA (JNF-USA) launched “This is What Zionism Looks Like,” a campaign that features a website, social media strategy, online events, boot camps, and educational courses, designed with the aim of celebrating Zionism and reclaiming what Zionism really means.

“The word ‘Zionism’ has been hijacked from us,” said JNF-USA CEO Russell F. Robinson. “We can no longer allow others to define it for us; we need to own our own narrative. At Jewish National Fund-USA, we decided to tackle this head on, not to attack the attackers—that is what other people do—rather to talk about the beauty, the substance, the building, the commonality that Zionism brings. Zionism is a reclaiming of our ancestral soil and a building of our people together. It is a beautiful thing, and we shouldn’t be ashamed of it.”

The campaign also invites people from across the globe to join in the conversation about the many facets of Zionists during biweekly one-on-one conversations and moderated panels. Guests participating in these discussions will include Zionist historian and activist Gil Troy, human rights attorney Arsen Ostrovsky, and Zionist activist and author of the Almost Jewish blog, Virag Gulyas. Panels will explore topics including, “Can You be Progressive and be a Zionist?” and the “Textures of the Jewish World.”

“It excites me that a significant organization is willing to acknowledge that Zionism is an issue that needs to be addressed and is not just focusing on its own specific work,” said Shahar Azani, senior vice president at the Jewish Broadcasting Service and a former official in the Israeli foreign ministry. “I love this global perspective and am hoping a lot of people will join because Zionism is a value shared by all of us, is important to all of us, and we can’t allow our children to be called Zionist like it’s a slur. That is just unacceptable.

“It’s time people start seeing Israel for what it is: an amazingly small country, a sliver of land in the Middle East that is busy going out there and changing people’s lives in Africa, in South America, in Asia, for the better,” Azani added.

The series of events titled, “Conversations on Zionism: Reclaiming the Narrative,” launched on July 27, with Robinson in conversation with American presidential historian and Zionist activist Gil Troy, author of the influential 2001 essay, “Why I Am a Zionist.” Click here to view the recording.

JNF-USA launched the campaign in conjunction with a significant fundraising effort for its World Zionist Village, a 21-acre, $350 million center for community, learning and love of Israel that will be built in Be’er Sheva, Israel and is expected to open in 2025. The Village will bring together high school students from Barcelona to Alabama; college kids from the United States on a gap year; adults looking for more Zionist education; and more.

The Village will also house a hotel and a conference center, which community groups and tours of all faiths from around the world will be able to utilize.

“It’s going to have an ecosystem, a Zionist ecosystem that is going to cause a new conversation, a conversation that is based on shared values and common destiny, not on right or left, religious or non-religious, or Diaspora or Israel,” Robinson said.

Vivian Grossman, JNF-USA’s National Vice President of Marketing, is helping organize the Conversations on Zionism discussions, and is one of the thousands of people who have taken their picture and posted it to social media as part of JNF-USA’s new campaign.

Grossman became involved with JNF-USA 12 years ago, and hasn’t looked back since.

“I realized I needed to do everything to make Israel stay strong,” she said. “In order for the Diaspora to stay strong we need a strong Israel, and it was apparent to me that Israel staying strong was what JNF-USA is about.”