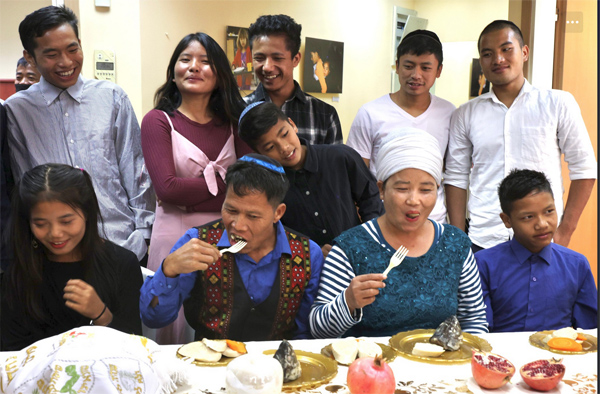 More than 500 Bnei Menashe immigrants from India, descendants of a lost tribe of Israel who made aliyah over the past year, are gearing up for their first Rosh Hashanah in the Jewish state. The immigrants, some of whom are currently residing in Shavei Israel’s absorption center in Achziv, moved to Israel from Manipur, India, thanks to the efforts of Pnina Tamano Shata, Minister of Aliyah and Integration, the Jerusalem-based nonprofit Shavei Israel, and the Jewish Agency.

Part of the Bnei Menashe’s preparations for the High Holidays included a gefilte fish tasting – a traditional dish associated with the Jewish New Year. Shavei Israel, which has lobbied for the Aliyah of the Bnei Menashe community for the past 20 years, presented the dish to the community members for the first time. Some loved the dish, while others politely declared it to be “an acquired taste.”

“After 2,700 years of exile, the descendants of the Bnei Menashe are finally returning to their ancestral homeland,” says Michael Freund, Founder and Chairman of Shavei Israel. “There is no better time for them to begin their new lives in the land of their ancestors than the beginning of the Jewish New Year. The history of this special community, which preserved its connection to the people of Israel and the Land of Israel down through the generations, is exciting and inspiring, and I would like to wish each of them a Shanah Tova U’metuka, a good and sweet New Year, for the first time in their ancestral homeland.”

The Bnei Menashe, or sons of Manasseh claim descent from one of the Ten Lost Tribes of Israel, which were sent into exile by the Assyrian Empire more than 27 centuries ago. Their ancestors wandered through Central Asia and the Far East for centuries before settling in what is now northeastern India, along the borders of Burma and Bangladesh. Throughout their sojourn in exile, the Bnei Menashe continued to practice Judaism just as their ancestors did, including observing the Sabbath, keeping kosher, celebrating the festivals and following the laws of family purity. They continued to nourish the dream of one day returning to the land of their forefathers, the Land of Israel.

Thus far, Shavei Israel has made the dream of Aliyah, immigration to Israel, possible for over 4,500 Bnei Menashe and plans to help bring more members of the community to Israel. Currently, there are 6,000 Bnei Menashe awaiting their return to the Jewish homeland.