PHOTO: Benjamin Olshin with the Babies With Books cart at Randall Children’s Hospital. Benjamin will receive the Youth in Philanthropy award Nov. 12 from the Association of Fundraising Professionals. At age 14, Benjamin founded the nonprofit Babies With Books.

The Jewish community will be well represented when the Oregon and SW Washington chapter of the Association of Fundraising Professionals holds an annual philanthropy awards lunch Nov. 12. The B’nai Brith Men’s Camp Association has been selected as the 2019 Outstanding Volunteer Group, and local teen and Congregation Beth Israel member Benjamin Olshin has been selected as the recipient of AFP’s Youth in Philanthropy award. (See lunch and ticket information at bottom of post)

“The November 12th lunch is a huge event, about 600 peopleat the Hilton, and corresponds to a celebration of National Philanthropy Day,” says Oregon Jewish Community Foundation President and CEO Julie Diamond. “The Oregon and SW Washington chapter of the Association of Fundraising Professionals holds this annual philanthropy awards lunch each fall and OJCF is thrilled … to see the work of Men’s Camp and Ben Olshin recognized by the local philanthropy community.”

The Outstanding Volunteer Group award recognizes that volunteers are the lifeblood of philanthropy. They start, support and/or enhance the programs and services that organizations provide. They often make the difference in an organization being able to serve its community, expand its services to a wider audience or move its programs to a higher level of service to the community.

The philanthropic influence of B’nai Brith Men’s Camp Association reaches back nearly 90 years. Since the summer of 1931, the volunteers of BBMCA have gathered during the third week of August for “Men’s Camp” to raise funds to support B’nai B’rith Camp, a primarily Jewish overnight camp located on beautiful Devil’s Lake outside of Lincoln City, OR. 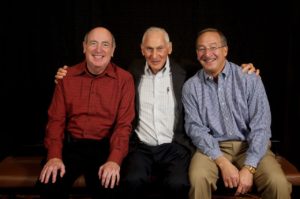 BBMCA’s influence goes far beyond the grounds of BB Camp. BBMCA spearheaded an incentive grant for first time campers that has increased BB Camp’s enrollment in overnight camp by more than 70% in the past decade. This model was adopted by the Foundation for Jewish Camp and is now used by more than 200 Jewish summer camps in North America.

The group’s philanthropy also extends into the Lincoln County community. When BBMCA leaders learned in 2006 that a majority of local children from low-income families didn’t have access to summer programs, they funded a day camp for local youth with full scholarships available. Since then, more than 2,000 day campers have attended the camp and enjoyed the zipline and ropes course, heated pool, hydro-tubing on Devil’s Lake, arts and crafts, plus dedicated staff who model self-confidence and inspire leadership. BB Camp has become a partner in the Youth Development Coalition of Lincoln County, which recently received a grant to fund a reading specialist at camp. BB Camp also received grants from Oregon Department of Education to establish off-site summer meal delivery at multiple low-income housing communities for Lincoln County youth.

One result of the day camp are the touching, real-life stories of children who live in poverty – some in their family’s car – but found their confidence at BB Day Camp and some were inspired to attend college.

Soon after taking over the leadership, Kyle and Irving negotiated the sale of BB Camp in 2009 from the Mittleman Jewish Community Center and started a subsidiary organization to run the camp program. They soon launched a 10-year Second Century Capital Campaign to completely rebuild the camp by the 100th Anniversary in 2021. To date, $10.8 million toward the overall goal of $13.3 million has been raised.

The Youth in Philanthropy award celebrates the future by recognizing young people who have dedicated themselves to improve the community and increase opportunities for others through direct financial support, development of charitable programs, volunteering and leadership in philanthropy. 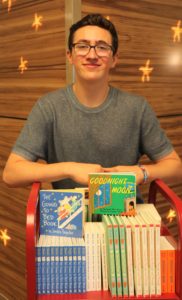 Benjamin Olshin, 16, believes in the power of literacy to transform young lives – even the lives of infants.

When he was in middle school, Benjamin volunteered for a nonprofit that provides free books to low-income children. He quickly discovered the correlation between early literacy and school and social success. He learned that babies in Neonatal Intensive Care Units have higher rates of deficits in speech and language development, but that reading, talking and singing with NICU babies supports their speech and language development.

He engaged a team of peers who curate a book cart with titles in various languages for families to read to their infants and then take the books home. Team members talk with families about the importance of reading to their babies. Benjamin and his team of mostly youth volunteers developed this significant program that helps families and their infants. For more information on Babies With Books, visit their website at babieswithbooks.org

Benjamin is the son of Andrew Olshin and Rebecca Mischel. The family are members of Congregation Beth Israel.

In addition to his work with Babies with Books, for his bar mitzvah service project Benjamin created, fundraised for and led a local food pantry that provided fresh produce and other nutritious foods at no cost to Portlanders experiencing food insecurity. He also served as a peer tutor with CBI at NW Towers, a low-income housing facility near the congregation.

In high school, Benjamin has engaged in the L’Taken social action learning program in Washington, DC, with CBI and serves as the social action vice president for CBI’s youth group, PARTY. Benjamin is a co-leader of Catlin Gabel School’s Jewish Student Union and is an active leader of J-serve. Benjamin enjoys and finds meaning working towards Tikkun Olam and engaging others in this pursuit.

The awards lunch will be held at the Portland Hilton on Nov. 12 from 11:30 am to 1:30 pm. Tickets for the luncheon are $60 for AFP members and $85 for nonmembers. Ticket prices increase to $75 and $100, respectively, after Oct. 11. Tickets are available for purchase via AFP’s website by CLICKING HERE.