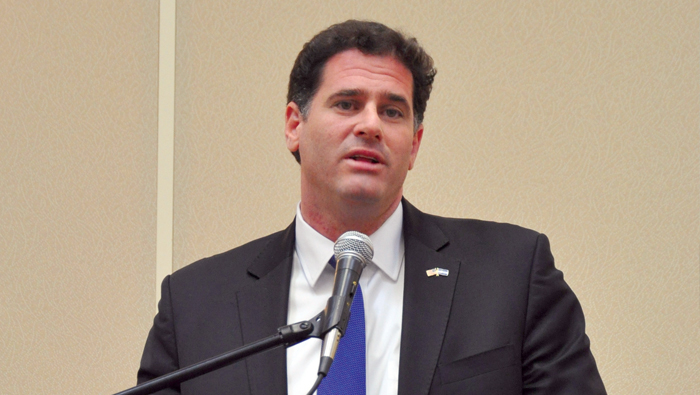 Speaking in Portland on the challenges facing Israel today, Israel’s ambassador to the United States emphasized that growing global anti-Semitism threatens not just Israel but Jewish communities around the world.

In the first visit of an Israeli ambassador to Oregon in 28 years, Ambassador Ron Dermer spoke to an invitation-only crowd of about 180 people at the Mittleman Jewish Community Center March 30.

He spoke briefly about challenges specific to Israel, but focused much of his talk on the rise of global anti-Semitism and its latest form where anti-Semitism is directed against the Jewish state.

“Now the Jewish state is treated differently,” Dermer said, noting it is important to differentiate between legitimate criticism and anti-Semitism. “Israel is not above criticism. Israel is not a perfect country – no country is.”

To help differentiate between the two, Dermer and his mentor of many years, Natan Sharansky, created a 3-D standard: demonization, double standard and denial of Israel’s right to exist.

“If you are a Jewish or Palestinian group, it is not wrong for you to focus on Israel,” he said, noting both have a vested interest. But when other groups want to discuss BDS, he asks if they have boycotted Iran, Syria, North Korea or any of the other 50 or so countries with human rights violations. If they do boycott other nations to support their values, he is willing to engage them. For those groups, he said it is up to him to persuade them that Israel does not belong on their list.

“But when a country or organization boycotts only Israel … they have to defend (their actions) and tell me why they have decided to single out Israel among all the nations of the world for boycott.”

Portland’s Jewish community will have the opportunity to take a stand on that issue in May and again in June. Two church groups will be in Portland for their national conventions, during which they will consider BDS resolutions against Israel.

Dermer said when Christian churches call for such action, it is hard to reconcile with the reality in the Middle East, where ancient Christian communities are being decimated and Christians are being beheaded. The Christian population has fallen from 20% of the region’s people to just 4% over the last century.

“There is one country (in the region) where Christians are free and safe, and that is the state of Israel,” he said. “But Christian church groups are going to call for divestment. The Methodists are here in May … in June the Presbyterians are marching to town.”

The Methodist General Conference will be in Portland May 10-20, and the Presbyterian Church (U.S.A.) General Assembly is here June 18-25.

“I hope when a church group comes to Portland and people at the conference place what I regard as a yellow star on the Jewish state of Israel … I hope people would respond by raising a blue and white star,” he said. “Have such a showing that you will deter groups from thinking they can get away with anti-Semitism.”

Noting the FBI reported that 58% of hate crimes in 2014 were anti-Jewish, Dermer said hate groups behind those crimes need to see “a strong, proud Jewish community.”

He pointed to many reasons to be proud of Israel. Israel’s technological innovations are transforming the world with advances in agriculture that help African nations feed their people, while new drugs and new medical techniques are saving and improving lives around the world.

Though Israel’s soldiers are widely demonized, Dermer said, “No military has done more to protect the civilians of their enemies.”

When Dermer meets with ambassadors from other countries, he asks them how many lives they think have been lost in the history of the Israeli-Palestinian conflict dating back to 1920. He said he gets estimates as high as 2 million and the lowest he’s heard is 250,000. In reality, only 20,000 Israelis and Palestinians have lost their lives in nearly a century of conflict.

“Israel is not perfect, we make mistakes,” he said. “But when a soldier makes a mistake, they are judged.”

Dermer also spoke briefly about Israel’s greatest existential threat – Iran’s goal to “obliterate Israel,” both through its efforts to develop nuclear weapons and through its support of a web of terrorist organizations encircling Israel. The topic came up again at the end of his talk when he was asked his views regarding comments that President Obama is not Israel’s friend, particularly in the face of the Iran deal brokered by his administration.

Dermer responded by saying, “There has never been an administration in history that Israel has not had disagreements with.” Despite the many differences with administrations since Israel’s founding, “We have no better ally in the world than the United States of America, and I believe America has no better ally than Israel.”

On the Iran deal, Dermer said, “We disagree on this issue, but when the president says he believes it is better for the American people and Israel, I believe he is being sincere. I believe he is wrong, but sincere.”

“We have disagreed on the best way to advance peace … but the president has supported Israel on very important occasions,” said the ambassador. “The president has done many things for Israel that are known, many that are not known and many that will never be known.”