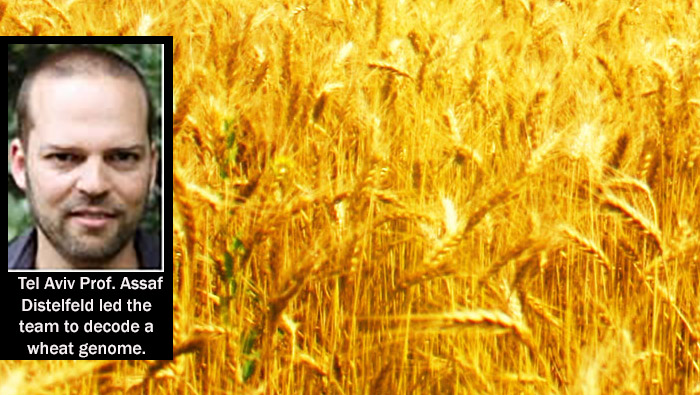 A global team of researchers has published the first-ever Wild Emmer wheat genome sequence in Science magazine. Wild Emmer wheat is the original form of nearly all the domesticated wheat in the world, including durum (pasta) and bread wheat. Wild emmer is too low-yielding to be of use to farmers today, but it contains many attractive characteristics that are being used by plant breeders to improve wheat.

The study was led by Dr. Assaf Distelfeld of Tel Aviv University’s School of Plant Sciences and Food Security and Institute for Cereal Crops Improvement, in collaboration with several dozen scientists from institutions around the world and an Israel-based company, NRGene, which developed the bioinformatics technology that accelerated the research.

“From a biological and historical viewpoint, we have created a ‘time tunnel’ we can use to examine wheat from before the origins of agriculture,” said Dr. Distelfeld. “Our comparison to modern wheat has enabled us to identify the precise genes that allowed domestication — the transition from wheat grown in the wild to modern day varieties. While the seeds of wild wheat readily fall off the plant and scatter, a change in two genes meant that in domesticated wheat, the seeds remained attached to the stalk; it is this trait that enabled humans to harvest wheat.”

“This new resource allowed us to identify a number of other genes controlling main traits that were selected by early humans during wheat domestication and that served as foundation for developing modern wheat cultivars,” said Dr. Eduard Akhunov of Kansas State University. “These genes provide invaluable resource for empowering future breeding efforts. Wild Emmer is known as a source of novel variation that can help to improve the nutritional quality of grain as well as tolerance to diseases and water-limiting conditions.”

“This research is a synergistic partnership among public and private entities,” said Dr. Daniel Chamovitz, Dean of TAU’s George S. Wise Faculty of Life Sciences, who was also involved in the research. “Ultimately, this research will have a significant impact on global food security.”

“Our ability to generate the Wild Emmer wheat genome sequence so rapidly is a huge step forward in genomic research,” said Dr. Curtis Pozniak from the University of Saskatchewan, a project team member and Chair of the Canadian Ministry of Agriculture Strategic Research Program. “Wheat accounts for almost 20% of the calories humans consume worldwide, so a strong focus on improving the yield and quality of wheat is essential for our future food supply.”

“The wheat genome is much more complex than most of the other crops and has a genome three times the size of a human genome.” said Dr. Gil Ronen, NRGene’s CEO. “Still, the computational technology we developed has allowed us to quickly assemble the very large and complex genome found in Wild Emmer’s 14 chromosomes, to a standard never achieved before in genomic studies.”

For the first time, the sequences of the 14 chromosomes of wild emmer wheat are collapsed into a refined order, thanks to additional technology that utilizes DNA and protein links. “It was originally tested in humans and recently demonstrated in barley, both of which have smaller genomes than Wild Emmer wheat,” says Dr. Nils Stein, the Head of Genomics of Genetic Resources at Leibniz Institute of Plant Genetics and Crop Plant Research in Germany. “These innovative technologies have changed the game in assembling the large cereal genomes.”

“This sequencing approach used for Wild Emmer wheat is unprecedented and has paved the way to sequence durum wheat (the domesticated form of Wild Emmer). Now we can better understand how humanity transformed this wild plant into a modern, high-yielding durum wheat,” said Dr. Luigi Cattivelli, coauthor of the work and coordinator of the International Durum Wheat Genome Sequencing Consortium.

“We now have the tools to study crops directly and to make and apply our discoveries more efficiently than ever before,” concluded Dr. Distelfeld.

NRGene is a genomic big data company developing cutting-edge software and algorithms to reveal the complexity and diversity of crop plants, animals, and aquatic organisms for supporting the most advanced and sophisticated breeding programs. NRGene tools have already been employed by some of the leading seed companies worldwide as well as the most influential research teams in academia. www.nrgene.com.