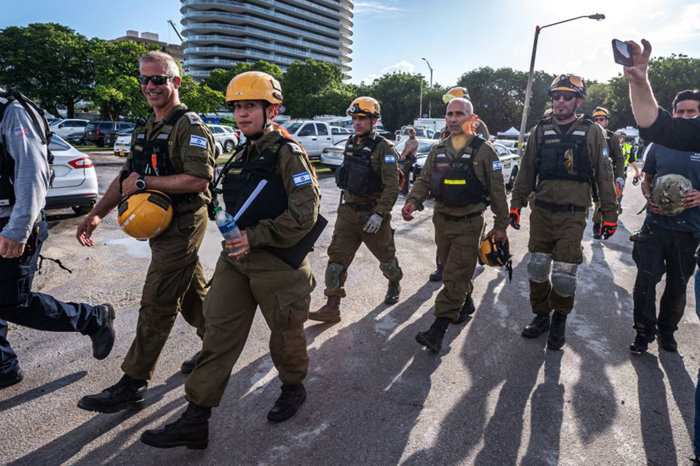 Photo: Members of the Israel Rescuers delegation gather upon their arrival in the area near the partially collapsed 12-story Champlain Towers South condo building in the city of Surfside, Florida, on June 27, 2021. (Giorgio Viera/AFP via Getty Images/TNS)

Just 72 hours after part of an oceanfront condo collapsed in Surfside, members of the Homefront Command of the Israel Defense Forces were on their way to assist search and rescue efforts.

Not only did they bring physics and engineering specialists to expertly dig through rubble, but they also offered tools to help families cope with unprecedented trauma of what may be the deadliest accidental building collapse in American history.

Yuval Klein, an officer in the search and rescue unit of the Israel Defense Forces, told the Miami Herald that his team contributed several new techniques to the effort, including conducting extremely detailed interviews with family members of those still missing.

“For example, we would show them a picture of the apartment and would ask, where is the master bedroom situated? Where was the bed inside that room? Where would the person sleep? What direction would their head be?” Klein said. “Did they have any significant objects in the room? Maybe a statue? Maybe a mirror with a gold ring?”

Once this data is incorporated into first responders’ blueprints of apartments, Klein said, it can help rescuers better understand which apartments they are encountering in the rubble, who they are looking for and how many people are missing from that apartment.

But the in-depth interviews also serve another purpose: According to Klein, one of the best methods for helping families cope with trauma is to transform them from “passive” to “active” actors in the process.

By giving rescuers information, drawing apartment plans, working to find photos, mementos or any detail that could help identify apartments, family members are made to “feel like they’re a part of the search.”

“When the person is passive, he’s angry, he’s annoyed, he’s waiting. His mind is full of thoughts, imagining what happened to beloved relatives,” Klein said.

Family members are also given a QR code to scan any relevant photos or documents they find, which immediately get uploaded to a database rescuers can access.

Bal Harbour Mayor Gabriel Groisman said he’s been assisting the Surfside Jewish community by connecting with the various groups that include United Hatzalah — an Israeli group separate from Hatzalah of South Florida — which sent a team to assist with services for survivors and families.

“United Hatzalah is coming from Israel with psychological trauma experts and they’re helping the families, not just the Jewish families, but all the families,” Groisman said.

United Haztalah’s psychotrauma and crisis unit had six responders and one therapy dog on the ground Sunday morning, providing what they call “psychological first aid” to survivors and families still missing loved ones.

The Surfside collapse marks the fourth crisis in the U.S. for which United Hatzalah has arrived on scene to offer their psychological services. The first three were Hurricane Harvey in Houston, Hurricane Irma in Florida, and the Tree of Life Synagogue mass shooting in Pittsburgh in 2018.

Raphael Poch, one of the responders in the unit, said that the team has aided a couple hundred people since their arrival three days ago, and has been working in coordination with the IDF unit to combat families’ sense of powerlessness amid the crisis.

Whether it’s providing information about what color clothing a family member may have been wearing or comparing memories of the apartments to the architectural maps, Poch said that they worked to “give them tasks to do which are important.”

“We’re here to make them feel that someone is with them,” Poch said. For some individuals, he said, that has meant something as simple. But for others who are experiencing an “acute stress reaction,” more “severe tools” have been necessary.

Poch said that United Hatzalah’s arrival was coordinated by the Greater Miami Jewish Federation. The group typically works with victims of mass casualty events in Israel.

The American Red Cross also has volunteers in Surfside who are trained to assist families and survivors in crisis, Ryan Logan, the group’s director of recovery services, told media Tuesday.

Logan said volunteers are working to provide “emotional and psychological resiliency training” to survivors and families of victims. Within three days, Logan said, his group hopes to have locations and times for when those free-of-charge courses will be available.

“This is a great opportunity for folks just to assess themselves, but also learn how to recognize the signs of trauma or the impacts in their own family, as well as how to speak to their children about things like this,” Logan said.