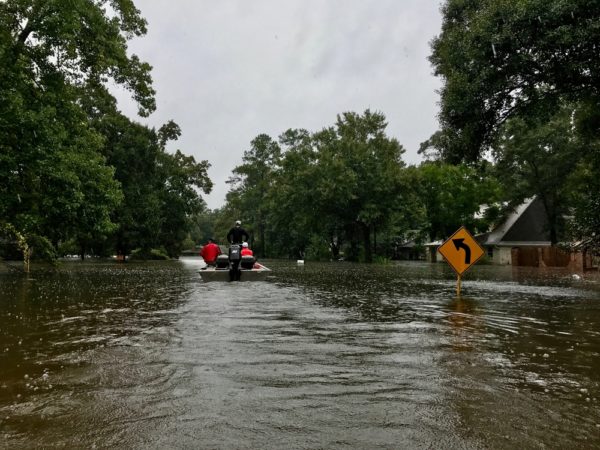 Two teams of Israeli aid experts are on their way to Texas to provide vital relief and psychosocial support to the thousands of people who have lost everything in the catastrophic Tropical Storm Harvey.

The storm, which first hit Texas on Sunday and continues to plague the beleaguered state with pounding rain, has left nine dead, and tens of thousands of people homeless as flood waters have poured through city streets in Houston, the fourth-largest city in the United States. The storm is thought to have affected 6.8 million people in 18 counties, a quarter of the Texas population.

Humanitarian aid organization IsraAID aims to provide a two-stage response to the disaster, focusing on helping remove debris and clean homes in the wake of the catastrophic flooding, and offering psychosocial trauma support to shocked residents.

“For the most vulnerable groups, notably children and the elderly, time is of critical importance; the longer these groups are forced to remain in shelters, the higher the chance of long-term mental health problems such as Post Traumatic Stress Disorder (PTSD), a disorder that can have a debilitating and long-term impact.”

iAID, an international aid organization based in Israel, is also sending a team of 9-10 Israeli relief professionals to offer support to the national guard and other non-governmental American aid groups, to help families and communities affected by the storm.

IsraAID, which is working closely with Jewish communities, the local government in Texas, and the Israeli Consul General, plans to deploy 5-7 experts from both Israel and the US, to offer psychological support to vulnerable population groups evacuated to shelters in Austin and Dallas.

They will create and facilitate child-friendly spaces within the shelters to help support homeless children, and offer psychological and emotional support and tools for both individuals and for community resilience building.

The organization will also send a relief team to help local communities remove debris, clean out destroyed homes and help residents sift through the wreckage of former homes to salvage belongings.

“This cleaning stage is crucial to avoid major health and hygiene issues from contaminated water and open sewage,” said Polizer. “From a psychological perspective, home owners are often so overwhelmed by the devastation and the loss of their belongings that they cannot consider the thought of filtering through their possessions to try and save anything. Part of IsraAID’s work is to separate what can be preserved.

“The loss of people’s homes can easily put them into a downward spiral of despair and depression. Cleaning up the mess helps create a positive momentum towards rehabilitation and recovery,” Polizer added.

IsraAID announced it will prioritize those who do not have insurance or the financial means to clear the debris, and those who are unable to clean up their homes for other reasons.

This is not the first time that IsraAID has offered aid to Texas or the US. The organization, which has provided aid to 41 countries over the last decade, flew a seven man relief team to Wimberley, Texas, in May 2015, when the area was ravaged by floods.

IsraAID has also sent disaster relief to the US following floods in Louisiana, the Carolinas, Denver and Detroit, hurricanes in Oklahoma, New York and New Orleans, and wildfires in Washington.

'Israel sends aid to flood-battered Texas' has no comments