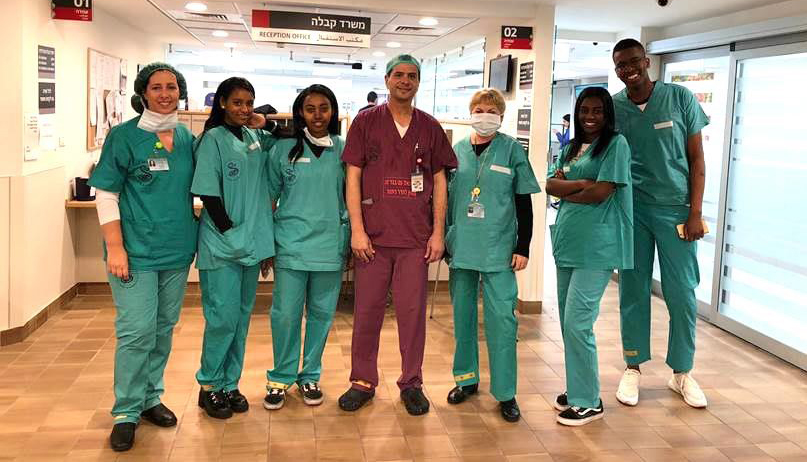 Photo: Students and staff of the Arrow Project on a tour of Sheba. In the center: Prof. Katorza. Yair Jalmar is at the far right.

The growing protests against racism in the United States have aroused strong feelings across the globe, and Israel is no exception. Ethiopian Israelis have long complained of prejudice and being treated as second-class citizens.

Sheba Medical Center, Israel’s national hospital, enjoys a reputation for medical innovation. Still many are unaware that it is also at the forefront of social integration among various minority groups in Israel.

In the past several years, Sheba has integrated hundreds of new Ethiopian olim into the hospital workforce, going as far as to provide them with free classes to help them navigate Israeli bureaucracy and improve their language skills.

Most recently, Prof. Eldad Katorza, senior physician at Sheba and director of the Arrow Project, decided to give youth from the Ethiopian community a head start by incorporating them into a pilot program within his Arrow Project.

Project Arrow (chetz in Hebrew, the initials of chokrim tze’irim, meaning “young researchers”) is an apprenticeship program for medical students. It is designed to pave their way into the world of medical research. Established in 2006, this revolutionary initiative matches selected medical students with experienced researchers who serve as their mentors. During once- or twice-weekly meetings, the student-mentor teams work through every stage of medical research, from formulating the initial question, to collecting and analyzing data, to presenting the results at medical conferences.

This year, for the first time, each research duo also included a third tier: high school students from the Ethiopian community.

Katorza believes in the importance of encouraging students to pursue research, noting that they do not receive sufficient exposure to research thinking or methodology in medical school. “I believe that research makes a doctor more knowledgeable, more curious, more creative. A doctor who engages in research is a much better doctor!” Employing this premise, Prof. Katorza is now planning to open several slots for nursing school students in the coming year’s program. “Nursing is also a field that stands to benefit greatly from adding researching to its ranks; it will raise the bar of nursing in Israel,” he says.

In the early stages of planning the pilot program for the Ethiopian high school students, it quickly became evident to Katorza how crucial, timely – and challenging – his initiative was. “I asked my son, then in 11th grade, to look around his school in Givatayim for students from the Ethiopian community who might be suitable for the program,” says Prof. Katorza. “As it turned out, there wasn’t a single Ethiopian student in his school, nor any of the good schools in the area.”

The reason can be traced to the socioeconomic realities in Israel today. By and large, members of the Ethiopian community tend to dwell together in more impoverished neighborhoods where community services, schools included, are on a lower level. These conditions put Ethiopian teens at a disadvantage from the outset. Due to economic necessity, the youth are pushed to join the workforce at an early age, further perpetuating a cycle of poverty.

“Almost four decades have passed since the first wave of Ethiopian Aliyah,” observes Katorza, “yet judging from their rate of participation in academia, their level of affluence and other markers of social mobility, it appears that the government has failed to take the necessary steps to help them bridge the gaps and facilitate their successful absorption into mainstream Israeli society.”

Anxious to change this negative trend, Katorza decided to include outstanding students from the Ethiopian community in the Arrow Project.

Good intentions aside, it wasn’t simple to locate high school students from the Ethiopian sector who met the criteria for participation in the program: high marks in the sciences, high motivation and interest, and living near enough to the Sheba campus to be able to attend the weekly meetings easily. Ultimately, Katorza was aided by an organization called Fidel (“alphabet” in Amharic), promoting the education and social integration of Ethiopian-Israeli youth. The Fidel staff welcomed this opportunity to incorporate Ethiopian students in Sheba’s research-mentoring platform and provided 10 candidates, from which the top five were chosen.

According to Prof. Katorza, the pilot was a resounding success and will be repeated in the coming year. “We found that once they are freed from the limitations of their environment, the students manifested amazing capabilities. We endeavored to help build their self-confidence, empower them, and teach them that they can do anything they put their mind to.”

Throughout the year, in addition to their full participation in research, the Ethiopian high-schoolers were also exposed to the exciting clinical activity at the hospital. “At the beginning of the year, the students didn’t have any specific plans for the future,” Katorza says. “Now, they are now seriously considering a medical career.”

One of those is Yair Jalmar, 17, from Beer Yaakov, who participated in a research project with pediatric cardiologist Dr. Shai Tejman. “This project helped me develop my interest in medicine and learn more about the advanced technologies and devices as well as the various departments in the medical field,” he says.

In the 14 years since the project’s inception, the pool of participants, which in the beginning included only students from Tel Aviv University Sackler School of Medicine, has expanded to foreign exchange students from New York and London, as well as medical students from Ariel University, Bar Ilan and more. Thus far, former participants in the Arrow Project have published their findings in prestigious medical journals, and several have joined the outstanding team at Sheba.

To find out more about the Arrow Project, visit eng.sheba.co.il/ny_arrow_project.