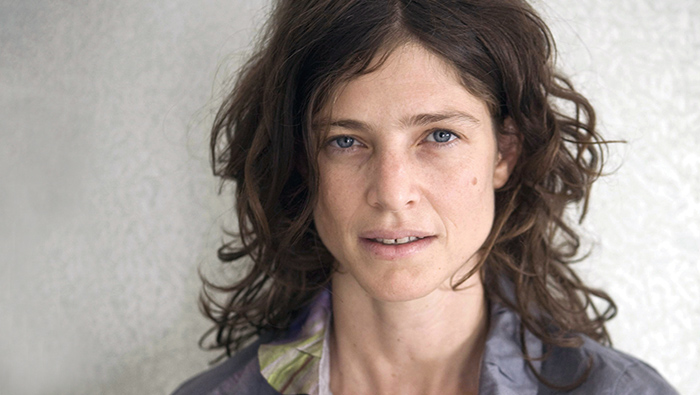 “Dance chose me – I could not not do it,” says Israeli dancer, choreographer and teacher Iris Erez, 45, who arrives in Portland this month for a five-month residency at Reed College.

Iris is one of 19 Israeli artists visiting the United States this school year to participate in residencies through the Schusterman Visiting Israeli Artists Program, an initiative of the D.C.-based Israel Institute. Iris performs her own work in Israel and abroad, and has served as curator for the Jerusalem Modern Dance Festival.

As a child Iris dreamed of being a dancer, but after her compulsory army service, she decided to study psychology and work as a dance therapist. She continued to dance part time, but when she was 28 she realized dance, not dance therapy, was her calling.

She wanted to dance herself and to teach others to dance – perhaps even to soar. “I like teaching (college age) students,” she says. “They are searching for something that will catch their curiosity and creativity. They chose to be here. I feel I can take them with me.”

In Portland she will teach dance technique and choreography at Reed using her extensive experience from having taught at the Jerusalem Academy of Music and Dance, the School of Visual Theatre, Kibbutzim College, Bezalel Academy of Art and Design, Hakvutza School for Contemporary Dance and Haifa University. She also will present a public performance of her latest solo work. “A lot of exciting choreography is coming out of Israel,” says Carla Mann, a dance professor at Reed, where a major in dance was implemented in fall 2016.

Portland State University Associate Professor Nina Spiegel, who wrote her dissertation on Israeli dance, is looking forward to bringing Iris to PSU for a program. Iris will present a public lecture with accompanying videos in late February (see calendar in the February issue of Oregon Jewish Life for details). Nina’s dissertation grew into the 2013 book Embodying Hebrew Culture: Aesthetics, Athletics, and Dance in the Jewish Community of Mandate Palestine. In the book’s conclusion she explores why connection to the land and the appearance of strength, which evolved in pre-state Israel, remain important in contemporary society.

“Israeli choreographers are tremendously creative and very innovative at pushing boundaries,” says Nina. “Vigorousness, strength and technical excellency is part of Israel’s contemporary dance scene. Many in the dance world look to Israel to see what is coming out.”

When Iris turned to dance as a profession in 1999, she was older than many people beginning a contemporary dance career. Most dancers are 18 to 21 when they audition for the internationally renowned Batsheva Dance Company (which has performed in Portland at White Bird), where many Israeli choreographers get their start. Iris says Batsheva’s Ohad Naharin once asked her why she never auditioned there, and she told him she was too old. Nowadays she says the two admire each other’s work.

Israeli contemporary dance was becoming a hotbed of creativity in those years.

Iris quickly immersed herself in the innovations. She joined Yasmeen Godder in Yasmeen’s first year back in Israel after performing in New York City for several years. The decision was momentous.

“Yasmeen was crucial for me,” says Iris. “Her work connected to dance therapy working from an emotional state. She looks at how the psyche and physical connect.”

She says the release technique that Yasmeen developed opened her “to dance from a big space.”

“We had a very great dialogue together,” says Iris. “I had the chance to do many things and to grow with her.”

Iris says “e-motion” is the essence of her approach to dance.

“Emotions move us and every motion has an emotion in it,” she explains. “Dance is happening in you; it is not static, it shivers inside of you.”

She says the English expression “It moves me” is what she looks for when she dances or choreographs a new work.

A theme that often moves her to create a new piece is the concept of space.

“I find myself concerned with the space around us and where we live,” says Iris. “I try to figure out my identity concerning where I am.”

For Israeli artists, Iris says deciding whether or not to address the political situation there is difficult. But even avoiding the topic is addressing it, she notes: “It invades everything and it’s important that it does.”

“It is important to think about the place I live and to state the feelings about what’s going on with me in this place,” she says

Her partner in life is Elad Vazana, who also is deeply involved in space and relationships. He works as both a tour guide and a facilitator of cross-cultural dialogue. “I’ve devoted my life to connecting people from diverse backgrounds and cultures and to remembering that the ‘other’ is a human being whose story is rich and as complex, like ours,” he writes on his website. “A turning point in my dedication and ability to help people engage was the 2006 Palestinian-Jewish Family Peacemakers Camp in California.”

The interaction of people and their environment was clear in Iris’ 2010 dance “Homesick.” She explored “the space between the familiar and the unfamiliar.” Since “Homesick” is danced on corrugated cardboard, dancers change the material and something happens between the dancers and the space.

When she started work on her latest dance, “Local (not easy),” Iris says Elad gave her an added challenge.

“Elad always has to carry all the stuff – the cardboard for ‘Homesick’ and a lot of technology in the last show,” she explains. “So he said, ‘This is your challenge – only you on stage, not all this heavy stuff I have to carry.”

So “Local (not easy)” – in Hebrew one word has both meanings – is danced without anything. Just Iris in the space.

Another difference between the two dances is that “Homesick” is more dramatic with linear thinking that follows a story from beginning to end, while “Local (not easy)” has excerpts that are associative rather than linear. The new solo work also uses a lot more humor and a lot more words than do most of her works. Those two elements have made it a challenge to translate to English so she can perform it in Portland, but Iris has spent enough time in the United States that she is up to the challenge.

As a child she lived in the United States several times with her two sisters and her parents, Amnon and Ahuva Erez. As an agriculture researcher Amnon’s work often took him to teach in different locations.

As an adult she also performed in New York City each year for five years with Yasmeen Godder’s ensemble.

But she has never been to Oregon and says she and Elad are looking forward to exploring Oregon’s nature with their two sons, Nuri, 5, and Sol, 1½. She says after the intensive fires in Israel this winter, she is especially looking forward to the rain. “People (here) have been praying for rain.”

“I am very curious about the city and its people,” she adds. “We heard so many things about Portland and even saw some funny chapters of ‘Portlandia.’ So we look forward to it.”

Her residency in Portland was instigated by Reed alumna Marge Goldwater, who is the program director of the Schusterman Visiting Israeli Artist Program.

“Iris has a reputation of being one of the finest teachers of dance in Israel, which is why I was eager to bring her and, indeed, have been trying to recruit her for years,” says Marge.

Marge had mentioned the visiting artist program to some faculty members at Reed, who told Carla Mann of the possibility as she was helping launch Reed’s dance major.

“So I talked with Marge about specific students and programs and Reed,” says Carla. “Marge has connections with a number of Israeli choreographers and performers. She does matchmaking to match the right person to the right school.”

Reed dancers learn to create new movement vocabularies and find new perspectives by which to see, question, understand and evaluate the expressive possibilities of the human body moving in space and time.

Since the Reed dance department encourages questioning and seeking in areas such as the use of stage space and the interactions between the audience and dancers, Carla says that Iris seemed like a good fit.

The release technique Iris will teach at Reed is a good fit for Reed’s exploration of “conceiving how the body moves.” Looking at clips of Iris dancing, Carla says, “I enjoy the movement vocabularies she is creating in her work.”

Reed also encourages students to study abroad for a semester or year and tries to bring in visiting teachers to expand students’ world views.

Marge is so pleased that Iris was able to fit the residency into her busy schedule.

“She’s been terribly busy in recent months because she is performing a new work in Jerusalem in two weeks and she has been asked to perform “Homesick” at the International Dance Exposure in early December,” Marge said last fall. “Exposure invites presenters from around the world to look at the work of Israeli choreographers and dancers for four days of nonstop activities.”

For Reed and Iris, Marge has used her matchmaking to truly create a shidduch (match) with wide-ranging benefits. An artist of Iris’ caliber is a rare find and one to celebrate.

With a a BA in psychology and arts and a diploma in dance therapy, Iris won her first dance award while still in college  — in 1995 she won the university campus talent contest. She won the Israeli Minister of Culture, Science and Sports Prize for performing artist in 2001 and then in 2003 won that prize for performing ensemble as part of Yasmeen Godders group. In 2009 she received the Teva Company Grant for creation. In 2010 she won the Kurt Joss prize when she performed the piece “Solo Colores” by Arkadi Zaides. The Bistrizki fund grant for production came her way in 2012.

All in all, her residency portends an auspicious beginning for Reed’s new major in dance.

'Iris Erez brings e-motion to Reed dancers' has no comments