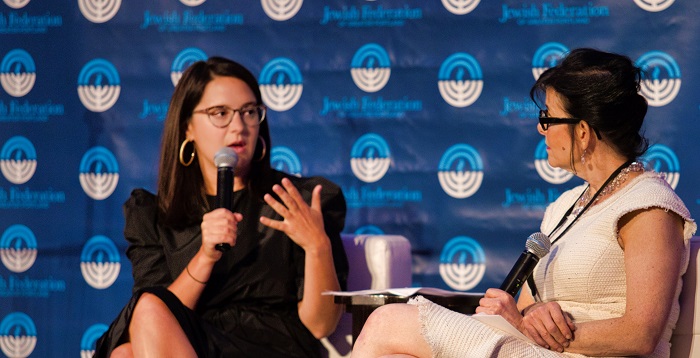 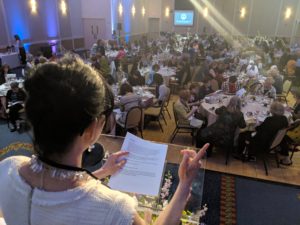 PHOTOS: Above, Kim Rosenberg, right, interviews Bari Weiss at IMPACT. At right, Kim addresses the 250 some women who turned out for the event.

New York Times opinion writer Bari Weiss delivered a powerful message of how we can fight anti-Semitism in this world when she spoke in Portland May 6. Bari addressed more than 250 women at the Jewish Federation of Greater Portland’s Women’s Philanthropy IMPACT event.

Bari Weiss grew up in Pittsburgh and became a bat mitzvah at the Tree of Life Synagogue where the tragic shooting took place last November. From there she provided her thoughts on the threat of anti-Semitism today and what we can do to fight it.

Weiss cited Dara Horn, a scholar of Hebrew and Yiddish literature, and her view that anti-Semitism has two forms. This is what Horne wrote several years ago:

“Of the many varieties of anti-Semitism, or anti-Judaism, that have plagued the Jews over the centuries, two recurrent general patterns can be identified by the holidays that celebrate triumphs over them: Purim anti-Semitism and Hanukkah anti-Semitism. In the Purim version, exemplified by the Persian genocidal decrees in the biblical book of Esther, as well as by more recent ideologies like Nazism and today’s Iran and Hamas, the regime’s goal is unambiguous – Kill all the Jews. In the Hanukkah version, as in the 2nd-century B.C.E. Hellenized Seleucid regime that criminalized all expressions of Judaism, the goal is still to eliminate Jewish civilization. But in the Hanukkah version, this goal could theoretically be accomplished by simply destroying the civilization, while leaving the warm de-Judaized bodies of its former practitioners intact. For this reason, the Hanukkah version of anti-Semitism – whose appearances range from the Spanish Inquisition to the Soviet regime – often employs Jews as its agents. These “converted” Jews openly renounce whatever aspects of their Jewish identity are unacceptable to the relevant regime, proudly declare their loyalty to the ideology of the day, and loudly urge other Jews to follow them. These people are used as cover to demonstrate the good intentions of the regime – which of course isn’t anti-Semitic, but merely requires that its Jews publicly flush thousands of years of Jewish civilization down the toilet in exchange for the prize of not being treated like dirt or murdered. For a few years. Maybe.”

To counter this, Weiss five ways we can fight anti-Semitism today, which is the subject of her forthcoming book:

Bari’s thoughtful comments made a true impact on everyone in the room!

Marc Blattner is the president and CEO of the Jewish Federation of Greater Portland.