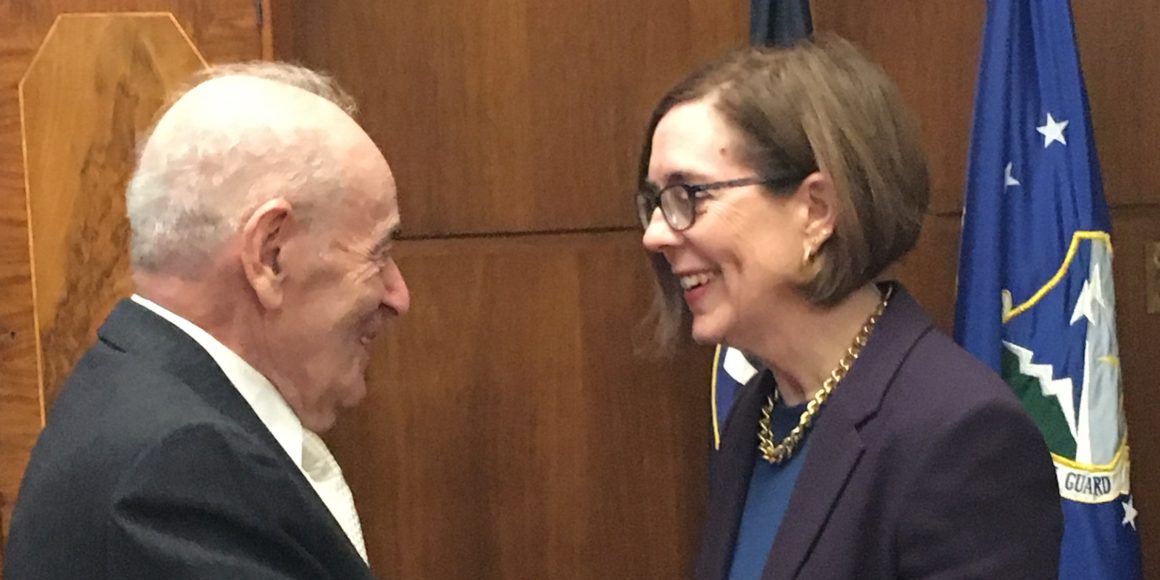 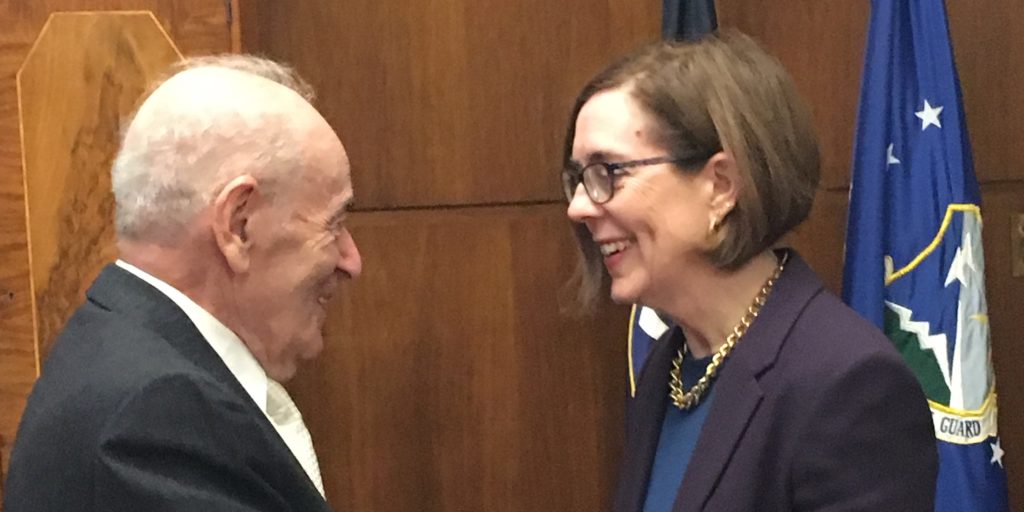 Editor’s Note: Holocaust survivor Alter Weiner was struck by a car and killed in Hillsboro Dec. 11, 2018. 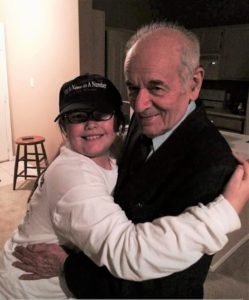 Above, Holocaust survivor Alter Weiner met Claire Sarnowski when she was 9. Now (below) the two have become fast friends and partners in the push to make Oregon the 11th state to mandate Holocaust education.

When Alter Weiner was a teenager during the Holocaust, the Nazis killed his family and his dream for a normal life.

Now Claire Sarnowski, a Lake Oswego teenager inspired by Alter’s story, compassion and kindness, is trying to ensure another dream comes true for the 92-year-old Holocaust survivor. That dream of mandated Holocaust and genocide education now seems more important than ever.

When Alter was 13, the Nazis shot his father and ended his formal education. From age 15 to 18, Alter was in five different camps where he was tortured and starved. He was the only member of his immediate family to survive. After immigrating to the United States, Alter worked days and studied accounting at nights, earning his GED at age 35. He worked as an accountant until age 73, when he moved to Hillsboro.

Soon after he arrived, the Oregon Holocaust Resource Center (now the Oregon Jewish Museum and Center for Holocaust Education) asked him if he would share his story with students and other groups. After his first talk at Century High School in Hillsboro, the teacher sent him 100 letters from students.

Reading those letters, Alter says he realized, “My life story changed their lives for the better.”

Alter has now addressed nearly 900 groups at schools, churches, prisons and other venues. He has received more than 88,000 letters. One was from a seventh-grader considering suicide. “She realized despite all her difficulties, she still was blessed with everything I had 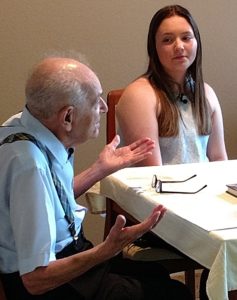 been denied as a teenager. She changed her mind,” he says. Other students who had dropped out of school or considered dropping out, have written Alter that they realized how lucky they were to have the opportunity for an education.

Claire met Alter nearly five years ago when she was in fourth grade. She and her mom, Carol Sarnowski, went to Salem to hear Alter speak at the school where Claire’s aunt, Sue Luft, was teaching. When Sue offered to drive Alter home, Claire rode along so she could speak with the man whose talk at the school had so moved her.

“I asked what he wanted to do before the Holocaust, and he said he wanted to live a normal life and that was taken away from him,” Claire says of her first encounter with the man she now calls her best friend.

“I did find Claire, at the age of 10, to be exceptionally bright, very mature for her age, sensitive and compassionate,” says Alter of their first meeting. “Her keen interest in the Holocaust legacy surprised me and simultaneously pleased me to know that kids at such young age are interested in history, and the Holocaust is indeed an integral part of history.”

Claire bought Alter’s book, From a Name to a Number, and then wrote a review on Amazon that Alter treasures.

He says Claire is his youngest reviewer on Amazon. He is especially moved by her sentence, “He made me think differently about life and the Holocaust.”

When Claire was in middle school, anti-Semitic and racist events at her school and Lake Oswego’s high schools prompted her to email Alter to apologize for the actions of her fellow students. Now a freshman at Lake Ridge High School, she says she has continued to witness prejudice and hatred in the largely white school district where students consistently score well above the state average in statewide tests in math, English and science. Knowledge of history is not tracked on the state’s school report cards.

“There is a lot of racial hatred and cruelty toward certain groups,” says Claire. “I reached out to the school principal to pioneer teaching about the Holocaust and other genocides, so people in my school would learn about these atrocities.”

Her principal introduced her to Lake Oswego School Board Member and Oregon State Senator Rob Wagner. Wagner was able to schedule a hearing before Oregon’s Senate Interim Committee on Education. 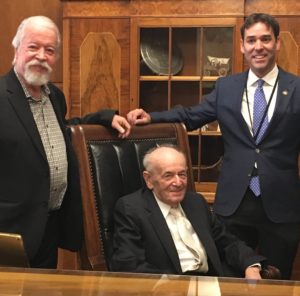 In the video of that Sept. 25 hearing, Wagner tells the committee about the incidents in Lake Oswego high schools including swastikas painted on walls and a poster of Jews being pushed into ovens.

“We are losing our history,” says Wagner. “Some states are stepping up” to ensure students know about the Holocaust and genocides including Rwanda, Kosovo and Myanmar. Ten states now mandate some level of Holocaust and genocide education, and 20 states have developed curricula on those topics.

Wagner doesn’t advocate that the state write a genocide curriculum, but he says when the full Senate returns to session, he does intend to introduce legislation mandating Holocaust and genocide education in the state.

During the hearing, Alter shares his story with the committee, focusing on the impact his speaking has had on students.

“The Holocaust is not just a chapter of history, but a lesson to be more tolerant, more loving and that hatred is eventually self-destructive,” Alter says. “I hope Oregon becomes the 11th state” to mandate Holocaust education.

During her testimony before the committee, Claire frequently breaks into tears. Several members of the committee are visibly moved by the testimony and some can be seen wiping away tears of their own.

Claire urges the committee to support “teaching students the ramifications that come with prejudice of any kind in society.”

Committee Chair Sen. Arnie Roblan briefly speaks about his personal connection with a Holocaust survivor, and after thanking Alter and Claire for their testimony tells them to look for legislation coming.

“I felt my voice made in impact,” says Claire. “I feel honored to perpetuate their legacy and to do all I can to ensure future generations are aware of (them) … and to ensure history doesn’t repeat itself.”