Sen. Wagner guided the bill through the state senate and Rep. Sollman shepherded it through the house of representatives. Photos by Deborah Moon

Senate Bill 664 mandating Holocaust and Genocide Education was ceremonially signed into law the morning of July 15 by Gov. Kate Brown at the Oregon Jewish Museum and Center for Holocaust Education.

“Knowledge is power,” said Gov. Brown to an audience that filled the museum’s auditorium. “We must remember these horrific moments … so we can ensure it never happening again.”

“There is a growing culture of hate and discrimination we must stamp out, and we have to do it together,” she continued. “It is good we have a ray of hope in our country – our state – right now.”

The governor was surrounded by Holocaust survivors and their families, staff from OJMCHE and the Jewish Federation of Greater Portland and others who supported and worked to pass the legislation. 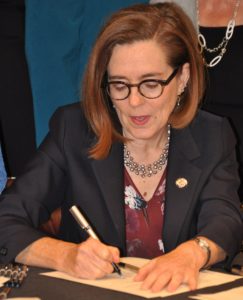 The bill requires school districts across Oregon to provide instruction about the Holocaust and genocide in social studies classes, starting in the 2020-21 school year. Oregon is the 11th state to mandate Holocaust and genocide education. The bill was unanimously passed in a final vote by Oregon House legislators May 28, and signed by Gov. Brown on June 4.

“This is a historic day for Oregon,” said OJMCHE Director Judy Margles welcoming the crowd, noting the museum and survivors have long sought to mandate Holocaust and genocide education. “Jewish history is a prism that refracts and illuminates oppression as it has been variously expressed throughout world history. Holocaust history may speak to a specifically Jewish experience, yet it simultaneously addresses universal issues of injustice and the dangers of denying diversity. The Holocaust was not an isolated event, but rather one of many genocides that continue to happen to the present day.” 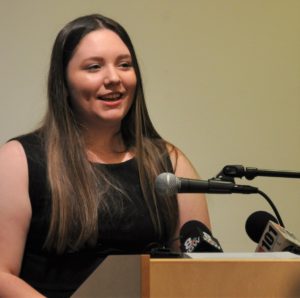 She thanked state Sen. Rob Wagner, who sponsored the bill, and Lakeridge High School freshman Claire Sarnowski, who approached the senator about the issue, “for getting action at this time.”

As a  Lake Oswego School Board member who has four children in public schools, Sen. Wagner said that he has seen “increasing racism and anti-Semitism in our schools.”

Sen. Wagner said that the day after 11 people were killed in a synagogue in Pennsylvania, Gov. Brown reached out to him and offered her support “to make sure this legislation passed.”

“The legislation is important, but now the work begins,” he added, for teachers partnering with nonprofits to create a rich curriculum.

Speaking at the podium before the signing, Claire, 14, explained that her interest in the Holocaust began at age 9 when she heard Holocaust survivor Alter Weiner, z”l,  speak at a school. Alter was struck and killed by a car Dec. 11, 2018, just months after he and Claire testified before the Sept. 25 hearing Wagner scheduled before the Oregon’s Senate Interim Committee on Education.

“I know how Holocaust education impacted my life and I look forward to it impacting other students,” said Claire. 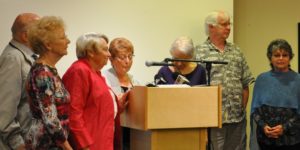 Holocaust survivor Eva Aigner spoke on behalf of herself and other survivors at the event.

OJMCHE’s Survivors Speakers Bureau speaker Eva Aigner spoke on behalf of the survivors who stood with her: “This is a very happy day for all of us … to know that when we are no longer able to share our personal Holocaust experiences, it will continue to be taught in Oregon public schools.” She added that survivors and second generation speakers speak about the millions of lives lost, including members of their own families, and help students see “the consequence of hate” so they “learn to accept differences.”

“Are we going to be bystanders or stand up for the rights of all human beings,” she concluded.

Following the ceremony, attendees toured the Holocaust and Discrimination and Resistance permanent exhibits at OJMCHE. 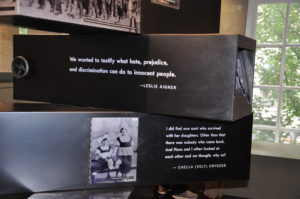 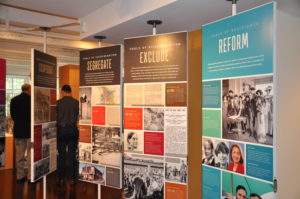