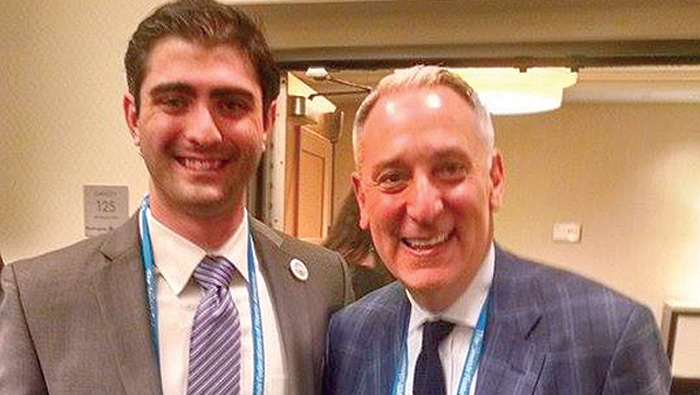 The Jewish Federations of North America General Assembly was the apex of my involvement with Oregon State Hillel. As the only student from Oregon, I was not only able to take part in the Hillel International Scholars program (one of 36 national students chosen by Hillel International to attend), but also to act as a representative of the students from Oregon and the Pacific Northwest. It took me a while to realize the opportunity I had gained from my acceptance, but once I was there the rewards were immeasurable.

I came to the conference in Washington, D.C., with an open mind and a clear set of goals. I wanted to learn what Jewish life on campus is like in more established communities across the nation, what Oregon State Hillel can accomplish for its students, and the steps that we as staff and students can take together to meet our potential. With representatives from every Jewish federation in North America, joined by leadership from other organizations around the world, there was not only space for sharing best practices, but the opportunity to discuss the major challenges facing Jewish life today.

The general assembly taught me the importance of Hillel on the Oregon State campus and the factors that make it such an excellent program. The Oregon Hillel Foundation provides a place for the Jewish student community to celebrate who they are while building meaningful relationships and strengthening Jewish identity. Most of what I brought back from the general assembly has been helpful for the student leaders and staff who have built the organization from the ground level; considering how early Oregon State Hillel is in its development, we have done a great job. Having tangible evidence of that excites all of us for the future.

The breakout session that meant the most to me personally was about interfaith families. These families will make up the majority of America’s Jewish population very soon, and it made me feel more comfortable about my interfaith upbringing. My biggest surprise of the conference was how people did not mind my “far from traditional” childhood. Even the title of the breakout session on interfaith families was inclusive: They called it “Big Tent Judaism.” If that outlook is continually shared by Jewish leaders as it is on our campus, then the future is bright.

While I was able to learn a tremendous amount about Jewish life and what a Hillel can do, the interactions and relationships built during the process were what made this experience so pronounced. At the end of every day my room was filled with guests and meaningful conversation.

Since the general assembly, I have already been in contact with several students and Jewish professionals I met there. I have no doubt this conference will have a lasting impact on my life.

Steven Nemer, a junior at Oregon State University, is originally from Portland and is now living in Bend. He was one of one of 36 student fellows from around the country who attended the general assembly.