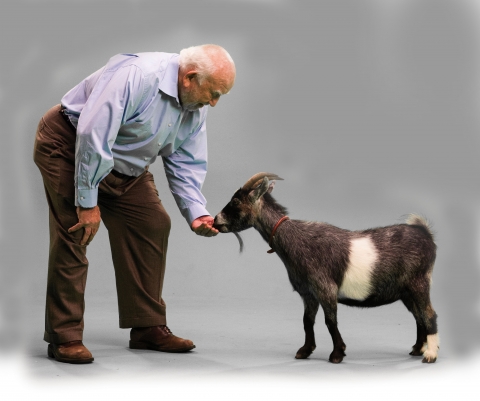 About 30 years ago, Ed Asner tried and failed to convince his rabbi about the importance of Heifer International, so he narrated a documentary to convince others of the project’s unique benefits. This year he was joined by Royal Pains star Mark Feuerstein to create a Heifer at Hanukkah video to encourage other Jews to support a sustainable end to hunger and poverty.

Since 1944, Heifer International has provided livestock and environmentally sound agricultural training to improve the lives of those who struggle with reliable sources of food and income. Heifer provides 30 kinds of livestock and a multitude of trees and seeds to families in more than 42 countries.

The Heifer at Hanukkah website that features the video also offers a variety of gift options that fulfill the responsibilities of both tzedakah (justice or charity) and tikkun olam (repair of the world), “so shoppers can honor a loved one – from Abba (father) to Zaide (grandfather) – with a cow, goat, chicks or water buffalo to help an impoverished family move from dependence to independence.”

Watching the video, the two Jewish actors seemed rather spunky, reminding me of the famous exchange in the first episode of the Mary Tyler Moore Show. News director Lou Grant (Asner) tells Mary, “You know, you’ve got spunk.” Mary takes it as a compliment until Lou adds: “I hate spunk!”

So I asked Asner how his views of spunk compare to those of his famous character.

“I’m in total disagreement with Lou. I enjoy spunk, I certainly do,” he said emphatically in a phone interview from New York City, where he is currently appearing in the Broadway play Grace.

Asner said he first heard of Heifer on an airplane when he was seated next to the son of one of the nonprofit’s founders. Sold on the benefits of the group, Asner told his seatmate to have the organization call him and then shared his new enthusiasm with his rabbi.

“I failed to convince him of the benevolence of the organization,” says Asner, noting that the refusal was likely what drove him to become so involved with the organization. When Heifer International called, he not only made a donation, he narrated “a wonderful documentary they made of their work.”

Listening to Asner praise Heifer, it’s hard to believe he couldn’t convince his rabbi. But he admits he was too tentative. Raised in an Orthodox home, Asner no longer considers himself a religious Jew. However, until last year he says he would attend services each year and serve as a reader for the congregation on Yizkor.

Feuerstein likewise grew up at an Orthodox shul – Park East in New York. Now he and his family belong to Reform congregation Ikar in Los Angeles. But when he is in the New York area filming Royal Pains each year, he still enjoys attending Park East.

“On the High Holidays, and a few others, I will join my dad and my brother in the beautiful turn of the century sanctuary on 67th Street between Third and Lex. It’s nice to see the same rabbi, Arthur Schneier, and president Michael Scharf sitting on the bima and to sing L’Dor V’dor (from one generation to another) with the choir and great congregation,” says Feuerstein.

Dor l’dor is part of the appeal Heifer has for Feuerstein: “Heifer takes us out of our little bubbles and reminds us that there are families in countries all around the world who are suffering, who need sustenance. Further, Heifer does this not by giving a family a fish so it can eat for a day, but by giving a cow so it can be milked, or a chicken so it can produce eggs for years to come. L’dor v’dor, from generations of people to generations of cows and chickens.”

Asked when he realized that as a successful actor he could make a difference in the world by speaking out for organizations working to make the world a better place, he replied: “When my father’s partner’s son, Jordan Rathkopf, asked me to help Heifer International launch this excellent Hanukkah campaign, that’s when! Why actors are given the microphone more often than teachers, doctors, nurses, community workers, etc., is beyond me, but if I can use my exposure to do a little good, then I’m thrilled and honored.”

When the USA Network’s summer series Royal Pains airs a special two-hour holiday special Dec. 16, Feuerstein says viewers will get a taste of two of the values he feels Heifer at Hanukkah promotes: tikkun olam and tzedakah.

“I think Dr. Hank Lawson (Feuerstein’s character) stands for the deepest sense of tikkun olam. He is literally repairing the world around him in every episode, because he takes his Hippocratic oath seriously. Dr. Hank is always looking to help those around him by keeping them healthy and saving lives. And when Evan R. Lawson (Hank’s younger brother) realizes that the amount of money with which he reimburses his cousin Owen was way more than he actually owed, he decides to support his cousin in a way that is perfectly in line with the concept of tzedakah and tikkun olam. I think Hank and Evan are perfect mensches, notwithstanding the actors who play them.”

His Royal Pains role as a concierge doctor in the Hamptons is not the first time Feuerstein has played a doctor. He earlier had a role in Sex in the City that his father was not as impressed with as his recent work: “I think my father will have slightly less of a heart attack from this video for Heifer than he did when he had to watch me (on Sex in the City) play the ophthalmologist (the doctor part was good) who was so bad in bed that Miranda had to fake her orgasms (this part not as good).”

Asner and Feuerstein have one other thing in common – a fondness for Oregon.

“I think Portland and Scottsdale (AZ) are two of the greatest cities in America. Portland for Powell’s Books – best bookstore in America. And Scottsdale for that hike up Camelback Mountain – it’s the perfect hike, length, terrain and view – perfect,” according to Feuerstein.

Asner owned a vacation home on the Oregon coast for many years and his daughter lived in Gresham for about 20 years.

“I loved going to Oregon,” said Asner. “It is one of the most beautiful places you can find. I love its way of life and love its philosophy.”

Mark Feuerstein, best known as the star of USA Network’s Royal Pains, and Ed Asner, famous for his roles in The Marty Tyler Moore Show, Lou Grant and the Pixar film Up, are featured in a new online video at www.heifer.org/heifer-at-hanukkah/. In the video, Mark dresses up as a heifer – the gift that Ed plans to give his granddaughter, which will provide an impoverished family with four gallons of milk a day. “My granddaughter will receive the gift of giving tzedakah,” Asner says. “Kids play with a good toy for a few months or a year, but this gift ends poverty here at home and abroad.”