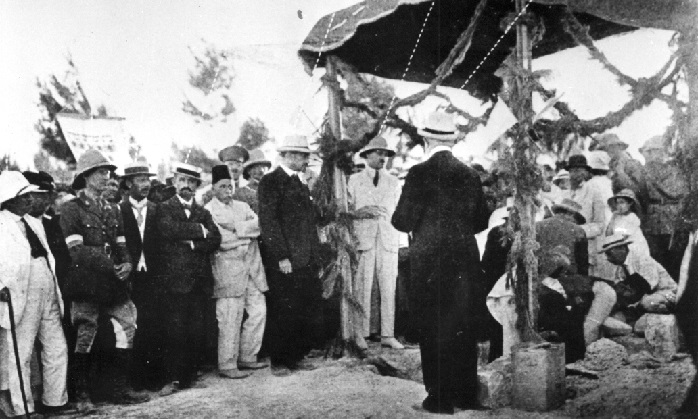 A century ago this week, on July 24, 1918, a historic ceremony took place on Jerusalem’s  Mount Scopus. World War I was not yet over and British troops were still fighting a few tens of kilometers away, in the north, to complete their conquest of Palestine from the Ottoman Empire. Yet Britain had already granted permission to the World Zionist Organization to lay the cornerstone for the Hebrew University of Jerusalem.

Thousands of people, Jews and non-Jews, from Palestine and abroad, came to attend this memorable ceremony. A delegation headed by Chaim Weizmann, president of the Zionist Organization and later the first president of the State of Israel, arrived from Europe for the occasion.

Initially, they decided to place 12 stones, a reference to the 12 tribes of Israel. But in the end, 14 stones were placed, each one representing a specific cause or institution in the interest of recognizing the diversity of the region. The first stone was placed by Weizmann in the name of Zionism. The second stone, in the name of Jerusalem, was placed jointly by two Rabbis, an Anglican Bishop and the highest Muslim authority, the Mufti of Jerusalem. The last stone was placed by four children representing the future generations.

The establishment of the Hebrew University was on the agenda of the Zionist movement since its first congress in 1897 and the cornerstone laying ceremony was an important landmark in its history.

Chaim Weizmann was the only speaker at the ceremony. His address reflected the emphasis on the nature of the university to be, as a research institution:

“No teaching can be fruitful … unless it is strengthened by a spirit of enquiry and research, and a modern University is not only to produce highly trained professional men, but to give ample opportunity to those capable and ready to devote themselves to scientific research to do so unhindered and undisturbed.

This ceremony took place 30 years before the establishment of the State of Israel, but the role of the University in reaching that goal  was apparent then, and emphasized in Weizmann’s speech:

“It is to scientific research and its applications that we can confidently look for the banishment of the twin plagues of Palestine, malaria and trachoma … for the full cultivation of this fair and fertile land … the great value of the University in the building of our national home is apparent.”

A year later, Albert Einstein, already crowned with universal acclaim and recognition as the foremost mind on physics, joined the Zionist movement and became actively involved in the initiative to establish a Hebrew-language university in Jerusalem. To him, this initiative represented a combination of the commitment to his Jewish identity and his belief in the universal values of the pursuit of truth and the respect for every human being.

The years prior to the opening of the university’s doors in 1925 were marked by controversies about the nature of the university during its formative years. One opinion advocated for the university to establish itself as a first-rate research institution with solid international recognition that only later would open its gates to masses of students and grant academic degrees. The other view, motivated by increasing restrictions on the admission of Jewish students in universities throughout the West, was to immediately admit large numbers of Jewish students, even at the price of compromising the quality of the university’s teaching and research capacity.

Fortunately for The Hebrew University, the first position,  strongly supported by Einstein and Chaim Weizmann, prevailed. Had it been the other way around, the University could not have played such an effective role in helping the Jewish community in Palestine, and later the infant State of Israel, cope with medical, agricultural, technological and security challenges, and could not have contributed so significantly to the economic growth of the state.

Einstein served as a member of the University’s first Board of Governors and as Chairman of its first Academic Council. Throughout the rest of his life, he repeatedly stressed the institution’s social and cultural importance for Israel and the Jewish people. As a lasting expression of this special association, he bequeathed his personal papers and literary estate to the university in his last will. This material became the core of the Albert Einstein Archives, which the university has maintained and developed over the years. Thus, Einstein, who gave his name and universal prestige to the Hebrew University during his lifetime, acting as one of its founders, made it the eternal home of his intellectual legacy after his death.

In his congratulatory message, Prime Minister Benjamin Netanyahu declared that Hebrew University has “met the expectations of Albert Einstein, who said it would become a center of wisdom and knowledge. Today the university stands as a center of innovation and creative thinking in all fields.

“You bless the State of Israel with you endeavors, and the Jewish people and the entire human race with your research.”

To mark this milestone, Hebrew University will launch a July 24 “Global Day of Giving,” an opportunity for people all over the world to participate in scholarship and faculty recruitment, helping the university reach new heights of research and innovation.

Today, the founders of Hebrew University, and those who laid the first cornerstones back in 1918, would be proud of all that has been accomplished since. The University has become a home for seekers of knowledge from diverse backgrounds and with diverse intellectual interests. As we look to the next 100 years, Hebrew University will maintain its track record of academic and research excellence, paving the way for breakthroughs in every field – the future cornerstones, upon which many more things will be built.

Professor Hanoch Gutfreund is Andre Aisenstadt Chair in theoretical physics at the Hebrew University of Jerusalem and former president of the university. He is the author of The Formative Years of Relativity: The History and Meaning of Einstein’s Princeton Lectures (Princeton University Press).