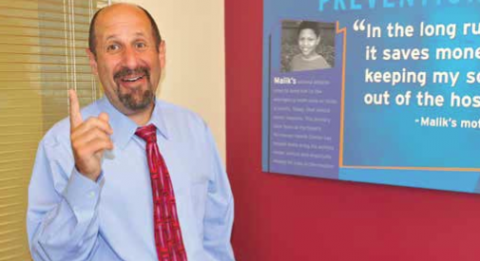 As director of the Oregon Health Authority since its inception in 2009 and a board member of Cover Oregon, which launches the state’s insurance marketplace this month, Dr. Bruce Goldberg is at the forefront of the state’s push to ensure more Oregonians have access to affordable health care.

“Two years into Affordable Care, we estimate we will have 95 to 96% of Oregonians with coverage,” says Goldberg. “That will change hundreds of thousands of lives in this state. It will be wonderful. That is why I went into medicine – to make the world a better place.” Goldberg calls the Affordable Care Act the biggest change in health care in the nation in 50 years.

He says Oregon began the conversation in the 1980s. The first Oregon Health Plan made the right to basic health care “part of who we are, part of the culture of Oregon.” Now Oregon is further along the path to health care reform than most states. Goldberg attributes that to Oregon’s culture, the lack of partisan politics over the issue prevalent in much of the rest of the nation and an abundance of leadership including Gov. John Kitzhaber, numerous state legislators and the state’s health policy board.

The person he doesn’t mention is himself.

“If you spend time with Bruce as a friend, as I have done for the past 21 years, whether in social situations or in various Jewish settings, you would never know that he is one of the pioneers and leaders of health care in the country,” says Oregon Jewish Museum Director Judith Margles. “I say this because he is quite possibly the most modest person I know, down to earth, and very connected with real people. Bruce is truly someone who gives hope, truly someone who loves life.”

Her thoughts are echoed by Rabbi Arthur Zuckerman, who leads Congregation Shaarie Torah, where the Goldberg family are longtime members.

“Bruce does things for the benefit of the community and society,” says Zuckerman. “He’s a quality guy.”

In 2000 Goldberg, his wife, Dr. Ora Botwinick, and their daughters, Levana and Talia, spent a year in Israel, near her parents and four of her siblings. Her father, who died two years ago, was an Orthodox rabbi. Though Goldberg calls “Rabbi Zucky” his Portland rabbi, he says “Ora’s father will always be our rabbi.” While they lived in Jerusalem, Goldberg says he was struck by the fact that “everybody in Israel has access to basic health care. … It’s interesting to reflect on that now” as the United States initiates global care.

“Every day I come in contact in some way with people who don’t have access to basic health care,” he says. “Ora is a physician at a community health center where she cares for many with no health insurance. It’s literally a part of every day for me, and I think for just about everybody in our state and nation. People are afraid illness will bankrupt them; if they have health coverage, they are afraid they will lose it.”

Goldberg is excited about two facets of Oregon health care: the success of Oregon’s coordinated care organizations launched in 2012 and the advent of the insurance marketplace, which, starting this month, Oregonians without insur- ance can use to find the most affordable health insurance or find out if they qualify for the Oregon Health Plan (the state’s Medicaid system). Those whose incomes fall below 138 percent of the poverty level will be in Medicaid, while those above that level can participate in the insurance exchange and get a tax subsidy.

Most Oregonians on Medicaid now received care in one of 15 Coordinated Care Organizations around the state. “We are demonstrating, most importantly, we can improve health. CCOs are held accountable for improving health and living within a budget we can afford. … Until we have a health system that is affordable, we are not going to be able to fund health care for everyone,” he explains.

“Our Cover Oregon market exchange and implementation of the Affordable Care Act will bring health care to so many,” he says. “Over 400,000 people will gain access to basic health care. That is tremendous when you think about the number of people who won’t go bankrupt, the merchants who will no longer be bankrupted by rising health care or lose customers who can’t afford to buy their goods, and families who won’t have to decide between food and medicine. That is real change. … Until Jan. 1, you can be denied coverage because of a pre-existing condition. After January that won’t happen anymore. That is tremendous.”

as tax credits and help with malpractice insurance to encourage doctors to prac- tice in rural areas. Additionally, he wants to see a change in how health care is delivered. Helping people in their homes can keep many out of hospitals and long- term care facilities.

Goldberg has long been an advocate for improving health, not delivering more health care.

He is a family medicine physician who has devoted his career to improving the organization, delivery and financing of public health services. From November 2005 through February 2011, he was director of the Oregon Department of Human Services, where he says he believes he made a positive difference in the lives of many Oregonians. He led the formation of the Oregon Health Authority as the director-designee and was permanently appointed director by Gov. John Kitzhaber in February 2011.

At a 2010 Jewish Federation of Greater Portland Maimonides Society event for health care professionals, Goldberg said, “Health care costs are increasing at a rate we can’t sustain – 10 to 15% per year. … We cannot continue on this paradigm.” He went on to urge investing in prevention and early coordi- nation of care. He said health care would be much cheaper “if everyone gets care early rather than later when it’s expensive and difficult to treat.”

“The problem with the health care system today is we’ve lost our values and sense of community mission and purpose,” he added at that event. “This is a Jewish value … we need to juxtapose the responsibility to ourselves and to the larger community.”

He continues to believe health and not health care needs to be the primary focus.

“Nobody wants to spend more days in the hospital,” he says. For example, Goldberg notes that our nation’s obesity epidemic has given rise to a dramatic increase in diabetes. “We need to focus on how to prevent obesity and diabetes and not on how we treat more diabetics.”

Personally Goldberg, 58, pursues a healthy lifestyle. He relaxes playing har- monica with a 12-piece rhythm and blues band. And he is an avid runner, though he says his knees may encourage a return to cycling. The first time he came to Oregon in 1977, Goldberg says he visited a friend in Eugene, bought a bicycle and rode to Mexico. He later cycled across British Columbia. In the futu
re, he hopes to cycle across the United States – though not to visit his two grown daughters who live in New York: “I’ll have more time to spend with them if I fly.” A recent graduate of the University of Pennsylvania, Talia, 22, moved to New York City to work in high-tech venture capital.

Goldberg and his wife both grew up on the east coast; his family was Conservative while hers was very Orthodox. Both graduated from the Mount Sinai School of Medicine in New York City.

For six years they each practiced medicine in Zuni, NM, where the girls were born. After they moved to Portland, both girls attended Portland Jewish Academy, where, Goldberg says, “They received a great secular and Jewish education.” He describes each of their bat mitzvah celebrations at Congregation Shaarie Torah as very special and unusual. Levana became a bat mitzvah when Rabbi Yonah Geller was the rabbi before the congregation opened the bimah to women. She led an all-woman’s service. On Purim, Talia chanted the Megillah in a triple bat mitzvah celebration with Ilyana and Mara Rosenberg.

Goldberg says he’s not currently active in any other Jewish organizations. “I am affiliated with a middle-aged group of Jewish men, who I play poker with; I don’t know that that’s a sanctioned group,” he quips. Levana, now 27, married Steve Amrock two years ago in New York. She “is very observant, more than her parents,” says Goldberg.

Goldberg says he understands some Hebrew and speaks enough “to order coffee.” But his wife and daughters are fluent and “speak Hebrew when they don’t want me to understand,” a situation that reminds him of his childhood.

“It’s the story of my life with Yiddish and Hebrew,” he complains good-naturedly. “My grandparents and parents spoke Yiddish so us kids didn’t understand.”

But Goldberg is fluent in “Jewish.” When he delivers the keynote address at this month’s Oregon Area Jewish Committee Human Relations Dinner, he plans to talk about health care reform and “tie it into some of our values as Jews.”

Tikkun olam, healing the world, is an obvious tie, he says. But tzedakah is also very relevant.

“Many of us think of tzedakah as charity, but it also means justice and fairness. In health care reform, we are trying to bring fairness to what’s been our system. Some of us don’t get care. What we are trying to do in health relates to values many of us as Jews grew up with.” This year’s OAJC Human Relations honoree is Kaiser Permanente.

“Kaiser and many health care systems in our state have been great partners,” says Goldberg. “They are committed to many of the same goals. They are built around coordinating care. It’s an honor to be part of an event that is honoring Kaiser.”

While Goldberg is pleased with what Oregon has begun, he says sustaining the effort is the biggest challenge ahead.

“Change is hard,” he says. “We’ve begun a lot of changes within the health care system; by no means are we finished. We live in a society where we expect instantaneous results. This will take us years to finish, so it’s hard to not lose focus.”

Oregon health Plan director Dr. Bruce Goldberg will be the keynote speaker at the 2013 Oregon Area Jewish Committee Human Relations dinner honoring Kaiser Permanente Oct. 9 at the Portland Hilton. The annual event is held as a fundraiser to support the equality and social justice mission of the OAJC.

Dr. Jeffrey Weisz, president and executive medical director of Kaiser Permanente, will accept the award on behalf of Kaiser. In his role, Dr. Weisz leads 1,300 Permanente physicians and clinicians who provide care to nearly 480,000 members of Kaiser Permanente in the northwest region. dr. Weisz also sits on the governing board of the National Permanente Federation’s Executive Committee.

“The question we have to ask ourselves is do we want to continue to focus only on managing sickness – or make a shift to managing health?” says Dr. Weisz. “The answer to the health insurance crisis is to address the health crisis. We’re not going to change health care in America until we change health in America.”

The theme of the evening is built on one of the main tenets of Judaism, the ancient Hebrew concept of tikkun olam, which means “repairing or healing the world.” The idea suggests that it is humanity’s shared responsibility to heal, repair and transform the world … to make the world better than we found it.

“Both of our organizations perform tikkun olam every day, each in our own way,” says John Moss, who served as interim director of OAJC until Sept. 1. “Kaiser Permanente builds a stronger safety net for our community by providing access to affordable coverage while delivering excellent care. Kaiser helps people stay healthy and heals the sick. OAJC advocates throughout the community for human rights, respect and dignity for all. Our healing missions align. is it any wonder that we believe Kaiser Permanente deserves to be the 2013 recipient of the OAJC human relations award?”