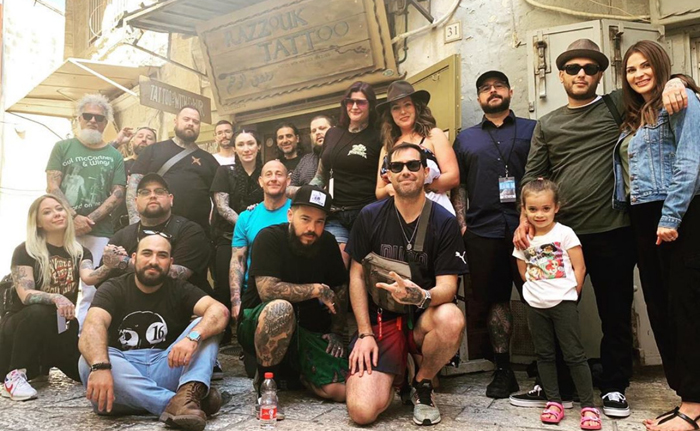 Photo: Healing Ink group in front of Razzouk Tattoo, the oldest tattoo shop in the world located in Jerusalem.

A peace activist and tattooed woman bring two Chicano artists, a Brooklynite, Miley Cyrus’ buddy, Hair Guy, Hippie Girl, Biker Boy and a Freemason to Israel. No, this isn’t the beginning to a weird drawn-out joke, it’s the start of a radical initiative by Healing Ink using the world’s most taboo art form in the world’s most taboo place to tattoo taboo subjects on taboo people in a way that will dramatically change the perception of tattooing and methods for healing.

They don’t just go to Israel. No, they go to the Israel Museum where they tattoo in front of mummies, priceless works of art including Basquiat and Magritte and 5 million-year-old artifacts. They also go to Dizengoff Street in Tel Avivi and tattoo on the very spot where a terrorist took the lives of innocent victims only months prior. Today, it is once again a bustling street teeming with cafes, bars and the energy of the young. But, the undercurrent is still there, that knowledge of what happened.

Tattooing in the Haifa Museum of Art in Israel.

During this trip they tattooed 25 other victims of war and terrorism in these holy sites of art and memory.

The effect is immediate, international and powerful.

Stories are shared, memories made and bonds forged. But, more importantly, and far more seriously, lives are forever altered.

The event was reported in 1,200 newspapers in 5 different languages in 6 different countries.

Tattooing is seen as a serious form of art and a tool for positive, social change.

The survivors of war and terrorism report tremendous healing and strengthening. They wake up joyfully looking at their own body in a way they had not for many years, seeing the power they now possess, overrun with pride. For once, they are comfortable in their own skin. They have ownership of how they present themselves to the world.

War and terrorism, although all too frequent in Israel, are happening around the world and there is no shortage of victims and survivors. Knowing that they can help, Healing Ink is determined to bring this mission forward to help heal all people affected by conflict.

Healing Ink is the only organization in the world pledged to utilize the power of tattoos to ease the physical and emotional pain caused by war and terrorism. Started in 2016, Healing Ink brought eight artists to Israel where they tattooed 25 conflict survivors both inside the Israel Museum and at the scene of a deadly shooting in Tel Aviv. They changed lives, opened perceptions, and saw the need and ability to expand this idea across the globe.

“We have traveled the world and seen the unifying force of tattooing and see its power to heal. Since we cannot prevent the causes of conflict, all we can do is offer survivors a new way to look at themselves and present themselves to others. We can give them the knowledge that they are cared for and that the permanent, powerful mark of a tattoo has helped them reclaim their body and, once again, feel comfortable in their own skin.”

We believe in the healing power of tattoos.
We believe in helping all survivors of war and terrorism no matter their race, religion, or sexual orientation.
We believe that scars are sometimes a painful reminder and that the only way to ease that pain is to create another, more powerful mark on the body.
We believe in the healing power of artists demonstrating their empathy by providing their art, time and positive energy.
We believe that younger generations have needs that can only be met by modern ideas of coping and personal growth.
We are dedicated to our recipients and carefully choose the most talented, most respected and most kind artists for the job.