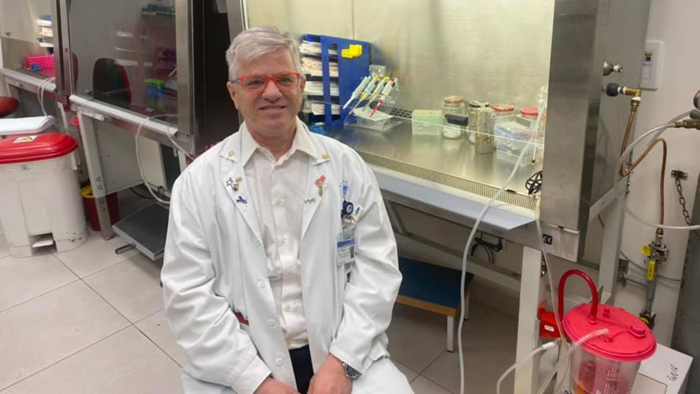 Even with Israel’s world-leading rollout of Covid-19 vaccinations, drugs to treat Covid patients are in desperate need across the world.

Developed over the past six months at the hospital, EXOCD24 stops the “cytokine storm” – where the immune system goes out of control and starts attacking healthy cells – that occurs in the lungs of 5-7% of Covid-19 patients.

“To date, the preparation has been tried with great success on 30 severe patients, in 29 of whom the medical condition improved within two to three days and most of them were discharged home within three to five days. The 30th patient also recovered but after a longer time,” the hospital reports.

“The drug is based on exosomes, [vesicles] that are released from the cell membrane and used for intercellular communication. We enrich the exosomes with 24CD protein. This protein is expressed on the surface of the cell and has a known and important role in regulating the immune system,” explained Dr. Shiran Shapira, director of the laboratory of Prof. Nadir Arber, who has been researching the CD24 protein for over two decades.

“The preparation is given by inhalation, once a day, for only a few minutes, for five days,” Shapira said.

She said the experimental treatment has two unique characteristics. The first is that it inhibits the over-secretion of cytokines. The second is that it is delivered directly to the lungs and therefore has no systemic side effects that injected or oral drugs can cause.

“Even if the vaccines perform their function, and even if no new mutations are produced then still in one way or another the corona will remain with us,” said Arber, director of the medical center’s Integrated Cancer Prevention Center. “To this end, we have developed a unique drug, EXO-CD24.”

Arber added that this advanced preparation “can be produced quickly and efficiently and at a very low cost in every pharmaceutical facility in the country, and in a short time globally.”

Prof. Ronni Gamzu, CEO of the medical center, said, “Prof. Arber’s results for first-phase research were excellent and gave us all confidence in the method he has been researching [here] for many years. I personally assisted him in further obtaining the approvals from the Ministry of Health for further research.”

We reported in October that five Covid-19 intensive care patients were discharged from Hadassah University Medical Center in Jerusalem after treatment withAllocetra.

Nine severe and seven critical Covid-19 patients were treated with Allocetra in the Phase II clinical trial. Fourteen of them recovered and were discharged from the hospital after an average of 5.3 days.

The Phase II trial originally was expected to enroll 24 patients but was “completed early in support of anticipated accelerated regulatory filings of the trial’s positive safety and efficacy data,” Enlivex reported.

Altogether, 19 out of 21 Phase II and Phase Ib Allocetra trial patients recovered and were discharged from the hospital after an average of 5.6 days. Most of the patients in both studies had pre-existing risk factors such as male gender, obesity and hypertension.

“The results we have seen from the 12 Covid-19 patients treated to date with Allocetra are exciting,” said Prof. Vernon van Heerden, head of the General Intensive Care Unit at Hadassah and the lead investigator of both clinical trials.

“The Phase II patients who have been discharged from the hospital are currently healthy. We believe that these compelling results have demonstrated the safety and efficacy of Allocetra in these complicated patients, highlighting the potential of Enlivex’s product candidate to benefit severe and critical Covid-19 patients as well as others suffering from cytokine storms and organ dysfunctions across various clinical indications.”

Allocetra is based on the research of Enlivex chief scientific and medical officer Dr. Dror Mevorach, head of internal medicine and of one of Hadassah’s coronavirus wards. It works by restoring balance to the immune system.

Mevorach said Allocetra “may have utility as a safe and efficacious treatment … regardless of the specific coronavirus mutation that afflicted the patients, and across different life-threatening, high mortality clinical indications with high unmet medical needs.”