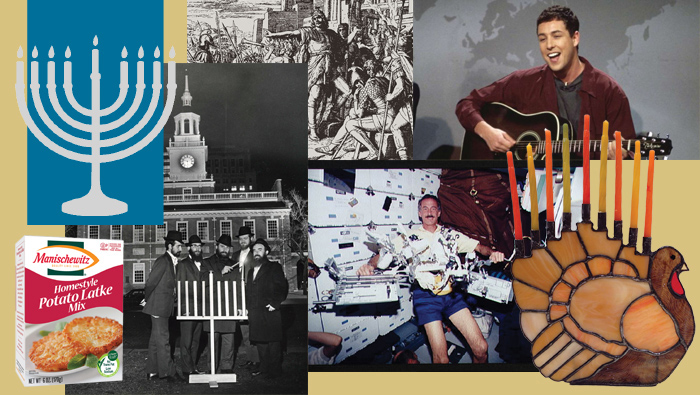 For more than 2,000 years the Jewish people have kept the lights of Hanukkah shining brightly, shepherding the story of the miracle of the oil through the generations. Innumerable Hanukkah celebrations and myriad innovations in how we celebrate have graced the intervening years. I’ll admit that it takes some chutzpah to try and distill two millennia of Hanukkah history into nine great moments; nevertheless, here is my Hanukkah top nine list, presented in chronological order: one for each candle and one more for the shamash or helper candle.

1) Judah Maccabee strikes back. 167 BCE: Taking command of Jewish resistance to tyrannical King Antiochus in ancient Israel, Judah Maccabee, aka “The Hammer,” leads his people to victory over the occupying Seleucid Empire. The desecrated Temple in Jerusalem is subsequently liberated, purified and rededicated. One day’s supply of oil miraculously lasts for eight days. It is this miracle, along with the dedication of the Temple, that we commemorate each year. In fact, Hanukkah means “dedication” in Hebrew.

2) Hanukkah goes electric. Circa 1918: Like Bob Dylan going electric at the Newport Folk Festival in 1964, the advent of electricity made it inevitable that Hanukkah would, too. The first electric menorahs began illuminating the windows of homes and businesses shortly after the end of World War I. These incandescent Hanukkiah demonstrated to the gentile world that the Jews had “made it.” They, too, could take part in the American holiday celebration, but on their own terms. While electric menorahs do not fulfill the mitzvah to kindle the Hanukkah lights, they are still a wonderful decoration and a great way to publicize Hanukkah and to spread the word of G-d’s miracle.

3) Chocolate Coins. Circa 1920s: Loft’s Candy Company, based in New York City, introduces the world to the dubious pleasures of waxy gold foil-covered chocolate gelt. These sweet treats are a Hanukkah favorite of children, who often use them in games of dreidel. Gelt, which means money in Yiddish, was a common Hanukkah gift in the old country. In the New World its chocolate counterpart eventually superseded the exchange of actual money.

4)  First latke mixes. Circa 1950s: While Pillsbury had been running ads in Jewish publications as early as the 1930s recommending its flour for use in latke preparation, and Aunt Jemima, the instant pancake pioneers, had been hawking its mix as “best for latkes” since 1919, the first commercially produced, dehydrated, potato pancake mixes didn’t appear on grocery store shelves until shortly after World War II. These newfangled products liberated the modern housewife from the drudgery of peeling and grating potatoes by hand. Kosher food producers such as Streit’s and Manischewitz led the charge of creating the first wave of processed kosher convenience foods, whose star rose in an age that equated science and industry with progress, not to mention health and sanitation. Packaged frozen latkes soon followed, while the advent of Crisco vegetable shortening in 1911 allowed for sour cream to accompany schmaltz-free latkes. Of course, purists and your bubbe still insist that nothing can compare to the sublime delectability of a hot, crispy homemade latke, made with the one ingredient no processed food contains – love.

5)  First Public Menorah. 1974: Spearheaded by Chabad-Lubavitch as part of Rebbe Menachem Schneerson’s Hanukkah awareness campaign, the first public menorah stood in the shadow of the Liberty Bell at Philadelphia’s Independence Hall. Five years later, in 1979, President Jimmy Carter broke 100 days of self-imposed seclusion during the Iranian hostage crisis to light the new National Menorah erected on the White House lawn by Chabad Rabbi Abraham Shemtov. It has been lit every year since then.

6)  First Hanukkah in Space. 1993: Jewish astronaut Jeffrey Hoffman makes Hanukkah history by becoming the first person to spin a dreidel in zero gravity while serving as mission specialist on the space shuttle Endeavour. Hoffman even brought a small silver menorah onboard. Of course, it could not be lit for safety reasons. In 1997, another Jewish astronaut, David Wolf, observed Hanukkah in space while serving aboard the aging Russian Mir space station. Like Hoffman, Wolf brought a dreidel onboard the station. “I probably have the record dreidel spin; it went for about hour and a half until I lost it. It showed up a few weeks later in an air filter. I figure it went about 25,000 miles.”

7)  The Chanukah Song. 1994: On Dec. 3, 1994, Adam Sandler first performed the song during the Weekend Update segment of “Saturday Night Live.” Both an ode to Jewish celebrities and a gift to Jewish children everywhere, the Chanukah Song spawned two follow-ups and a major motion picture (“Eight Crazy Nights”), becoming a holiday favorite in the process.

8)  First White House Hanukkah Dinner. 2001: The first official Hanukkah dinner at the White House was hosted by Laura and George W. Bush in 2001 and quickly became an annual tradition. The first dinner was a catered affair, with a menu featuring kosher meatballs but curiously no latkes! Subsequent Hanukkah dinners were prepared in the White House kitchen, which was fully kashered for the occasion. For the first time a menorah was lit in the official White House residence. In 2008 the grandsons of President Harry S. Truman and Prime Minister David Ben-Gurion of Israel attended the dinner. Together they lit the menorah given by Ben-Gurion to Truman in 1951, in gratitude for the United State’s recognition and support of the fledgling Jewish State.

9) Thanksgivukkah. 2013: Worlds collide when the first day of Hanukkah is also Thanksgiving Day! A rare confluence of the Hebrew and Gregorian calendars conspired to produce this once-in-a-lifetime holiday mash-up. Thanksgivukkah was the brainchild of marketing specialist Dana Gitell, who came up with the quirky holiday’s name and launched a website, Twitter account and Facebook page devoted to “eight days of light, liberty and latkes!” Nine-year-old entrepreneur Asher Weintraub of Manhattan took it one step further when he invented the “menurkey,” a turkey-shaped menorah designed just for Thanksgivukkah. But perhaps the best thing about this rare event was the endless food possibilities it presented. Latkes with cranberry sauce, challah-pastrami turkey stuffing and pumpkin challahs were just a few of the creative recipes people came up with. While Thanksgivukkah was a blast, we won’t see it again for another 79,000 years. So unless your future plans include having yourself placed in cryogenic suspension for a few millennia, hope you enjoyed it!