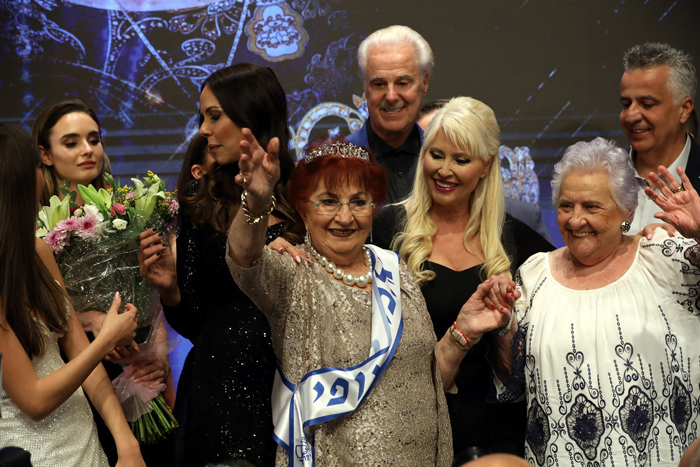 The Friends of Zion Conference and Communication Center hosted on November 16 a beauty pageant for Holocaust survivors, produced by the Yad Ezer L’Haver Foundation in collaboration with the Friends of Zion Heritage Center.  Selena Steinfeld, 86, from Haifa was crowned Beauty Queen.

Upon being crowned, the excited Selena said, “We must be strong everywhere to know how to take care of ourselves, and most importantly, to help each other. Do not leave unhappy people alone.”

Born in 1935, Selena Steinfeld says she will never forget the terrible scenes from the pogrom in her hometown, when she was only five and a half years old. Over 1,700 people were murdered on that day. Selena grew up in the shadow of the Nazis until the Russians liberated Romania. In 1948, she was one of hundreds of illegal immigrants who made their way to Eretz Yisrael. For two weeks, she hid in the bottom of a ship under terrible conditions. Today Selena is surrounded by her three children, seven grandchildren and two great-grandchildren.

Selena, who continues to volunteer and visit other Holocaust survivors at least once a week, said at the event, “This is my personal victory over the Nazis.”

The award was presented by Dr. Mike Evans, a veteran friend of Israel and one of the most influential Evangelical leaders in the world. Evans has been contributing to Holocaust survivors for many years and helps care for their needs.

The ceremony was moderated by Moran Attias, international model and TV presenter, together with Nancy Brandes, entertainer, composer, and musical arranger.